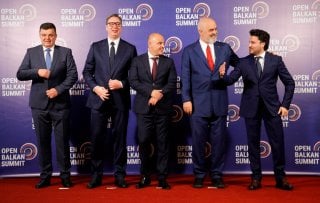 This past August, a group of U.S. senators, led by Senator Jeanne Shaheen (D-NH), introduced a piece of new legislation in the U.S. Congress. The primary intent of this legislation is to increase trade and investment between the United States and the six countries of the Western Balkans and promote the advancement of democracy.

The U.S. senators clearly understand the strategic importance of the Western Balkans region. The clarity of thought throughout the proposed legislation is noteworthy. The design is notable in that it is part history lesson, heavy on common sense, and clear about strategic actions needed going forward. It superbly maps out a formula for promoting the importance of rule of law, good governance, and the establishment of strong institutions to align investment opportunities that will address the many frailties in the region.

Most notably, this proposed legislation does not shy away from calling out the paralyzing effects of corruption and opaque governance. There is the clear language that will drive assistance in developing national anti-corruption strategies—a warning bell—for the all too familiar politicians who savor their false notions of impunity. Their time is running out.

Rich in details that address investment opportunities, infrastructure development, outward migration, and the critical role of women in society, it promotes the importance of EU and NATO integration for countries that desire this path. Simply put, this is a remarkable piece of work. If this legislation is passed and adequately funded it will provide the support needed to launch the region on a path that will realize the very name of the legislation: The Western Balkans Democracy and Prosperity Act.

America seems to be back and this time playing the role of an “economic incubator” for this neglected and poor region of Europe. From a purely economic perspective, overlooking the region’s potential is imprudent. The historical geopolitical security dimensions of the region have likely created a sense of tunnel vision and created a sense of decision paralysis. However, it is easy to feel discomfort because collectively, the Western Balkans fall under the “flawed democracies” and “hybrid regimes” categories, according to the Economist Intelligence Unit’s Democracy Index. The circular election of the same, or same type of, strongmen politicians who measure greatness on their ability to profit from corruption. These same personalities excel in skillfully igniting ethnic and religious tensions to distract the population from understanding their inadequacies as leaders. The political dynamics, combined with the remnants of Ottoman and European cultural practices, make for a complex neighborhood.

America’s geographical distance may be a blessing. The role of the United States has been vital in ending the region’s bloody conflicts in the 1990s. However, enduring peace and stability in the Western Balkans cannot happen without a forcing function for economic and democratic development. The real security challenges in the region stem from the never-ending illusionary promises of transition. Again, we return to the toxic combination of corrupt leadership that continues to breed poverty, partiality in the rule of law, corruption, and organized crime.

With the above as a backdrop, there are the added destabilizing effects of the various cast of nefarious actors: Russia, China, and most recently Iran with its cyberattacks in the region. Russian and Chinese influence in the region harken a new era of strategic competition and illustrate that the Western Balkans are viewed as the exploitable soft underbelly of Europe.

Russian and Chinese unrelenting disinformation campaigns are only one aspect of their efforts to destabilize the region. Russia’s weaponization of its energy supplies and China’s debt trap diplomacy have had a sobering effect on the region. Several key Western Balkan countries are exclusively dependent on Russian energy, which gives Moscow remarkable influence as in the case of Serbia, North Macedonia, and Bosnia-Herzegovina.

The Kremlin’s strategy is to foil any NATO and EU integration of the region. It will continue to use its hybrid warfare toolbox to exploit weak institutions, corrupt politicians, and politicize ethnic and religious tensions.

China has taken a different tactic by approaching the region as a commercial gateway in furtherance of its Belt and Road Initiative. The Western Balkans is a key connector to Western Europe. The region’s poor infrastructure, lack of capital, loose regulations, lax public procurement rules, poor labor regulations, and leadership’s comfort with corrupt practices make it an ideal playground for China’s easy “strings attached” loans and its array of soft power methods to gain influence.

There are currently about 122 Chinese projects with an estimated value of roughly $31 billion, where more than 70 percent is in the form of concessional lending. This makes up almost 40 percent of the total stock of Foreign Direct Investment (FDI) in the five Western Balkan countries excluding Kosovo, which isn’t recognized by Beijing.

Assessing Chinese investment activity is not easy because China typically requires strict confidentially clauses in its investment agreements—clauses that limit transparency and support corruption. This said, the amount of Chinese activity is concerning. According to AidData, about $2 billion of Chinese development aid has been spent in the region since 2000, giving China an undeniable foothold. Chinese projects are well targeted, spanning the gamut from grants to support public administration, donations for agriculture modernizations, schools, debt forgiveness, and Confucius Institutes.

Creating opportunities for young people is a precondition to slow down the massive outward migration and brain drain from the region. This is driven by simple economic and institutional despair. In 2021, the average per capita income of the six Balkan countries was about $7,000—not even 15 percent of average EU income and barely more than 10 percent of U.S. per capita income. The much wished-for economic convergence with the West has clearly not happened.

Trade between the United States and the Western Balkans is minimal. It was less than $1.5 billion in 2021, according to UN Comtrade, while trade levels between the United States and the EU reached $760 billion the same year. Potential U.S. Free Trade Agreements with the Western Balkans would serve as a driver for increasing trade and investment levels and facilitate the region’s integration into the European common market.

A very literate market of 18 million consumers, with a total Gross Domestic Product of $132 billion, the Western Balkans has the potential to become a region of fast-growing economies that could easily connect to the $17 trillion-dollar EU common market. However, the six countries taken together have attracted less than 0.2 percent of the stock of global foreign direct investment, according to the UN Conference on Trade and Development.

Similarly, the total stock of U.S. foreign direct investment in the region is only $900 million, according to the U.S. Bureau of Economic Analysis, compared to the roughly $4 trillion in the larger European Union economy. However, the region is very dynamic in its ability to respond quickly as shown in the case of Albania. In 2021 Albania saw a 70 percent increase in the U.S. stock of FDI (from $99 to $168 million) thanks to new investments in the energy sector.

With the right targeting of investments, the Western Balkans could become a critical hub for “Ally-shoring,” stimulating the production of critical goods within the transatlantic economy. This could be a smart way to build redundancy in key national security sectors and eliminate dependencies on China and Russia. Investments in energy, automation, robotics, and artificial intelligence would prove to be cost-effective investments in the long term and build capacity within the transatlantic community. Investments in these sectors would ultimately jumpstart needed infrastructure projects and create new employment opportunities.

In the final analysis, assisting the countries of the Western Balkans is in the collective national security interest of the EU and the United States. The geostrategic importance of the Western Balkans was clearly emphasized during the U.S.-led Defender-Europe 21 military exercise and demonstrated the critical role that NATO countries and aspirants play in supporting the transatlantic alliance. Its importance was made all the more critical because of Russia’s invasion of Ukraine. The return of conflict to Europe drives home that the vision of a Europe that is free, at peace, and able to prosper must remain our common objective. If not, inaction will forfeit the region to bad actors both within and without.

Turning the tide will not be easy. It will be hard work. But once the current momentum of bad governance is reversed, and investment is directed to jumpstart growth, the magic will begin to happen. As proposed, The Western Balkans Democracy and Prosperity Act is a remarkable piece of legislation and may be the game changer of the century.