Congress Should Appoint a Special Inspector General for Somalia 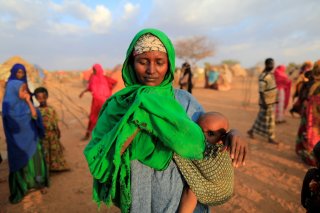 Transparency International released its Corruption Perceptions Index for 2020 at the end of January. Once again, just as in every report since the organization first released a corruption perceptions index one decade ago, Somalia occupies the bottom slot (shared this year with South Sudan) as, in effect, the world’s most corrupt country.

Ten years ago, the Center for American Progress published a report estimating that the international community and Somali Diaspora had collectively spent $55 billion in Somalia since 1991. Despite Somalia’s corruption, the United States has steadily increased its investment in the country in the decade since. Donald Yamamoto, the current ambassador to Somalia who has done more than any other U.S. diplomat in recent years to craft Somalia policy, even threatened to resign if Congress did not act to forgive Somalia’s $1 billion debt to U.S. taxpayers.

By any reasonable metric, that money has been lost. Yamamoto and James Swan, a former State Department Africa hand who now leads the United Nations Assistance Mission in Somalia, now scramble to try to salvage any good news story from Somalia.

Consider that on May 31, 2021, Somaliland, a breakaway region that receives little foreign assistance, will again hold one-man, one-vote elections secured once again by biometric iris scans. The international community spent hundreds of millions of dollars in Somalia in fulfillment of the same goal. Just days before the legal term of incumbent President Mohamed Abdullahi Mohamed, also known Farmaajo, comes to an end, however, Yamamoto and Swan have effectively acknowledged that the money was wasted. They now instead seek to cudgel Somalis into a system in which a few hundred appointed electors will choose the next president.

Yamamoto could not even attend the meeting to shape Somalia’s political future, however, because the billions of dollars to help Somalia’s security he has theoretically overseen has not resulted in a situation where the country is secure enough to enable him to travel three miles from the international airport where he lives to the Somali equivalent of the White House. The Al Qaeda-affiliated Al-Shabaab, meanwhile, has grown in proportion to U.S. investment in Somalia. The group taxes Somalis within sight of Farmaajo’s palace, runs its own court system, and even issues construction permits to those seeking to build new businesses or open hotels in the capital. At best, Yamamoto has wasted billions of dollars, invested into the Somali morass with little to show for it. More realistically, such U.S. funds have greased Somali corruption. At worst, U.S. moneys indirectly fund Al-Shabaab. Left to its own devices, however, the State Department will not only continue business as usual but will circle its wagons in order to prevent any accountability for its role in the Somali disaster.

It is time for Congress to step in and create a special inspector general for Somalia. There is precedent: In 2004, amidst the recognition that corruption compromised U.S. programming in Iraq, Congress created the Office of the Special Inspector General for Iraq Reconstruction in order to provide oversight into the tens of billions of dollars that the United States was investing in Iraq. Over the next decade, Stuart Bowen, Jr., served as inspector general. He and his team uncovered much waste and abuse. Their investigation became the bane of both the State and Defense Department and resulted in twenty-nine different criminal indictments for fraud and abuse.

In 2008, largely because of the success of its Iraq inspector-general, Congress did it again and created the Office of the Special Inspector General for Afghanistan Reconstruction (SIGAR) that provides oversight on the more than $143 billion the United States has invested in its Afghanistan programming. Its reports do not make comfortable reading for anyone who cares about clean government and programs measured more by their effectiveness rather than money spent.

More recently, Congress has also set up a Special Inspector General for Pandemic Recovery. The logic is simple. Whenever U.S. agencies spend billions of dollars (or trillions, in the case of the coronavirus pandemic) with little oversight, corruption spins out of control. Those spending such money may dismiss accountability as a headache and corruption as the cost of doing business. They should not. Corruption is a direct theft from the American people. The U.S. priority should be effective programming not to help diplomats or others to shirk accountability.

Somalia, like Iraq, Afghanistan, and pandemic relief, has become a morass of corruption. The U.S. Embassy in Somalia’s refusal to tackle the problem and its desire to sweep it under the rug may not raise concern in Foggy Bottom, but it should on Capitol Hill. It is time to audit the State Department’s Somalia programming.