A Conspiracy Fever is Raging Across America 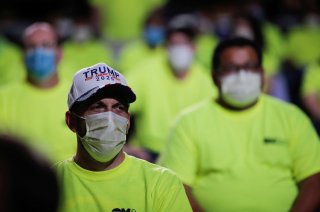 One of them says yes, “what were the real results of the 2020 election and who was behind the fraud?

God responds, “ My son, there was no fraud. Biden won fair and square.”

After a few seconds of stunned silence, the one guy turns to the other and says, “this goes higher up than we thought.”

The joke above may not be laugh-out-loud funny but it captures both a truth and a puzzle that has vexed many for some time: Are God believers more susceptible to conspiracy theories and if so, why?

The ubiquity of conspiracy theories permeating today’s social and political environment is widely known. Also, well known is the emergence of super conspiracists who use powerful pulpits to propagate red meat conspiracies to their insatiable minions in the same manner that a horse trainer feeds fresh hay to a ravenous yearling. Social network algorithms are constantly hard at work recommending the latest conspiracy theories in newsfeeds in order to reap the advertising bounty flowing from conspiracy addicts that are prone to the clickbait.

Conspiracists are living in their golden age. A quick search on Google or YouTube and one finds theories and explanations for the coronavirus (not real), the coronavirus vaccine (dangerous), climate change (profit-making venture for scientists), illegal immigration (the work of liberals ie. Jewish liberals) and of course, the 2020 presidential election (either Donald Trump didn’t lose or he did lose but it was rigged). For those who want to join a conspirator’s support group there is QAnon, which according to recent studies, is the fastest growing sect/religion in the world. QAnon adherents believe in, among other things, a worldwide satanic pedophilia ring led by liberals and Hollywood actors, lizard people, and alien abductions.

While some may find this mildly amusing and assume that this is the domain of uneducated wackos or as Joseph Uscinski put it, “conspiracy theories are for losers,” there is clearly a conspiracy fever raging through some quarters of the Jewish community, which is demographically considered to be educated, professionally successful and religiously conservative. Even more mind-boggling is that one might think that the Jewish community would be more sensitive than most to the dark underbelly of conspiracies since historically, most conspiratorial movements end with antisemitism and Jewish scapegoating. How then does one explain this phenomenon?

Karl Popper famously described conspiracy theories as “the secularisation of religious superstition,” and the abandoned gods replaced with, “the learned Elders of Zion or the monopolists or the capitalists.” In other words, conspiracy theorists substitute religious myth, apocalyptic and/or paranormal beliefs with conspiratorial beliefs. If religious epistemic thought posits an invisible, omniscient, and omnipotent being that controls the world behind closed doors, then conspiratorial epistemic thought replaces god with cabals, elders, bankers, the deep state, etc., that do the same.

Widespread anxiety and fear are everywhere today, which is not surprising since everyone is grappling with the coronavirus, political discord, economic dislocation, and social unrest. Everyone is looking somewhere for hope, clarity, and answers to life’s challenges and adversity. Religionists find agency and control in a theocentric worldview in which God has a plan, albeit shrouded in mystery. Those without a God, according to Popper, must find it elsewhere. Hence, the explosion of conspiracists in times like ours.

Yet, Popper’s theory should not apply to God-fearing people as they seemingly have no need for the secular god of conspiracy. So what is at work here? Might there be a direct epistemic link between religionists, those with a strong belief in God, and conspiracists?

In a February 2019 study in the British Journal of Social Psychology, Inga Jasinskaja-Lahti and Jolanda Jetten found that among believers, the importance attached to their religious worldview was directly associated with higher belief in conspiracy theories. The more serious and profound a person’s religious worldview, the more susceptible to conspiracies. Fair enough and the study would seem to reflect the facts on the ground but what about the elusive answer to what is

it about a religious worldview that accords with a conspiratorial one?

In 2007, Episteme: A Journal of Individual and Social Epistemology published an article written by Brian Keeley, a professor of philosophy at Pitzker College. Keeley attempted to explain this phenomenon in his article. He suggested that religionists and conspiracists share an epistemic foundation of a hidden or concealed activity that cannot be rejected a priori. In other words, to both the religionist and conspiracist, the lack of proof of a God (religionist) or a secret cabal (conspiracist) is not an argument against the existence of that cabal or God.

For Keeley, a conspiracy theory is “a proposed explanation of some historical event in terms of significant causal agency of a relatively small group of persons—the conspirators—acting in secret.” Replace, “of a relatively small group of persons,” with the word “God,” and you have the definition of a religionist. It is a powerful epistemic analogy that deserves to be taken seriously but his conclusion, that the religionist should adopt an agnostic posture to God just as the conspiracist should to conspiracies, is both untenable for the person of faith as well as unnecessary.

Keeley’s analogy presents the person of faith with an epistemic gordian knot, but like Alexander the Great pulling the knot from the pull pin, not an unsolvable one. Yes, both religionists and conspiracists believe deeply in causal forces that are unseen and draw comfort

and a sense of agency from that belief. But to avoid the slippery slope from religionist to conspiracist, the person of faith merely has to integrate theological humility into their religious worldview.

Theological humility demands a commitment from the believer to make room for him or others to question and challenge foundational beliefs. Belief and questions are not a zero-sum game. In fact, it could be argued that the combination is accretive and reaffirming. Deep, meaningful faith mediated by reason, science, and data is not for the religious man an unconditional surrender to the forces of heresy. Rather, it is a powerful demonstration of theological confidence and religious rootedness.

The first step in avoidance is awareness. The Keely analogy suggests that religious epistemology makes the person of faith vulnerable to the rat hole of conspiracy. That may be true, but the awareness of this trap plus a dose of theological humility mitigates the threat without resorting to agnosticism.

Keith Zakheim is the chief executive officer of the Antenna Group.