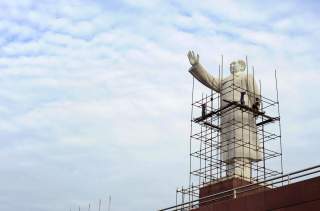 GEORGE F. Kennan did not consider his original concept of containment to be applicable to China. But if the legendary Soviet expert were alive today, he might well endorse a strategy aimed at limiting Chinese influence in East Asia relative to that of the United States—which is what Chinese leaders today call “containment.”

In Kennan’s formulation of his doctrine, containment was aimed exclusively at preventing the expansion of Soviet communist influence or control over areas that were strategically vital to the United States. During the period that he had official responsibility for implementing that strategy—as director of the State Department’s Policy Planning Staff from 1947 until 1950—he explicitly excluded China from it because he doubted that the Chinese communists would fall under Soviet control and, even if they did, China in his view was neither strategically important nor a potential threat to the United States. Indeed, Kennan excluded the entire mainland of East Asia—including the Korean Peninsula and Indochina (later Vietnam)—on the same grounds. In the early years of the Cold War he was prepared to accept Soviet domination of continental East Asia—if it came—as something that would be unfortunate but tolerable. Accordingly, he played a key role in justifying U.S. disengagement from the Chinese civil war, favored withdrawal of U.S. occupation forces from South Korea, and warned against supporting or inheriting the French role in Indochina.

The only place in the Far East where Kennan deemed containment applicable was Japan, which he considered both vital to U.S. interests and vulnerable to Soviet influence—in effect, the East Asian counterpart to Germany in Europe. He consequently played a pivotal role in redirecting U.S. occupation policy in Japan away from a punitive approach and toward reconstruction, akin to the Marshall Plan in Europe and for the same purpose: to insulate it against any Soviet designs. As Kennan wrote in 1948, Washington needed to

“devise policies with respect to Japan which assure the security of those islands from Communist penetration and domination as well as from Soviet military attack, and which will permit the economic potential of that country to become again an important force in the Far East, responsive to the interests of peace and stability in the Pacific area.”

Kennan, in fact, was arguably the first proponent of the “defensive perimeter” concept, which became the de facto basis for U.S. strategy in the western Pacific before the Korean War.

The outbreak of the Korean War, however, subsequently undermined Kennan’s strategic vision for a peripheral application of containment in East Asia. It led to a long-term U.S. military commitment on the Korean Peninsula, provided the rationale for both the retention of U.S. military bases in Japan (which he had advised against) and U.S. aid to the French in Indochina, and essentially reinserted the United States into the Chinese civil war through a defense commitment to Taiwan. All of this eclipsed Kennan’s plan for only an offshore and non-military version of containment in the region.

The Sino-Soviet split that developed over the next decade validated both his prediction that the Soviets would not control the mainland of East Asia, and his rationale for not applying his doctrine of containment there. He wrote in 1967 that the Sino-Soviet rift was “the greatest single measure of containment that could be conceived. It not only invalidated the original concept of containment, it disposed in large measure of the very problem to which it was addressed”—that of counterbalancing the international influence of Soviet communism.

But what of the threat of Chinese communism itself? Kennan originally dismissed it on the grounds that under any government Beijing would never have the capacity to project power in ways seriously inimical to U.S. interests. In a speech in 1966, he noted that he had originally identified five strategic power centers in the world where containment applied: the United States, the United Kingdom, continental Europe, Japan and Russia itself. “Please note,” he observed, “that China did not enter into this category. I personally do not consider that it enters into it today.” Containment was about keeping the other power centers outside Soviet control. China was beyond that scope, even though it was under communist control, because it was not under Soviet communist control, and in any event was not in Kennan’s view a strategic power center. Consequently, although he deemed a communist China undesirable and regrettable, it was “not an intolerable threat, in itself, to world peace, and does not represent anything we cannot live with for a good long time.” Kennan acknowledged the implicit threat of Chinese communist expansion elsewhere in Asia, but he concluded that this appeared to be possible only in areas that were neither strategically important to the United States nor capable of posing a substantial military threat if they fell under Chinese communist control. These circumstances, in Kennan’s view, further negated the applicability of his containment doctrine to Chinese communism. And he never accepted its applicability to Vietnam. Indeed, he became an eloquent and influential critic of the American war there.

Kennan reaffirmed this view in the 1970s, reiterating that containment did not have “any great relevance” to China because it was not a “highly expansive power” except with regard to its prior territorial claims (especially Taiwan) and did not appear to be trying to impose “direct Chinese domination” over neighboring countries. Again, he specifically excluded Southeast Asia on the grounds that Chinese communist control there would do “no irreparable damage, from the standpoint of our interests,” and because he calculated that any Southeast Asian communist regime would more likely play Moscow and Beijing off against each other than be a puppet of either.

IN MY view, Kennan’s dismissal of China’s strategic potential, not to mention the strategic relevance of both Southeast Asia and the Korean Peninsula, was uncharacteristically shortsighted. It also belied his own judgment about the implications of the Sino-Soviet split, which greatly enhanced China’s strategic value to the United States in ways he recognized and acknowledged.

But more fundamentally, Kennan also recognized that communist China did not—and does not—represent the kind of threat the Soviet Union posed during most of the Cold War, and which had provided the basis for his containment doctrine. In the July 1947 “X” article in Foreign Affairs (“The Sources of Soviet Conduct”) in which he introduced his doctrine, Kennan specified that Soviet ideology was founded on the “basic antagonism between the capitalist and socialist worlds” and had taught Soviet leaders “that it was their duty eventually to overthrow the political forces beyond their borders” and that there could “never be on Moscow’s side any sincere assumption of a community of aims between the Soviet Union and powers which are regarded as capitalism.” Chinese communist leaders never fully subscribed to this outlook, to such a zero-sum goal, or to the need to impose “direct Chinese domination” beyond China’s borders. Moreover, they have moved beyond any belief in a fundamental antagonism between capitalism and socialism: their “socialism with Chinese characteristics” is essentially a merger with capitalism. And Xi Jinping’s promotion of that developmental model at the Chinese Communist Party’s Nineteenth Congress in October 2017—contrary to prevailing misinterpretations—is not aimed at supplanting capitalism with world socialism. Instead, Beijing is genuinely pursuing a “community of aims” with Western powers—also contrary to conventional wisdom. Kennan did not wholly anticipate this, but he no doubt would appreciate the differences between China today and the Soviet Union—and especially acknowledge that China does not meet his description of the Soviet Union in the “X” article as lacking “real evidences of material power and prosperity” to back up its external ambitions. For these reasons, he would recognize that China does not merit a containment strategy as he originally conceived it, nor could any such strategy succeed against China.

Paradoxically, however, Kennan came to advocate elements of an approach to China which arguably were not substantially different from many of the policies he formulated toward the Soviet Union. In a speech in 1960, after a decade of Chinese animosity toward the United States in the wake of the Korean War, Kennan asserted that it was a vital U.S. interest to erect “firm barriers” to what he characterized as “contemporary Chinese imperialism,” and specifically to “see to it that the major archipelagos and islands lying off the coast of East Asia do not become susceptible of exploitation by mainland forces hostile to the peace and freedom of the Pacific community.” In another speech four years later, he observed that Beijing’s communist leaders hated the United States because of its “temerity to stand in their path and to obstruct the expansion of their power.” Kennan said the United States had “no choice but to place ourselves in that path” in order to preserve the post–World War II regional balance of power and to prevent the emergence of “an Asia dominated by people so prejudiced against us, ideologically, as the Chinese Communists.” He insisted, however, that Washington was only seeking to prevent the extension of Chinese communist power to “those insular and peninsular appendages of the Asiatic continent”—this time including South Korea—and emphasized that the U.S. approach was wholly defensive, not “purely, or even primarily, a military” strategy, and not aimed at overthrowing the Chinese communist regime.