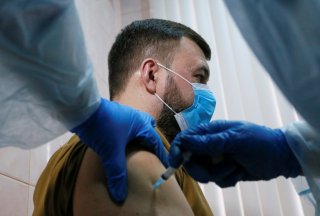 Russia’s Sputnik V vaccine is as reliable and effective as a Kalashnikov rifle, according to one infectious disease specialist in Austria. The comparison is especially apt, as the vaccine takes an increasingly active role in Russia’s information warfare.

For a country like Ukraine, one of Europe’s poorest, and with a post-Soviet health care system ill-prepared for the ravages of the coronavirus, the news of Sputnik V’s machine-gun-like efficacy should be news to rejoice over. The coronavirus has infected more than 1.24 million Ukrainians and killed over twenty-seven thousand of them, and although Ukraine has inked deals with several vaccine providers, including China’s Sinovac Biotech and the COVAX initiative, the number of vaccines procured falls tens of millions short of Ukraine’s need. Why then did the Ukrainian government ban it outright in early February?

Ukraine has lagged behind other countries in Europe in beginning its vaccination program and it’s getting off to a fairly inauspicious start. The first delivery of vaccines arrived just last week, and already reports are filtering in of unused shots being thrown away. Even Ukrainian doctors are skipping their vaccine appointments.

Vaccine hesitancy is a growing problem worldwide, but its effects are especially acute in Ukraine, where people’s existing anxieties about the safety and efficacy of poor-quality medicines have been exacerbated by targeted disinformation campaigns orchestrated by Russia. As it stands, only around 47 percent of Ukrainians feel comfortable getting a coronavirus vaccine.

Even before the coronavirus pandemic, Russian trolls were hard at work undermining what little faith there was in Ukraine’s healthcare system, sowing falsehoods about vaccines that have been linked to outbreaks of diseases previously eradicated from Europe. These days, the disinformation that led to children being stricken with measles and paralyzed by polio has taken on a slightly different character. Not all vaccines are the enemy. Just western ones.

“Western vaccine manufacturers rely on experimental, little studied and not proven in the long-term technologies, encountering obstacles in their clinical trials,” says Kirill Dimitriev, head of the Russian Direct Investment Fund, the development agency responsible for the funding and distribution of Sputnik V. Other claims report that Western vaccines have terrible side effects or that big pharma is conspiring to get us all. These claims, which have permeated social media throughout Europe and the United States, aim to promote Russia’s vaccine sales, and secondly to undermine legitimate sources of information, lest anyone in the scientific community call attention to the way in which Russia played fast and loose with two million lives over the course of its vaccine development.

To add insult to injury, Russia is administering Sputnik V jabs to the three million Ukrainians living in the occupied territories of Donetsk and Lugansk, prioritizing medical personnel and the soldiers fighting against Ukraine. At the same time, it is dangling the prospect of vaccines in front of Ukraine. “Is shunning Moscow more urgent for Ukraine's leaders than saving lives?” one RT headline taunted.

This is pure, unadulterated gaslighting. Ukrainian misgivings about Russia’s vaccine diplomacy are justified. They face a political no-win situation. The minute they accept Russian vaccines, the Russian media will have a field day at Ukraine’s expense.

They should use Sputnik V anyway.

Even though Russia cut some serious corners developing Sputnik V, combining Phase I and II trials, and approving the vaccine with zero evidence it protected anyone from the coronavirus, the Phase III results are in, peer-reviewed and double-checked, and they’re pretty much bullet-proof. Sputnik V will save lives. (Although so will its Western competitors.)

It would be nice if insecure Russia could have enough confidence in its accomplishments to allow them to speak for themselves. After all, it wasn’t terribly long ago that the United States and USSR teamed up to wipe out smallpox. Now, they’re sowing the seeds of a global health disaster that can only be combatted with evidence-backed science. Ukrainian leaders need to point to the data.

Lillian Posner is a program assistant for Russia, the Middle East, and Asia Pacific at the Center for the National Interest. Twitter @LillianPosner.