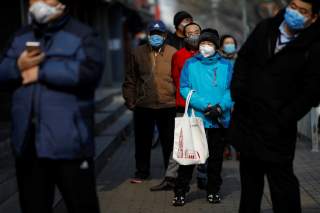 The Year of the Rat bodes ill for China as the worst public health crisis in decades continues to develop in its backyard. The coronavirus—first discovered in Wuhan—has now infected forty thousand people and killed almost one thousand of them across nineteen countries. These numbers are rising exponentially and impacting the protests in Hong Kong, which are now fueled by the virus outbreak. Thus, this proves for Asian investors an age-old truth that it's never a good thing to put all your financial eggs in one basket.

The financial flows coursing through Hong Kong, a former British colony, is a lifeline for Beijing and is now in jeopardy; the loss of that prestige comes with a sting.

China’s ambitious Belt and Road plan is under threat because of the epidemic. In fact, the coronavirus may be the worst blow to the precarious economies of China, to the Far East, and beyond. The virus is threatening to trigger a global recession, which is something that terrifies the Chinese leadership. The outbreak, which came amidst China’s Lunar New Year celebrations, known as the largest annual migration of humans in the world, has now shut down factories, schools, and government offices. Beijing is taking extreme steps to fight the epidemic.

Therefore, China is hedging its bets in order to provide attractive financing for its ambitious One Belt One Road program that weaves its way through Central Asia on its way to Europe, Russia, and the Middle East.

Due to the recent upheavals, the Astana International Financial Center (AIFC), located in Nursultan, the capital of Kazakhstan, is well on its way to becoming the beneficiary of Beijing's financial backing. It is notable that American, European and Russian investors have been involved since its inception.

The facility is a world-class brainchild of Kazakhstan's former president, Nursultan Nazarbayev, who pushed to bring Kazakhstan into the twenty-first century and to build an international business and financial center.  Other policies of modernization include English language education in high schools, and even switching the alphabet from the Soviet-imposed Cyrillic to Latin.

AIFC is an emerging capital market, with a securities exchange, application of the English common law, an independent court and arbitration system complete with high caliber British and international lawyers, an Islamic finance center, and a financial startup incubator. The official language is English; there is a preferential tax regime.

“For us, a key indicator of efficiency, given that we do not collect taxes from financial institutions, will be the volume of attracted foreign investments,” said the governor of the International Financial Center Astana, Kairat Kelimbetov. “We believe that this is common sense. Tens of billions of dollars in investment is the creation of new jobs, this is an increase in consumer demand in our country, and for us, this will be a big plus."

The obvious draw of the AIFC is its geographical location. Situated between Europe, Russia, China, the Middle East, the Caucasus, the Caspian Sea, and right in the middle of Central Asia, Nazarbayev's brainchild can draw business from multiple directions and connect both sides of the trade from these intertwined regions.

For these reasons, Chinese investors have stepped up to the plate.

"Another equally promising opportunity lies with mid-cap companies in Russia, Kazakhstan, Belarus, Georgia and other countries in the region that are eager to engage with Chinese investors, and we are helping to bring them together," declared Kelimbetov.

Foreign direct investment (FDI) is a primary goal of AIFC.

“We must clearly understand that attracting foreign investment will develop the economy and allow us to solve the issue of the quality of life of the population, create new jobs and solve social issues,” Prime Minister Askar Mamin said in a note on April 22.

AIFC should also bring benefits to the local population.

Among the priority goals of the AIFC are the development of the human resource potential of local financial market specialists, the popularization of international professional certifications, and boosting investment, reported Norway News.

Liu Shaotong, executive vice-president of the Shanghai Stock Exchange, a partner of the AIFC, said several Chinese securities companies have been doing business in Kazakhstan, taking part in the development of the country's capital market.

“The Shanghai Stock Exchange is a 25 percent shareholder and they are contributing staff and resources but more importantly they are providing a gateway for us to talk to Chinese funds, Chinese brokers,” AIX Chief Executive Timothy Bennett, who has previously run New Zealand’s NZX bourse, told Reuters.

Kazakhstan considers itself the ‘buckle’ in the Chinese Belt and Road project.

“The AIFC (Astana International Financial Centre) was created as a regional financial hub, to connect investors with promising projects that require financing to realize their full potential. The Belt and Road Initiative (BRI) is a clear and important priority for us,” said Kelimbetov.

As New York City discovered after the attacks on 9/11, geographic diversification is a very good thing. There are not many financial firms in America that have their only footprint in the Wall Street area downtown. They are dispersed into Connecticut, New Jersey and beyond.

“Astana should become the main financial hub of the region and in the long-term perspective should be among leading Asian financial centers,” Nazarbayev declared at the start of the initiative.

His vision may be confirmed—due to the upheavals and the epidemic China is going through today.

L. Todd Wood is a writer and a publisher. He was a Special Operations combat missions helicopter pilot and a Wall Street emerging markets bond trader.