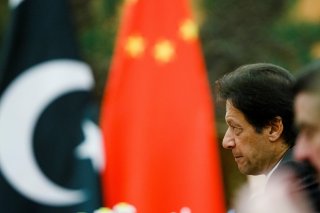 Pakistan had already been nearly a year into an onerous International Monetary Fund structural adjustment program when the coronavirus hit the world. While it’s too early to tell how the country will fare from a public health perspective, the consensus view of the multilaterals and Pakistan’s state bank is that the lockdown will drive economic growth into negative territory this year for the first time in the country’s history.

Unlike many other emerging markets, a significant post-pandemic economic bounce is not expected in Pakistan. Growth in the years that follow is projected to be in the two percent range. This low growth trap, combined with escalating U.S.-China tensions, will test relations between Beijing and Islamabad unlike ever before.

With the launch of the Belt and Road-linked China-Pakistan Economic Corridor (CPEC) in 2015, the relationship between Beijing and Islamabad took on a more robust economic dimension. Several years prior to CPEC’s launch, China had emerged as the largest source of foreign direct investment in Pakistan. But the relationship had largely been relegated to the diplomatic and security domains—albeit with ample achievements.

The grounds for strategic cooperation between the two countries have been clear. For both, India is an adversary or competitor. China has defense equipment to sell. Pakistan has defense equipment it needs to procure—and Western suppliers are unreliable. China has faced low-level terrorist threats. And Pakistan had at some point been home to many of those terrorist groups. China seeks influence in the Indian Ocean region. Pakistan, which is contiguous to China, has an Arabian Sea coastline of roughly seven hundred miles.

Their economic cooperation, however, rests on shakier ground. Chinese officials have described CPEC as a “flagship project” of the Belt and Road Initiative (BRI), but they don’t quite explain how exactly CPEC fits into BRI—which has become an amorphous behemoth anyway. The details of CPEC—at least in the public realm—are left to the imagination of fast-talking Pakistani officials as well as semi-official spokesmen channeling their inner Robert Kaplan. Few discuss what is being developed on the Chinese side of the border.

The branding of CPEC as a bilateral economic corridor conjures visions of robust trade between the two countries through roads, railways, and pipelines connecting them. One would have assumed that both sides chose infrastructure projects based on assessments of their economic synergies—for example, Pakistani minerals and meat making their way to China, and returning trucks bringing intermediate manmade textiles to Pakistan.

Two years ago, it was already clear that those assessments had not been made. CPEC suffered from a paucity of planning. It is far from the “game-changer” Pakistani officials claim it to be. Astonishingly, the chief economist of the previous Pakistani government told Reuters in 2017 that CPEC would result in $6-8 billion in annual tax and toll revenue for Pakistan. And while overland trade between China and Pakistan has grown steadily in recent years, the Gwadar port—portrayed as the lynchpin of CPEC—remains more or less idle.

There is little evidence that CPEC is part of a Chinese “debt trap.” But the fundamental nature of the program has been flawed. It is heavily weighted toward debt-driven investments. And little has been asked of Pakistan (as well as other BRI countries) in terms of sustainable reform.

CPEC, much like the Belt and Road elsewhere, testifies to the strength of the lure of easy financing for rent-seeking elites, including Pakistani provincial chief ministers and managers of Chinese state-owned enterprises.

A considerable part of the upwards of corridor program, once valued at $62 billion, has become a reality. Around $20 billion in projects, mainly in energy, have been completed or are under construction. That is no mean achievement in a country like Pakistan. But rather than transforming the Pakistani economy, CPEC has worsened the country’s pre-existing condition: perpetual economic disequilibrium fueled by consumption-driven growth.

With an eye on the 2018 general elections, the previous Pakistan Muslim League-Nawaz (PML-N) government in Islamabad went on an energy and infrastructure building spree. It gambled with Chinese money.

Growth nearly reached six percent and was quickly followed by yet another bust. The PML-N neglected the external sector as it ramped up energy and electric-power sector imports. Under its tenure, exports experienced a net decline over a thirty-three-month period, sowing the seeds of Pakistan’s current economic crisis as well as its potential next one.

When Pakistan entered into its twenty-second IMF program last summer, the challenge was to compress domestic demand and refigure how its economy grows, tilting more toward exports. But in the leadup to the IMF bailout, Pakistan ramped up borrowing to finance its imports. External debt has grown by 25 percent over the past two years.

The current account deficit has been reduced significantly—at great cost to the country’s growth. The only way toward a path of rapid sustainable growth is in exports and foreign direct investment (FDI). CPEC, particularly its second phase, had been seen as a crucial vehicle toward building Pakistan’s exports and attracting diverse FDI. But it may actually end up helping keep Pakistan in a low-growth trap.

The incentives provided to investors both domestic and foreign, through CPEC and Pakistan’s broader energy policy, diverted money away from value-added industries and instead toward the power sector. Rather than invest in, for example, export-oriented textile factories, investors flocked toward the energy sector, with high guaranteed rates of return and lucrative capacity payments. Other than the automotive sector, Pakistan has attracted little manufacturing FDI. The government paid little attention to the reforms necessary to pull in investment. And the high electric power prices put Pakistani industries at a disadvantage.

Pakistan’s energy binge was based on assumptions of high levels of growth. But the economy has come to a crashing halt. It now has a massive surplus of electricity. And that electricity is comparatively expensive. For a decade, Pakistan has struggled to manage its power sector arrears—the so-called “circular debt.” Now, thanks to a glut of electric power supply, it faces another challenge of growing capacity payments.

Pakistan’s power sector continues to be a ticking time bomb. Arrears in the industry, which follows a single-buyer model, have now ballooned to over $10 billion. Capacity payments to independent power producers, a large share of which are Chinese state-owned enterprises, will surge from $5.6 billion this year to $9.3 billion in 2025.

While the government of Pakistan power sector liabilities to China grow, so too does its debt to China. Roughly a third of Pakistan’s $28 billion in external debt repayment obligations over the next three fiscal years are to China (mainly short-term, non-CPEC loans).

Pakistan has requested that Beijing forgive or reprofile its debt and allow for the renegotiation of power purchase agreements (PPAs). Islamabad appears to be building its case. It just released a lengthy report alleging rampant fraud among independent power producers, including Chinese project sponsors that inflated their costs. The Pakistani government report claims that a high-voltage transmission line being built by a Chinese state-owned company was more than twice as expensive as a similar line constructed in India by a European company.

China has made clear that it is disinclined to forgive the debt. And it will likely resist renegotiating PPAs, which form the heart of CPEC today.

The vast majority of CPEC projects are commercial electric power plants, which have been as expensive or more expensive than projects in other regional countries. CPEC is by no means a gift to Pakistan. It has been a boon for Chinese state-owned enterprises as well as segments of the Pakistani elite.

Pakistan is learning the hard way that business between friends is still business. Beijing has intervened on behalf of Chinese state-owned companies locked into disputes with Pakistani regulators in tariff negotiations. If improving Pakistan’s export competitiveness was a priority for China, then it would not insist on exorbitant PPAs. But CPEC, on the whole, is not aid. Beijing wants to get paid. Indeed, for years, Beijing pressed Islamabad to establish a “revolving fund” that would guarantee payment to Chinese electric power producers by ensuring liquidity. Providing such a privilege for Chinese investors alone comes at the cost of reforming the power sector and disincentivizes investment from other countries.

The sovereign debt portion of CPEC would more than double should Beijing and Islamabad move forward with the $9 billion revamping of Pakistan’s main railway line, the ML-1. Already, Pakistan will struggle to repay loans for a municipal railway line in the city of Lahore, which had been delayed for years and was set to launch this March until the coronavirus hit. Should the train begin operations, social-distancing requirements might lower ridership, depressing revenue.