Could 1989 Have Led to Democracy in China? 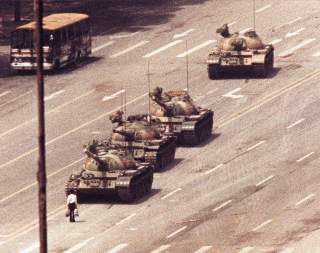 There are two great “what if” questions in modern Chinese history. The first was in 1949, which is when China fell to the Communists. What if the Nationalists had been more effective on the battlefield? What if the United States had given them more support? What if Chiang Kai-Shek had won the civil war instead of being exiled to Taiwan? What if? Well, in all likelihood, a Nationalist mainland China would look a lot like Communist China does today, only with different families in charge.

The second great "what if" is 1989, and it's much more important. It's when China almost turned toward democracy. Lest we forget, in 1989 the Nationalist government on Taiwan was just as much a one party dictatorship as the Communist government on the mainland. Taiwan didn't hold its first real elections until 1992. Yet Taiwan has since emerged as one of the world's most robust democracies. If it could happen on Taiwan, it could happen in China.

What if it had? What if China's hardline military ruler, the eighty-five-year-old chain-smoker Deng Xiaoping, had passed away at the beginning of 1989 instead of hanging on for another seven years? What if the reformist Zhao Ziyang, already General Secretary of the Communist Party, had emerged before the protests as China's new paramount leader? What if the students in Tiananmen Square had peacefully dispersed, but continued to work quietly for democratic reform throughout the 1990s? The Tiananmen Square protests might now be celebrated as the fount of Chinese democracy.

Of course, it didn't happen. But it could have happened, and it almost did. The Tiananmen Square protest movement didn't have to end in tragedy on June 4, 1989. It all came down to the decisions of a few old men, and that mysterious randomizer of history: timing.

If China had turned toward democracy in 1989, then it might have followed the pattern laid down by Taiwan. In Taiwan, the transition started with the lifting of martial law in 1987, but it took another fifteen years for elections to become truly competitive. And in many ways, Taiwan's democracy is still a work in progress.

For example, the former ruling party, the Nationalist Kuomintang (KMT), is still in the game. In fact, its official symbol is still embedded in Taiwan's flag. The KMT is even locked in a dispute with the current government over historical party assets, which have been officially declared at nearly $600 million. No one knows how much more may have leaked out of party coffers and into individual bank accounts during the transition period.

Other East Asian countries that made the transition from one-party states into competitive democracies also went through gradual processes that saw the former authoritarian rulers survive and even thrive. In Singapore, the People’s Action Party (PAP) has continuously widened political participation while never actually giving up power. In South Korea, it wasn’t the former ruling party but the former ruling families who kept their wealth when the country democratized.

A hypothetical Chinese transition to democracy would probably have followed the East Asian pattern, not the Eastern European one. In Eastern Europe, the Soviet Union didn't so much democratize as disintegrate. China might have started a transition to democracy in 1989, but it wasn’t on the verge of breaking up. If the Communist Party of China (CPC) had decided to start loosening the reins after Tiananmen Square, its leaders would have made sure that they—and the Party—were well provided for the future.

Like Taiwan, China could have started the transition to democracy within the framework of its existing political institutions. The first baby steps to democracy would likely have involved China’s eight officially recognized non-Communist “democratic” parties. China's so-called democratic parties have no real power or influence, but they do have several hundred thousand members who might have formed the nuclei for early experiments with democracy.

Taken together, these eight minor parties currently hold 23 percent of the seats in the National People's Congress (NPC) and 31 percent of the seats in its standing committee. In reality, these seats are held at the pleasure of the Communist Party, and the NPC is not a functioning legislature. But the institutional structures were always there for reformers to use, if reformers had ever been able to gain the upper hand.

Had Tiananmen Square turned out differently, then a reformist Communist Party might have allowed limited democratic competition in the 1990s, and might have given the NPC an ever-increasing say in actual governance. Like the KMT in Taiwan and the PAP in Singapore, the CPC and its cadres would have squirreled away enough wealth to ensure that they could successfully fight and win democratic elections for decades into the future. That may not be a stellar model for fair elections, but it is a practical one that would have kept the peace.

In a country as large as China, ambitious politicians with regional power bases would likely have split off from the CPC to try their luck in opposition. And that would have consolidated the transition to democracy, as multiple new parties arose that each had access to some of the CPC’s old power and wealth. The CPC might have retained a backstop, perhaps reserving the office of president for itself, but over the course of thirty years China might very well have made the transition from one-party state to well-governed democracy.

Democratic China and the United States

A democratic China would be a better China, but it wouldn't necessarily be a friendlier one. Today’s Communist Party elite has a strong interest in keeping China on good terms with the Western world, and most importantly with the United States. Their fortunes depend on economic stability, their children attend American universities, and many of them have emergency exit plans that involve at least one person in the family holding an American passport.

If China were a robust and competitive democracy, then politicians would face much more pressure to demonstrate their nationalist bona fides. Imagine the pandemonium that would break out if American politicians were found to have secretly acquired Chinese citizenship for their children or to have stashed money in Chinese bank accounts, and you get the idea. The leaders of a democratic China would go to much greater lengths to publicly distance themselves from the United States than do today’s unaccountable Communist cadres.

And a democratic China would certainly be expanding and modernizing its military, just as Communist China is. The United States, a democratic country with global responsibilities and ambitions, spends more than 3 percent of GDP on defense. China officially spends less than 2 percent. Even allowing for grey and black budgets, it doesn't come near American levels. Yet a democratic China would have the same kinds of global ambitions as the United States, and would be much more likely to be trusted with global responsibilities than is China's current government.

If China had gone democratic after Tiananmen, then it would now be a more responsible actor on the world stage. That would be a good thing for China, and probably for the world. But it might not be a good thing for the United States, since a more responsible China would be a much more attractive partner to the rest of the world. As things stand, China is a powerful adversary, but a deeply unappealing partner. It has many interests, but no real friends. Henry Kissinger’s famous dictum notwithstanding, America has friends. A democratic China would, too.

So if China’s current leadership is reading this analysis, and if they’re looking for a better path toward global leadership, then here’s something they might consider: When it comes to democracy, it’s never too late to change.