Could the Arab Spring Create a New Balance of Power in the Middle East? 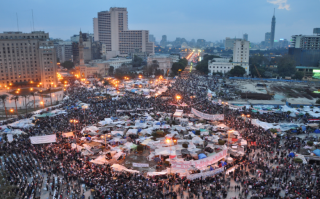 This summer will mark the centenary of the outbreak of the First World War. The assassination of Archduke Franz Ferdinand in Sarajevo in 1914 would herald total war to Europe, destroy empires and political systems, and usher a new order for the continent as well as the Middle East.

International-relations history features only a few watershed moments when a new international order emerges, usually built upon the ashes of human suffering and devastation. When emperors, kings, presidents and religious leaders renegotiated international order, war always preceded. In his influential book After Victory, John Ikenberry analyzes these very moments in history. The “settlements” of 1648, 1713, 1815, 1919 and 1945 offered critical junctures in which major-power conflict had sufficiently destroyed the existing order to permit the reorganization and rebuilding of international order. Ikenberry argues that during post war junctures, victorious powers may either use coercion to dominate the system, withdraw, leaving the intermediate powers to fend for themselves, or pursue a systemic transformation in an attempt to lock its post-conflict advantage for the foreseeable future. In 1919, the United States abandoned the international system, leaving an inherently flawed League of Nations that, without the lead power, was unable to prevent the rise of fascism (what we might now call ‘rogue states’) in Europe and Asia. In contrast, the 1945 settlement witnessed the transformation of the international system through the creation of a set of organizations that added a constitution-like quality. Whilst the United States and other victorious powers locked in their post-war advantage (through a Permanent Seat in the UNSC), the UN Charter became the universal organizing principle for international relations. Binding institutions and international law acted as restraint on concentrated power. Post-1945 international relations witnessed a stable political structure in which states’ returns to power were low while returns to cooperation through international institutions increased.

Since the end of the Ottoman Empire, regional order in the Middle East has been a mixture of hegemonic stability (extended deterrence by the United States) and balance of power between regional states, oscillating between different coalitions and outside powers.

It does not take a Frank Underwood to see that the cards in the Middle East have been continually reshuffled since 2011. The fall out of the Arab Spring has brought immense human suffering to the Middle East. The violent revolution in Libya has yet to consolidate itself into a new constitutional democracy. The horrors of total societal destruction and warfare in Syria remind us of the fields of Flanders and that although technology and warfare have evolved over the past hundred years, tragically, the Hobbesian state of human nature remains. And then there are the crushed dreams of democracy, dignity and human rights in Egypt, Bahrain and Saudi Arabia. There, the ‘deep state’ remains strong and resists political change.

However, these conflicts represent a series of systemic shocks to the regional order. They provide an opportunity for peace and stability to rise from the ashes. Without trivializing the trauma of combatants and civilians, perhaps the centennial of the first total war could be the beginning of a new regional order for the Middle East. What it needs is vision and political will—two qualities rarely found among leaders.

In fact, statesmen are rarely revolutionaries. It is often preferable to preserve the status quo rather than change it. International-relations history tells us that it is even difficult for the hegemon to impose its will on other members of the international community and bring about radical change. The Foreign Policy Analysis literature, therefore, tends to characterize statesmen as canoeists who prefer to go with the flow rather than paddle against the current. More often than not, the concept of “muddling through” is used to describe the entire foreign-policy decision-making process of great powers. Recently declassified CIA documents on the Clinton administration’s foreign policy towards the Bosnian conflict reveal the struggle between the “Never Again” and “Limited War” schools within the administration. As a February 1995 NSC Former Yugoslavia Bosnia Review reveals:

“- On the one hand, our own principles, as well as public and Congressional pressures, make it difficult to disengage and effectively abandon the Bosnians.

- On the other hand, we do not presently have the means to attain the political goal we have set—negotiated settlements that deprive the Serbs of some of their ill-gotten gains—and we have not been prepared to commit those means. Moreover, there is limited public support in the U.S. or in Europe for doing so.”

These domestic political constraints and opposition from allies (most of which had committed UN peacekeepers) made the Clinton administration unwilling to effectively intervene in the Bosnian conflict and pursued, what the DCI Interagency Balkan Force itself referred as a policy of “muddling through”. The NSC’s so-called “Endgame Strategy”—a military aerial offensive by NATO coupled with U.S. mediation between warring parties—only emerged after the horrors of Srebrenica and was more informed by the need to restore NATO and Western credibility rather than by humanitarian concerns.

And today, casualties in Syria rival the horrific losses in the entire conflict in Bosnia. So, standing on the sidelines of history comes at a cost for everyone. But tarnished legacies of presidents, prime ministers and chancellors seem far more benign than the summary executions of civilians and the torture of children. If human-security considerations rank low in Europe and the United States, perhaps the prospect of bringing about a new, stable order in the Middle East might incentivize intervention.

In order for a Middle Eastern security architecture to emerge, a critical mass of Middle Eastern states must develop stable and mutually reinforcing ties to permit long-term interests to coalesce. There have been systemic shocks before the Arab Spring: the Arab-Israeli Wars of 1948, 1967 and 1973; the Iran-Iraq war between 1980-1988; Desert Storm in 1991 following Iraq’s invasion of Kuwait; the 2003 Iraq war; the 2006 Lebanon war; and the Gaza-Israel conflicts between 2006 and 2012. However, each of these critical junctures also saw significant post-conflict intrusion from external powers (most frequently, the United States) in which extraregional relations have fueled regional discord enough to preclude the emergence of regional security architectures. For example, recent efforts to curb Iranian nuclear enthusiasm through multilateral diplomacy remain underwritten by U.S. extended deterrence and containment.

The political transformations and new foreign-policy alignments emerging in the ashes of the Arab Spring create a unique window of opportunity for regional realignment. The United States should be wary of the one-size-fits-all approach it has historically applied to all Middle Eastern states not named Israel, Egypt and Saudi Arabia, and consider articulating a clear foreign-policy doctrine governing the United States’ role in Middle Eastern security. After all, these doctrines have a tendency to hold U.S. presidents accountable, and doing so would finally allay the question of whether or not Obama does indeed have a Middle East policy. At this juncture, it would be most expedient for him to have one. America should neither dominate nor abandon the region, but be a proactive participant in establishing a stable concert of states.

Syria provides a focal point around which a regional settlement might be established, especially in the context of the U.S.-Iranian détente and Russia’s isolation over its aggressive actions in Ukraine. Assad cannot win the war in Syria, although it seems that neither can the rebels. Yet, this mutually hurting stalemate has not lead to an end of the civil war due to outside patrons’ participation and the high threshold for pain shared amongst the rebel factions and the Syrian regime. In such a situation, peace will not emerge through mutual exhaustion or learning (to use game-theory language), but will instead require some form of outside intervention. Conflicting sides may continue to inflict more harm on their counterparts and swap territories. But this is merely not losing the war, which is not at all the same as winning.

Peace in Syria must go through Tehran, Moscow and Riyadh. Between these three patrons, Russia seems to have the least to lose in abandoning its Syrian client. Eastern Europe and Crimea are of vital strategic importance for Russia, whereas its distant besieged ally in Damascus offers diminishing returns in exchange for Putin’s political and military support. In the long term, providing good offices for a peace agreement offers far more benefits to Russia’s regional and global ambitions than does continuing to prop up the Assad regime.

Russia's Deputy Foreign Minister Sergei Ryabkov’s recent threat that his government may retaliate against Western isolation of Russia over Crimea by “raising the stakes” in the nuclear talks with Iran are unlikely to materialize. If anything, Iran’s clout has risen as a result of the Ukraine crisis. Following a meeting with German business leaders in Berlin in March, Iranian Trade Minister Mohammad Reza Nematzadeh was quick to remind Europe that Iran was open for business stating that "Iran should be considered a reliable partner for natural gas supplies to Europe,” claiming that the government was looking into a pipeline to transport gas from southern Iran to Turkey, from which it could supply the EU. Not only does the Crimea crisis refocus Russian attention from Syria to its immediate neighborhood, reducing one external source of regional instability from the Middle East, but the widening rift between Russia and Western European countries provides an opportunity for Iran to emerge as an important and reliable trading partner to the West.