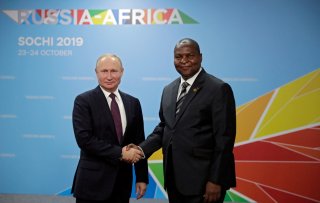 The Central African Republic (CAR) is gearing up for presidential elections on December 27. In the capital, Bangui, posters and banners with President Faustin-Archange Touadéra’s image have been up since August, though nearly ten other candidates have now filed with the National Election Authority. The United Nations (UN) and international observers are calling for armed groups to avoid violence, essential for a “durable peace.” Meanwhile, ordinary Central Africans are justifiably cynical—much has been promised before—and low voter turn-out is expected.

For Touadéra, though, the stakes are still high. His ex-boss, former President François Bozizé has returned from exile. Many expect Touadéra to win a second term; five of the fourteen rebel groups that signed the February 2019 peace accord, and one outside the agreement are backing the current president. Yet a major armed group, Le Front Populaire pour la renaissance de Centrafrique, has thrown its weight behind Bozizé. It is far from certain that elections will run smoothly; rumors of a delay are already making the rounds, voter registration has been slow due to COVID-19, and refugees outside the country will not be allowed to vote.

But if you are reading this article, you’re probably far more interested in our headline, “Russia’s Presence in the Central African Republic.” And that’s a problem. Recent media coverage on “Russian in CAR” taps into preexisting, essentializing Cold War discourse. These narratives deny agency to CAR’s citizens and fail to consider the reasons why Central Africans could support Russia’s presence in their country.

Many Central Africans—both in and outside of government—see Moscow’s hands-on support in the fight against armed groups as a last, but necessary option. Opinions regarding this military assistance and training vary, of course. But these differences are grounded in the logic of Central African politics, not great power competition. Russia’s influence in CAR is the result of others’ disinterest and neglect, not a return of the Soviet Union to Africa. Simple engagement from the U.S. and Europe—increasing funding, more meaningful diplomatic engagement, and equipping UN peacekeeping programs with what they need—would have an immediate, positive impact.

Politics in CAR, like everywhere, are incredibly complex. The stalemate “peace” in the country, and armed groups’ support for elections, rely on the desire to perpetuate the status-quo war economy; no armed group wants to relinquish territory and associated revenue. Decades of international interventions have fueled intercommunal conflict between herder and farmer communities, Christians and Muslims, and economic classes.

This came to a head in 2013, when a Muslim-majority rebel alliance, Séléka, led a coup against the Christian-dominated government. To defend the government’s control, predominantly Christian anti-Balaka self-defense groups took up arms. What appeared to many at first as a religious conflict, however, was actually a struggle for political and economic power. Not all Séléka were Muslim, and anti-Balaka groups included all religions: Christians, animists, and Muslims. Since the end of the civil war, the religious make-up of these groups has changed dramatically.

The state collapsed until reconciliation efforts brought the resulting civil war to an end in 2014. Elections were held the following year, but since then government forces have been largely unable to recapture territory from armed groups—who still control most of the country, and its mineral wealth—outside the capital. For Central Africans who believed the 2015 elections would bring an end to violence and the return of state authority, there is tremendous disappointment.

But the civil war and humanitarian crisis in CAR largely stayed off the international community’s radar until the arrival of a Russian private military contractor, the Wagner Group.

In August 2019, CNN published a report titled “Putin’s Private Army,” detailing Wagner’s entry into CAR. Yevgeny Prigozhin, or as Western media never fails to note, “Putin’s Chef,” provides “the mercenaries and funding to deepen Russia’s presence and in return wins access to unexploited riches.” Russia, according to CNN, “is tightening its grip on Africa.” Reports on Russia’s “growing influence” in Africa quickly followed. Only one thing was missing from the narrative: Central Africans’ opinions.

Most Central Africans were thrilled when Moscow began its military support. Sosthene—a local driver and blogger in Bangui—reflects a common opinion: “I like that the Russians came with respect for us. They bring gifts and military equipment, and they train our FACA [the Central African Armed Forces]. Central Africans are not against Russia, they’ve done nothing wrong.”

Local views on “Russia in CAR” are deeply intertwined with intense frustration about the continued prevalence of armed groups in the country. Gervais Lakosso, an artist and civil society activist, puts it plainly: “the biggest obstacle to development right now is security. There is no freedom of movement, and it’s the armed groups that are to blame.” Sosthene adds, “in the regions that [armed groups] control, the government cannot help the people. It would be great if we could develop agriculture, but to work the land, these regions need to be calm and peaceful.”

The presence of armed groups throughout the country and a weak national army—the FACA—has become not just a question of development, but dignity. Many Central Africans, but certainly not all (given accusations of human rights abuses by members of FACA during the civil war), want the government and its military to defeat these armed groups.

Russia’s military support and training for the FACA is seen as a chance to re-take the country and develop the state. Gervais notes that at first “the Russian presence was well-received by all. Ordinary citizens saw in it a new chance for CAR to be done with these armed groups and instability.”

Russia’s operations in CAR do not occur in a vacuum; they are one of many foreign actors intervening in the country. Perceptions of Russia often rely on perceptions of the UN Peacekeeping Mission in CAR—the United Nations Multidimensional Integrated Stabilization Mission in the Central African Republic (MINUSCA)—and France, the old and ever-present colonial power.

MINUSCA is, according to Fridolin Ngoulou, a local journalist with Oubangui Media, “not a credible force. They don’t prevent armed groups, and they don’t protect or defend the people.” While Central Africans were hopeful when MINUSCA arrived, and now appreciate their role in ending the worst violence, Maka Gbossokotto—a journalist in Bangui—still admits that “hope turned to despair.”

Opinions over MINUSCA differ, but those regarding France do not. “We don’t like France,” says Sosthene, “they were colonizers before, and many believe that they still don’t treat us with respect. The French believe that this country still belongs to them.”

This should come as no surprise. Yale professor and anthropologist, Louisa Lombard writes: “French colonization was alternately brutal and neglectful.” According to Stephen Smith, a professor at Duke University, Paris drew inspiration from King Leopold’s Congo to “privatize” the territory.

It is safe to say that Central Africans inherited a failed state at independence. And since then France participated in numerous military interventions and coups. Paris both co-financed Colonel Jean-Bédel Bokassa’s notorious coronation as “Emperor” in 1976, then overthrew him in 1979.

Central Africans judge Russia in relation to France. This goes both ways, however; if Russia is unable to bring tangible benefits to Central Africans, it risks becoming just like “the others.”

For Fridolin, though, there is still a difference between Moscow and Paris. Touadéra, when looking to rebuild FACA, “went to France for help, and they didn’t respond. Putin responded and agreed to support.” The fact that Bangui pays the Wagner Group with mineral concessions is “no problem at all. They get these concessions officially and are therefore paying the state. The bandits that operate the mines [outside government control], they are stealing from the state, and the people don’t profit.”

Others are wary of Russia’s involvement in mining. “They are collaborating with armed groups for diamonds,” says Gervais, “and people don’t approve.” “Now people think Russia is no different than France,” he adds.

Cynicism vis-à-vis Russia is growing. Igor Acko, a political analyst in Bouar, believes Russia’s presence in CAR “has been exaggerated, and highly publicized by the West.” “Russia,” according to Igor, “puts on a big show, but they are doing small things compared to the EU, France, and the U.S.” A recent parade in Bangui is a good example.

On October 15, President Touadéra and the Minister of Defense Marie-Noelle Koyara received Russia’s newest gift to the Central African Republic: ten Russian BRDM-2 armored vehicles. A military parade through Bangui ensued, followed by fireworks. Seven tanks then moved on to the village of Berongo, where Wagner is based.

Few were impressed. “A serious government should never celebrate the acquisition of old tanks, three of which broke down during the parade,” said Gervais. “People showed up because there was free stuff” noted Igor.

As Maka explained, the parade allowed: “a number of journalists close to the ruling party […] to make it a propaganda event for both the president and Russia. Other actors (the U.S., EU, France, China) have also given vehicles and equipment. But they have never benefited from such an audience!”