The Dangers of Creating a New Arab Alliance 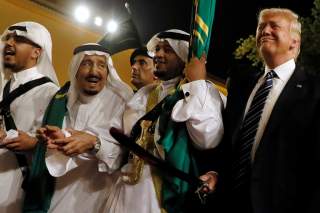 How to explain the Trump administration’s fixation with Iran? The Islamic Republic is an economic wreck and in political disarray, and lacks an effective conventional military. It obviously cannot seriously threaten America.

Moreover, Tehran’s capabilities are dramatically overshadowed by Israel’s nuclear arsenal, Saudi Arabia’s lavishly appointed military, and the United Arab Emirates’ brutal war-making. The obvious response to Iran’s threats, which have been far exceeded by Riyadh’s reckless aggressiveness, is regional cooperation—and for Tehran’s neighbors to better treat their own oppressed populations, so the latter do not find Iran’s Islamist message appealing.

Yet President Donald Trump, who doesn’t like the North Atlantic Treaty Organization, through which the Europeans have become embarrassingly dependent on America, wants to create an Arab NATO, provisionally named the Middle East Strategic Alliance. The organization’s leading member would be Saudi Arabia, another nation which candidate Trump criticized for taking advantage of the United States.

Secretary of State Mike Pompeo used the latest UN General Assembly meeting to host prospective members while Deputy Assistant Secretary of State for Arabian Gulf Affairs Tim Lenderking criss-crossed the Gulf promoting the idea. If all goes well, it will be introduced at a summit hosted by the United States in January.

At least the original NATO served a useful purpose. Western European countries had been wrecked by World War II and the Soviet Union turned Central and Eastern European states into dismal satellites. Soviet domination of Eurasia, though not sufficient to threaten American independence, would have presented the U.S. with a dangerous security environment for years if not decades.

The alliance’s chief shortcoming was allowing Europeans to treat America’s military commitment as welfare. NATO’s European members are capable of confronting Russia or any other presumed adversary. Yet after recovering economically, they continued to rely on Uncle Sam, dismissing ever more embarrassing pleas from Washington that they do more. They knew American officials would defend the continent, no matter what.

Today even countries claiming to be vitally threatened by Russia—Poland and the Baltic States—spend only about two percent of gross domestic product on their militaries. They expect the United States to swoop in at the last minute and save them if the worst happens. NATO is an alliance primarily in name rather than action. President Trump has repeatedly made this point, but his own officials have done their best to undermine his efforts.

Alas, an Arab NATO, whether called MESA or something else, would multiply the original NATO’s many infirmities. First, by its own terms the proposed organization would be bound to target its own members. A spokesman for the National Security Council declared that the alliance “will serve as a bulwark against Iranian aggression, terrorism, extremism, and will bring stability to the Middle East.”

However, virtually all the Gulf States have facilitated terrorist funding over the years. Saudi Arabia provided most of the 9/11 terrorists and spent some $100 billion in recent decades subsidizing intolerant Wahhabist thought, which acts as a precursor to terrorism. Riyadh and Abu Dhabi have actively destabilized Yemen, Libya, Syria and Lebanon. Contrary to Washington’s position, Kuwait, Oman and Qatar all maintain civil relations with Tehran. Taken literally, the administration would have MESA’s members engage in a war of all against all.

Second, there is little agreement on anything among the nations Washington expects to join the new group. The Kingdom of Saudi Arabia and UAE want to rule over their neighbors, determined to impose their agenda through war, if necessary. They launched a murderous invasion on Yemen, pressed their neighbors to isolate Doha, and even planned to invade Qatar, but were blocked by Turkish military intervention and U.S. opposition.

Kuwait and Oman traditionally have acted as mediators between their larger neighbors. Facing grievous domestic economic and political challenges, Jordan looks inward. In Bahrain the Sunni monarchy is focused on suppressing the Shia majority. Egypt is a common hireling, because of poverty beholden to Riyadh and Abu Dhabi for the billions they have spent propping up the el-Sisi dictatorship.

Qatar’s independent course angered rigidly authoritarian Saudi Arabia and the UAE, especially since it allowed media coverage of their crimes and the sanctuary for their political opponents. Even Lenderking admitted the obvious, that the intra-Gulf dispute poses a long-term impediment to the idea of MESA.

Nor do the presumed alliance members agree on the supposed threat of Iran, around which the Trump administration intends to center MESA. Lenderking cited Tehran as the “number one threat” to be confronted. However, though Riyadh and Abu Dhabi desire U.S. support against Iran, their priority is regional dominance rather than national defense. Bahrain’s thuggish monarchy is angry because Tehran has backed the Shia majority against the repressive Khalifa ruling family, not because Iran is threatening to attack. As noted earlier, Kuwait, Oman, and Qatar treat Tehran with balance; Qatar shares a natural gas field. Egypt does not fear Iran, but does what it is paid to do. Jordan is far more worried about its domestic problems than Tehran.

Unfortunately, the only way a coalition of these states will “work” is if the United States browbeats the other members into accepting Saudi control, which would threaten to drag them into multiple conflicts orchestrated by Riyadh for Riyadh’s benefit. But most vulnerable to manipulation would be Washington, which would be expected to backstop the Saudis irrespective of their actions, such as the criminal destruction of Yemen.

In fact, turning policy over to the Saudi royals is an open invitation to region-wide war, incompetence, and corruption. Saudi Arabia and the UAE would use MESA to advance their own objectives and not those of America or other fellow members. With Bahrain and Egypt already on their payrolls, the Saudis and Emiratis would attempt to use the new U.S.-backed alliance to cow their more moderate Gulf neighbors.

Third, the Persian Gulf is not vital to America. It never really was, but at least during the Cold War the Soviet Union conceivably could have interfered with the industrial world’s energy consumption. Today sources of energy supplies have multiplied around the world, with America emerging as the world’s largest energy producer. No one imagines Moscow plotting, say, a thrust to the Gulf through Afghanistan.

Rather, the region’s greatest problems are internal, often exacerbated or even created by the U.S. government. Indeed, Washington is the region’s most destabilizing force: blowing up both Iraq and Libya, attempting to overthrow the Syrian government, pushing barely disguised regime change in Iran, and backing the Saudi regime’s reckless military intervention in Yemen and elsewhere. No other government has wreaked nearly as much havoc throughout the region.

Some Americans care much more about Israel than they do about U.S. energy supplies or regional stability. However, the radical Likud government also is playing the United States. Israel is a nuclear-armed regional superpower, capable of defending itself from all comers. Like its neighbors, the principal existential threat facing Israel is internal: if it seeks to forcibly maintain a growing Arab population as a subject labor force, then Israel may find it impossible to be both democratic and Jewish.

Fourth, Iran is in no position to dominate the Mideast. President Trump recently argued that “When I came into here, it was a question of when would [the Iranians] take over the Middle East?” But Iran faces severe domestic challenges. The Islamist elite lacks legitimacy, especially among a younger population which looks West. The economy is isolated and weak. The military as never recovered from the revolution which overthrew the Shah.

Iran’s missile program, oft criticized by U.S. officials who control the world’s most powerful military, is a deterrent borne of weakness, ensuring deterrence as city-busting weapons targeting desert city-states. Saudi Arabia is the region’s most threatening aggressor, having invaded its poor neighbor, Yemen, used military forces to maintain Bahrain’s brutal Sunni monarchy over the majority Shia population, subsidized Egypt’s murderous al-Sisi dictatorship, underwritten radical jihadists in Syria, and kidnapped Lebanon’s prime minister. Abu Dhabi, with a more effective military, has joined in many of these destructive interventions. Tehran is a piker in comparison.

Iran’s supposed empire of Iraq, Lebanon, Syria and Yemen is a fantasy. The Bush administration empowered the Islamist regime by ousting Iraq’s Saddam Hussein, but even so Baghdad is no puppet. Tehran enjoys influence in desperately dysfunctional Lebanon through Hezbollah, but at most that offers Iran a possible deterrent weapon against Israel. Tehran has never dominated Yemen and is assisting Houthi rebels mostly to bleed the aggressors, Saudi Arabia and the UAE. In Syria Iran has worked hard to preserve a long-standing ally under siege by Riyadh and others. These foreign-policy initiatives are largely defensive and, even if successful, have been economically ruinous.

The Saudi Crown Prince has admitted that “Iran is not a rival to Saudi Arabia. Its army is not among the top five armies in the Muslim world. The Saudi economy is larger than the Iranian economy. Iran is far from being equal to Saudi Arabia.” So why does Riyadh, which candidate Donald Trump denounced for its military dependence on Washington, need U.S. defense subsidies formalized by treaty?