A Defense Treaty With Israel Would Be a Huge Mistake 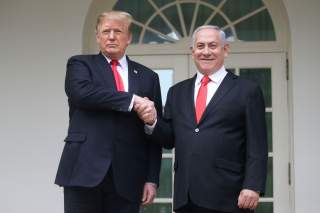 Israel has been a key ally of the United States for more than sixty years. While President Harry S. Truman recognized the Jewish state against the advice and furious lobbying of both the State Department and the U.S. intelligence community, President Dwight D. Eisenhower embraced a “realist” outlook and an unabashed pro-Arab policy. After all, the U.S. economy was increasingly thirsty for oil, and that was a resource which Arab states had plenty but Israel, at the time, had none. By Cold War calculations, a U.S.-Arab alliance also made sense: There were more than twenty Arab states but only one Jewish one. This realist calculation was the major reason why Eisenhower sided with Egypt against not only Israel but also Great Britain and France during the 1956 Suez crisis.

Why then, have generations of U.S. presidents supported Israel so absolutely? The simple reason was that Israel made a better ally than even America’s closest Arab ally. Israel consistently votes with the United States at the UN more than 90 percent of the time, more than any other country; most Arab states don’t crack ten percent threshold and none in the most recent year counted topped 30 percent. Israeli military prowess was also the gift that kept giving, often gaining access to and providing to the Pentagon and the Central Intelligence Agency intelligence and Soviet military equipment which they had no other way to access.

The de facto U.S.-Israel alliance also made the Middle East safer for the United States. President Ronald Reagan joined many of his European counterparts and the United Nations in condemning Israel’s 1981 strike on the Osirak nuclear reactor. In hindsight, Israeli Prime Minister Menachem Begin’s decision to launch Operation Opera saved either millions of lives, Kuwait’s independence, or both. Israel’s unilateral 2007 airstrike on Syria’s undeclared nuclear site—a likely plutonium processing plant—denied nuclear weapons to a regime which the world would soon learn did not hesitate to use chemical weapons against its civilian population.

It is unlikely, however, Israel could have launched either attack—and countless other operations about which the American public has never heard—had it had a mutual defense treaty with the United States. Nor is such a treaty necessary for Israel’s defense. Put aside the fact that Israel would never trust an outside security guarantee for its existence; the world is too venal (just ask the Uighurs). Israel has also survived for decades absent it when countries with which it now has peace like Egypt and Jordan, or de facto peace like Saudi Arabia and the other Arab Gulf states, were hellbent on its destruction. It survived both the Six-day War and the Yom Kippur War. True, during the latter conflict, the United States airlifted emergency supplies, but that simply highlights the fact that Israel’s importance to the United States makes any defense treaty unnecessary.

Why not formalize the informal, however? The answer is simple: A formal defense treaty between Jerusalem and Washington would tie Israel’s hands. Israel could never act—even covertly—without giving the United States veto power over Israel’s operations. Even if U.S. authorities approved any operation—a process which could cost valuable hours or days—the notoriously leaky culture of the Pentagon and U.S. intelligence community makes trust in U.S. discretion increasingly impossible. (To be fair, Israeli diplomats, generals, and retired Mossad agents are equally incapable of keeping a secret when their own political ambition is at stake. Israel’s ill-conceived dealings with China raise questions which also cannot be swept under the diplomatic rug).

While Iran and its proxies pose the greatest immediate challenge to both Israeli and American interests in the Middle East, their strategy is one of attrition rather than conquest. Every Israeli interceptor fired is several orders of magnitude more expensive than Iranian, Hezbollah, or Hamas rockets. Iran is using the Houthis not only to control a strategic chokepoint but also to bankrupt Saudi Arabia. The experience of Afghanistan and Iraq should highlight why the United States should not commit itself to a conflict which will be fought the same way.

Many U.S. supporters of Israel embrace the notion of a U.S.-Israel defense pact for its symbolic value. That too is likely why Israeli Prime Minister Benjamin Netanyahu now discusses it against the backdrop of a political campaign. But whenever U.S. and Israeli militaries become tools of a political game, strategic imperatives would suffer. For this reason alone, the Congress, the Pentagon, and the White House should shut down discussion of any U.S.-Israel defense pact immediately.