The Deflation of Donald Trump 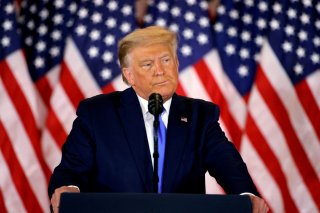 While the rest of the nation agonizes over runaway inflation, Donald Trump’s big problem is deflation. His political and economic balloon may not have burst, but it’s leaking, and leaking fast.

Merriam Webster defines deflation as “the state of being deflated,” and “a contraction in the volume of available money or credit.” The latter definition applies to Trump’s troubled business affairs, heavily in debt and beset by malicious, politically-driven investigations by partisan foes. The former definition applies to his political standing, at least as much due to his own excesses as to those of his enemies. It’s as if someone stuck a needle into one of those large, lumbering “Baby Trump” floats protesters used to launch near Trump rallies. Slowly but surely, the gigantic, hovering image of Donald Trump is shrinking, shriveling, and sinking earthward.

Some of us saw it coming from afar, but not the mainstream media.

For more than a year they have devoted their efforts to echoing the Biden administration line and inflating rather than deflating Trump as the source of all evil, the unquestioned master of both the conservative movement and the Republican Party. This just happened to be a perfect fit with Joe Biden and Nancy Pelosi’s strategy of deflecting attention from their own unpopular, leftist agenda and policy failures by invoking the threat of Bogeyman Trump. If they could convince enough independent and center-right Americans who had not voted for Trump in 2020 that being against Biden and Pelosi now meant being for Donald Trump, they might be able to save their own political skins in the 2022 midterms and beyond.

It’s not working. Republican numbers are going up even as support for the Democratic Party, Biden, and, yes, Trump is going down.

A Trafalgar Group poll released February 15 found that nearly 55 percent of voters preferred Republican candidates to less than 42 percent favoring Democratic candidates as the 2022 midterm elections loom on the horizon.

In other recent polling, Curl adds, Biden’s approval rating in forty-six states is in the lower 40 percentiles, and “in the 30s in several swing states, including Florida, Arizona and Georgia.” At the same time, he points out, Biden is “just at 23 percent [approval] with independents nationwide, a voting bloc that helped put him in the White House.” And here’s the really interesting part: None of this dive in Democratic popularity appears to be driven by a surge in Trump support. In fact, Trump’s numbers are plummeting in tandem with Biden and the Democrats, even as Republican numbers soar. This is something I predicted in this space last October in a piece entitled, appropriately enough, “Tanking Together: Why Biden and Trump are Both Underwater.”

In a CBS poll released February 15, 65 percent of U.S. adults don’t want Trump to run for president again in 2024. Particularly significant is the fact that close to one-third (29 percent) of those voting for Trump in 2020 don’t want to see him run again in 2024.

Even some of those who want to see Trump run again may be more interested in laughs than in good governance. 25 percent of them said a Trump run “would be entertaining.”

Now that the train has already left the station, even the Washington Post has begun to reluctantly acknowledge that, rather than pulling the strings in the GOP and the conservative movement, Donald Trump may be morphing into the Incredible Shrinking Man. As reported by the Post’s Michael Scherer and Josh Dawsey, “Trump’s once-unchallenged hold on the party and rank-and-file supporters is waning, even if by degrees.” They add that polls also show “some weakening among Trump’s electoral coalition, even as Republicans appear poised for huge gains in the midterm elections.”

Congratulations for finally facing reality, guys. But you’re a little late. As I wrote here more than four months ago, “The electorate as a whole seems to be turning against the Biden presidency (and the Schumer-Pelosi-led Congressional agenda). Simultaneously, the majority of Trump’s own base would rather not see him run again. Welcome to the Biden-Trump slump.

Aram Bakshian Jr., a contributing editor at the National Interest, served as an aide to Presidents Nixon, Ford, and Reagan and writes frequently on politics, history, and the humanities.