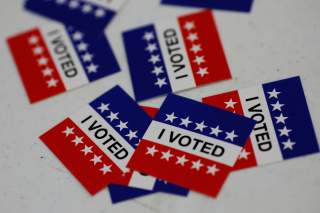 Democrats are counting on a “Blue Wave” in the fall 2018 elections to return them to the majority, at least in the House of Representatives, and to pave the way for retaking control of the Executive Branch in the 2020 presidential election. For many card-carrying members of the Democratic foreign policy establishment in Washington, this offers the opportunity not only to reverse the steps taken by the Trump administration to dismantle the U.S. commitments to international agreements, regional organizations and specific allies and partners, but to return to a foreign policy grounded in the tenets of liberal internationalism.

Yet trends within the Democratic Party itself could take the Washington-based establishment by surprise, just as the Republican national security community found itself out of sync with the broad base of GOP voters as demonstrated in the 2016 election. The muscular interventionism championed by almost all of the Republican party’s standard-bearers was rejected in favor of an “America First” message which resonated with primary and general election voters. Similarly, the rise and growing prominence of a more unabashedly progressive wing of the Democratic Party has similar implications, because the activists’ critique of the status quo does not end at the water’s edge. The Democratic foreign policy establishment may find it difficult to forge a stable marriage with a mobilized voter base and the candidates it is putting forward. If Alexandria Ocasio-Cortez represents the face of this movement, with Sen. Bernie Sanders acting as its godfather, and if candidates from this wing gain ascendancy, then the other half of the so-called “bipartisan foreign policy” consensus will be challenged in the same way as Trump’s movement has done for the GOP. After all, during the 2016 campaign, Senator Sanders, much like Trump, offered a critique of U.S. foreign policy that had resonance among primary voters.

As part of the U.S. global engagement project for the Carnegie Council for Ethics and International Affairs, I have been studying the impact of the “narrative collapse” among U.S. voters about the role and efficacy of U.S. foreign policy that I began to chart in these pages two years ago. The narrative among Republican voters has centered on the lack of return for U.S. involvement; that the United States has expended blood and treasure for allies and partners who have not “paid” the United States for this investment in their security and instead used U.S. support to enhance their own internal prosperity at the expense of Americans. It has been a more transactional view of how the United States should conduct itself in international affairs. It is compounded by a sense that the foreign policy establishment has wasted American lives and resources pursuing ill-conceived interventions that drain vitality without generating clear successes.

There is a parallel but distinct narrative emerging among progressives. If the Trump critique is a Jacksonian one (to the victors should go the spoils), the argument among the “Sanderites” starts from the premise that U.S. interventions around the world, for the most part, have been counterproductive from the perspective of advancing human rights. Washington, and certainly the U.S. military, is not the go-to instrument for advancing social justice.

If, among Trump voters, the interventions in Iraq, Libya and Afghanistan are viewed negatively as failures because of a perceived lack of victory, the parallel critique from the leftist side of the aisle is that these interventions did not succeed in making these countries freer or better governed—while also diverting resources that could be used to improve the lives of ordinary Americans.

This perspective is not isolationist from the perspective that Americans should not be concerned with what happens in other countries, but shares a skepticism about the efficacy of the U.S. national security establishment in advancing values. There is a “come home” America sentiment that less defense spending and involvement in military matters around the world could free up resources for domestic development and spending. The argument that we are spending money to build bases around the world while we are closing schools and clinics at home is one which Ocasio-Cortez and others have echoed. Instead, there appears to be more of a throwback to a venerable nineteenth-century tradition of individual Americans as “missionaries” working overseas—Americans, rather than the U.S. government, involved in trying to make the world a better place. This approach would place a greater emphasis on American “soft power” as opposed to hard security tools as a way to project influence.

The “Sanderites” view the current international system, especially in economic matters, as weighted towards the interests of large multinational corporation and financial interests at the expense of average citizens. The argument that the United States needs to maintain a large defense establishment to police the global commons and to keep open the arteries of global commerce is evaluated through this lens. The critique of neoliberal free trade was in fact a point of commonality between Trump and Sanders supporters in 2016, and Democratic foreign policy advisers who believe that every rising Democratic candidate for 2020 will enthusiastically re-endorse the Trans-Pacific Partnership and the Transatlantic Trade and Investment Partnership out of loyalty to the legacies of Bill Clinton and Barack Obama will find that this is not necessarily a winning message among Democratic primary voters. It certainly forced candidate Hillary Clinton to dial back her support for broad-based free trade agreements in the 2016 campaign, and this sentiment may resurface again in 2020. Protectionism still carries weight among a number of key labor constituencies—so this may be one area where assuming that taking an opposing tack to Trump is an automatic winning stance for Democrats could be risky.

Of course, much depends on which candidates win in 2018 and 2020, and, more importantly, what advisers and staff they select. Ocasio-Cortez, who has frankly admitted her lack of expertise on matters geopolitical, will, assuming her win is a foregone conclusion in November, have to select policy personnel for her Congressional office. If her, and other progressives end up being supplied with national security and foreign policy staff from the existing establishment, then we may see the tempering of these initial instincts to curtail U.S. activism in the international system in favor of accepting tutorials in the precepts of liberal internationalism. But we need to consider whether the Sanders movement will be the second of the “one-two” punch that Trump’s election and subsequent “disruption” of the U.S. role in the world delivered in 2016. If so, then the contours of U.S. foreign policy could be irrevocably changed.

Image: "I Voted" stickers are seen as voters head to the polls for election day in Princeton, New Jersey, November 7, 2017. REUTERS/Dominick Reuters