The Democrats’ Impeachment Rage Against Trump Will Backfire 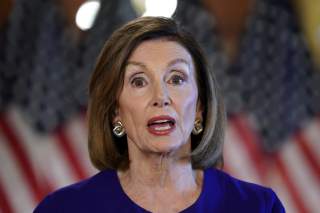 I’ve never seen a political party make as many unforced errors as the Democrats have in recent days. Seizing on a laughable complaint from the latest palace eunuch to try to take down the president of the United States, they’ve walked down a blind alley.

By now it is clear to most people that the president did nothing illegal or impeachable in his congratulatory call to Ukrainian president Volodymyr Zelensky after his election. Trump only noted obvious facts, such as the U.S. government is a big financial supporter of Ukraine and the United States wants to see corruption reduced. His concerns about alleged Biden family corruption involving Ukraine was not unethical. It was his duty to inquire about it. Zelensky took his comments and questions in stride, seemingly expecting each one.

If there was any corruption involved or if anyone might be disqualified from holding public office, then it would be former Vice President Joe Biden. Video footage exists of Biden bragging about getting the investigator of his son, Hunter Biden, fired by threatening to withhold U.S. assistance. Biden appears to have engaged in the type of corrupt activity that Democrats can only fantasize Trump undertook.

The idea that Trump should be impeached over his phone conversation with Zelensky is ludicrous. But if it is going to occur, then it will likely to occur in the House of Representatives under the influence of its current far-left composition. House Speaker Nancy Pelosi, with all of her vaunted political skill, has painted herself into a corner. If she backs down from the impeachment process now, then her radically progressive base and congressional colleagues will have the biggest meltdown since Trump was elected. If she proceeds, then she will tie up of the rest of this Congress with a futile impeachment effort that the public overwhelmingly opposes. Democrats would need to flip no fewer than twenty Republican senators to convict an impeached Trump and remove him from office. The safest bet is that they wouldn’t flip a single Republican, especially since voters will render their own verdict next year.

The Democrats control the House of Representatives in one of three branches of the federal government. They could have used this vantage to spotlight Democratic alternatives to Republican policies on healthcare, education, and foreign policy. They could have thought methodically about why they lost the lower middle class in the last presidential election, and what it would take to get those voters back, lest Republicans cement a new lock on the electoral college. They could have rediscovered the outlook that gave Democrats overwhelming control of Congress and state legislatures through most of the twentieth century: the belief that America should be prosperous, but that all Americans should share in that prosperity—and trust that voters would reward them for this view.

But they have done none of that. Instead they have raged against Donald Trump, and spotlighted their most radical members and ideas. Democrats lost control of the House of Representatives in 2010 in part because Republicans painted Pelosi as too liberal during her first tenure as Speaker. She now looks moderate in comparison to Democratic chairmen Jerry Nadler and Adam Schiff, or freshmen Alexandria Ocasio-Cortez and Ilhan Omar—all of whom the media is compelled to feature prominently every day.

Furthermore, this scandal, engineered by the Democrats and a yet-unnamed malcontent employee of America’s intelligence bureaucracy, which is as vast and swampy as it is ineffective at its mission, will serve mainly to discredit the Democrats’ best hope to defeat Trump with a relative moderate. Not only does Biden’s conduct with Ukraine call into question whether he used public office for personal gain, there will also be additional scrutiny applied to Hunter Biden’s unusual business dealings in China. As with Ukraine, Joe Biden has taken public positions on policy toward China that seem, in retrospect, to be designed to help his son at the expense of the United States.

As Karl Marx famously wrote, “history repeats itself, the first time as tragedy, the second time as farce.” The attempts by the palace eunuchs of the national bureaucracy, who have now tried twice to take down Trump on phony pretexts, appear to make Marx’s words ring true. First it was highly skilled and corrupt officials at the FBI who insinuated collusion between the Trump campaign and the Russian government. This time it is the Democrats who are playing along with Pelosi’s charade, fueled by self-indulgence and rage. It will cost them.