Democrats Rev It Up in Detroit 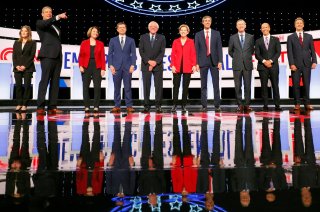 While some predicted that Warren and Sanders would use this opportunity to share differences between them, they instead turned back-to-back to battle the amorphous moderates at either end of the stage.

Warren said Democrats need to be the “party of big structural change,” while Sanders complimented Republicans who “are not afraid of big ideas.” In this regard, Sanders and Warren fought against Delaney, Hickenlooper, Ryan, and Bullock, who said they were employing an “an anti-private sector strategy” (in Delaney’s words). “I don’t understand why anybody goes to all the trouble of running for president of the United States just to talk about what we really can’t do and shouldn’t fight for,” Warren responded.

Marianne Williamson stole part of the spotlight with her warnings about “dark psychic forces” and her impassioned defenses of slavery reparations. Her rousing closing statement left her the most searched candidate at the end of the debates, according to Google Trends. The line between ironically or genuinely supporting the California spiritualist is starting to blur.

The progressive-moderate split continued into foreign policy, with candidates arguing over more or less diplomacy and military force.

The president of the United States is commander-in-chief of the U.S. military, the largest in the world, and the position carries much more power in foreign than domestic policy. The United States has over eight hundred military bases stationed in over seventy countries around the world. The military is engaged in more conflicts than a person can count on one hand. CNN relegated twelve minutes at the end of the debate to ask candidates about these crucial issues.

Moderator Jake Tapper asked Bernie Sanders how he was different from Donald Trump, since both men claimed to oppose permanent global war. “Trump is a pathological liar. I tell the truth,” he answered to applause. Sanders, reading the bill for the two-decade-long War on Terror, elucidated how a multilateral foreign policy would work under his administration. “What we need is a foreign policy that focuses on diplomacy, ending conflicts by people sitting at a table, not by killing each other. As president of the United States, I will go to the United Nations and not denigrate it, not attack the UN, but bring countries together in the Middle East and all over the world to come to terms with their differences and solve those problems peaceably,” he said.

Ryan and Klobuchar engaged in an exchange over when the president should conduct negotiations with U.S. adversaries. Ryan denigrated the negotiations President Donald Trump opened with North Korea’s Kim Jong-un, preferring instead to wait while Kim presented a finalized deal at his feet. “I don’t think presidents of the United States meet with dictators,” Ryan said, presumably including the leaders of Turkey, Saudi Arabia, Russia, China, Egypt, and large parts of the world who do not measure up to Western, democratic standards. Klobuchar disagreed with Tim Ryan’s isolationism, saying that the president has to be ready to negotiate with anyone at any time.

While Pete Buttigieg previously gave short shrift to foreign policy, when given the opportunity he presented a strong answer. “We will withdraw. We have to,” Buttigieg said about Afghanistan, promising to exit the country in his first year of office. Furthermore, he promised that all future Authorizations for the Use of Military Force have an automatic three-year sunset clause. This is a full-tilt away from President Trump’s State Department’s request for a permanent extension of the 2001 AUMF.

O’Rourke also promised to withdraw from Afghanistan, extending the promise to his first term. “We’ve satisfied the reasons for our involvement in Afghanistan in the first place, and it’s time to bring those service members back home from Afghanistan. But also, from Iraq, also from Yemen, and Somalia, and Libya, and Syria. There is no reason for us to be at war all over the world tonight. As president, I will end those wars, and we will not start new wars. We will not send more U.S. service members overseas to sacrifice their lives and to take the lives of others in our name,” O’Rourke said, which was the most broadly non-interventionist answer of the night.

“I look at it as a humanitarian issue,” countered Hickenlooper on Afghanistan. “If we completely pull our troops out of there, we’re going to see a humanitarian disaster that will startle and frighten every man, woman, and child in this country.” Hickenlooper said withdrawing would be turning our backs on the Afghan people, and that the United States needed to remain in place to ensure the rights of women. The upcoming presidential election in Afghanistan is scheduled for September.

Tapper asked Warren why the United States should “tie its hands” and forgo its ability to launch a preemptive nuclear strike. “Because it makes the world safer,” she answered. “The United States is not going to use nuclear weapons preemptively, and we need to say so to the entire world.” She also deplored the use of military forces without an exit strategy.

“I wouldn’t want to take that off the table,” Bullock said, leaving Warren visibly surprised. “I don’t want to turn around and say ‘Well, Detroit has to be gone before we ever use that,’” said Bullock. The real fireworks, though, will likely come at tonight’s second debate, where former Vice President Joe Biden will demonstrate if he’s recovered his mojo and stare down the progressives or not.