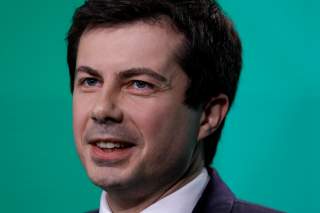 An impressive, intelligent “boy wonder” emerges from the Midwest. He checks out of his political post for a stint of military service and seeks to challenge an incumbent president with underwater approval ratings. Pete Buttigieg meet Harold Stassen. The thirty-seven-year-old mayor of South Bend, Indiana, has a lot in common with former Minnesota governor Harold Stassen, who at age forty-one in 1948 tried to unseat Harry Truman. But while Stassen was one of the postwar founders of U.S. internationalism, Mayor Pete’s foreign policy remains something of a blank canvas.

The most forthright foreign policy issue taken by Buttigieg, who formally announced his campaign for the 2020 Democratic presidential nomination on Sunday, is on Afghanistan. Commissioned as a naval intelligence officer in the Navy Reserve in 2009, in 2014 Buttigieg was deployed to Afghanistan for a seven-month tour. He often refers to Afghanistan as a “hauntingly beautiful country.” “In Afghanistan, I was assigned to a counterterrorism unit called the Afghanistan Threat Finance Cell. Working long hours, seven days a week, we went after the most dangerous terrorist groups by targeting the connection between narcotics and insurgent financing,” Buttigieg wrote in a 2014 op-ed when he returned. He and Congresswoman Tulsi Gabbard of Hawaii are the only veterans in the almost twenty-person Democratic field.

“This war is not over, whatever you may hear. But one day it will be, and the measure of what we achieved at such great cost will be taken by asking whether Americans and Afghans live better, freer lives because we served,” Buttigieg continued in the same South Bend Tribune article. The Indiana mayor currently supports a U.S. withdrawal from the Central Asian country. When fellow mayor Brent Taylor was killed in Afghanistan in November 2018, Buttigieg tweeted in part, “Even as many lose track of the fact that we’re still there, the war continues to take American and Afghan lives.”

As a worldly man who speaks seven languages and spent a year in the mid-2000s working with The Cohen Group, a firm providing strategic advice for overseas business sectors, it’s unlikely that Buttigieg hasn’t considered foreign affairs. But, as Code Pink co-founder Medea Benjamin observed, Buttigieg is one of several candidates who doesn’t “mention foreign or military policy on their campaign websites at all.” His public statements hardly pull back much of the veil. He has one tweet from December 2018 calling U.S. policy in Yemen “indefensible,” another vaguely praising the NATO troops he served alongside, and a single tweet criticizing President Trump for praising “the leadership of the dictator of North Korea” during negotiations. He does not appear to have taken a stance on Saudi Arabia, China, or the ongoing U.S. intervention in Venezuela. According to PBS, Buttigieg opposes U.S. withdrawal from Syria although there is no citation or quote.

One of the few foreign policy issues Buttigieg has chosen to speak about at length is the Israeli-Palestinian conflict. Disagreeing with Congresswoman Ilhan Omar’s (D-MN) comparison between Israel and Iran, Buttigieg said on The View:

I disagree with the comments comparing Israel to Iran. People like me [a homosexual] get strung up in Iran. So, the idea that what’s going on is equivalent is just wrong. Now what I will say is it's a complicated picture. I was in Israel in May of this year and not only is there a real problem with their long-term, how they’re going to balance being a democracy with being a Jewish state. But they’ve also got to figure out, and we’ve got to figure out with them as an ally, what the regional security picture is going to look like in the future. We were just a couple of miles from Gaza and the general who was briefing our delegation said what they were worried about most is Iran, beyond even what’s going on with the Palestinians. It has always been one of the most fiendishly complicated issues and simple answers will not serve us well at a time like this.

Buttigieg has previously said that the United States could learn a lesson about how Israel is able to balance its security. While supportive of Israel, Buttigieg has made it clear on multiple occasions that he disagrees with the politics of Prime Minister Benjamin Netanyahu’s right wing coalition. After Netanyahu’s pre-reelection campaign promise that he’d soon begin annexing parts of the occupied-West Bank, Buttigieg tweeted, “This provocation is harmful to Israeli, Palestinian, and American interests. Supporting Israel does not have to mean agreeing with Netanyahu‘s politics. I don’t. This calls for a president willing to counsel our ally against abandoning a two-state solution.”

Despite being considered a front-runner at certain moments, Harold Stassen came in third place for the 1948 Republican nomination. Will Mayor Pete Buttigieg be able to outperform him?