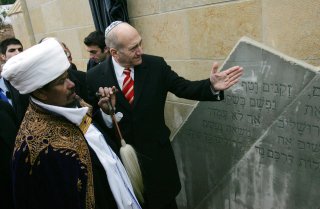 ON DECEMBER 11, 2019, just before he was to host the White House Hanukkah parties, President Donald Trump signed an executive order that called for “robust” enforcement of existing civil rights protections for Jews on university campuses. The order cited Title VI of the 1964 Civil Rights Act, which prohibits federal funding for discriminatory programs. The order stated that

The executive order marked the first time that Jewish students were classified as a class protected from discrimination. The executive order did not define what it meant by “Jews” and “Jewish.” Nevertheless, the order prompted a major debate within the Jewish community, spurred in part by an erroneous interpretation of the executive order that appeared in the New York Times, as to whether applying Title VI to Jews labelled them a “nation” or a “race” rather than a “religion.” Some Jewish leaders were concerned that such an interpretation might, as a possible consequence, expose the Jewish community to the hoary anti-Semitic charge of dual loyalty—in this case to Israel as well as the United States.

Indeed, within days of Trump having signed the order, an Israeli-American student named Jonathan Karten, acting through a group called The Lawfare Project, filed a complaint against Columbia University and requested an investigation by the Department of Education’s Civil Rights office. The complaint accused Columbia’s administration of deliberately ignoring a “hostile environment” against Jews on the university campus.

Karten’s lawsuit received wide coverage and prompted a new debate over the executive order in general and the place of Jews on Columbia’s campus in particular. A group called Palestine Legal, not surprisingly condemned the complaint. Jewish groups supported it.

There have been reports over the past several years that Jewish students, who constitute a significant proportion of Columbia’s student community, have been the subject of harassment by both fellow students and pro-Palestinian professors. Indeed, one Jewish group ranked Columbia’s campus environment as the most hostile to Jews among all major colleges and universities. That Lee Bollinger, Columbia’s president, unleashed a separate controversy when he invited Malaysia’s openly anti-Semitic president, Mahathir Mohamad, to speak at the university—after having issued a similar invitation to Iran’s then-president and Holocaust denier Mahmoud Ahmadinejad—did little to mitigate perceptions of Columbia’s attitude toward Jews.

ARE JEWS a “nation,” a “race,” or an ethnic group rather than a religion? Norman Lebrecht’s fascinating but flawed book, Genius & Anxiety: How Jews Changed the World, 1847–1947, seems to argue that they are. By trade a journalist, novelist, and historian of culture, and most especially musical culture in all its forms, Lebrecht considers “being Jewish” as either “having Jewish parents” or “practicing the Jewish faith.” Why someone whose parents were Jewish but who personally was not should be considered “Jewish” is not entirely clear. It is true that some Jews who nominally converted to Christianity nevertheless spoke and acted as if they were Jews. For example, Heinrich Heine, the subject of one of the many vignettes that constitute Lebrecht’s book, famously abandoned the Jewish religion but certainly was not much of a Christian.

On the other hand, many others whom Lebrecht also profiles certainly did not consider themselves Jewish: the German-American financier August Belmont, for example. Why then does Lebrecht identify them as Jews? Hitler might have done so because he considered the Jews a despised race. In analogous fashion, the State of Israel enacted its Law of Return, which accepts non-Jews who had a single grandparent who was Jewish, in order to welcome those whom the Nazis would have consigned to the gas chambers, again, on racial grounds. Lebrecht evidently sees Jews in the same light; indeed, when he quotes those who label Jews as a race, he never refutes their assertions.

At a minimum, Lebrecht appears implicitly to classify Jews if not as a race then as an ethnic group. And he is prepared to validate what many consider to be ethnic Jewish stereotypes: “unquenchable optimism ... a macabre sense of humor, a dazzling turn of phrase, and a capacity for improvisation.” Yet regardless of whether he considers Jews to be race or ethnic group, he overlooks the light brown Jews of Yemen, the dark brown Jews of Cochin, and the black Jews of Ethiopia. As it happens, not only the State of Israel but strictly Orthodox rabbinic authorities consider these people to be full-blooded Jews. And they are Jews because of their religion—not because of their ethnicity.

Lebrecht evidently adopts the racial/ethnic approach in order to cast the widest possible net over those whose great accomplishments he wishes to highlight as being products of their Jewishness, even if they or their parents were baptized. As he puts it, paraphrasing Psalms 121:4, “their Jewish psyche neither sleeps nor slumbers.” Moreover, he argues that in

every person of genius who appears in this book, there runs a current of existential angst. Jews in the nineteenth century and the first half of the twentieth century are gripped by a dread that their rights to citizenship and free speech will be revoked.

Why, however, should this fear of losing one’s rights affect converts to Christianity, or, even more so, children of converts? Did Benjamin Disraeli, who features in this book, truly believe he would be stripped of his rights? What about American Jews? Did anxiety affect their behavior if they did not convert?

Lebrecht’s assertion would certainly surprise the millions of Jews who immigrated to America precisely in order to breathe and live freely. Certainly, some Jews converted to Christianity for social reasons, but until the second half of the twentieth century the vast majority did not. American Jews might have faced some discrimination well into the 1960s, but they never feared that they would lose their rights as free citizens of the country that had welcomed their parents and grandparents. Evidently, Lebrecht is not aware of George Washington’s letter to the Hebrew congregations of Newport, Rhode Island, dated August 18, 1790, in which he famously wrote:

For happily the Government of the United States, which gives to bigotry no sanction, to persecution no assistance requires only that they who live under its protection should demean themselves as good citizens, in giving it on all occasions their effectual support … May the Children of the Stock of Abraham, who dwell in this land, continue to merit and enjoy the good will of the other Inhabitants; while every one shall sit in safety under his own vine and figtree, and there shall be none to make him afraid.

LEBRECHT IS strongest when he writes of the lives and music of composers, musicians, and their conductors, songwriters, and entertainers. His longer sketches range from Gustav Mahler (a converted Jew); to Arnold Schoenberg (another converted Jew) to Sarah Bernhardt (a baptized half-Jew), George Gershwin, Jerome Kern, and the young Leonard Bernstein. He finds time for some far more obscure musical types: the cantor Abraham Zevi Idelsohn and the musicologist Robert Lachlan. He also pays some attention to novelists—the baptized half-Jew Marcel Proust, Franz Kafka, Stefan Zweig, for example, and a few scientists as well, but they are in the distinct minority.

Other career paths do not fare as well or are not mentioned at all. One searches in vain for major military figures such as Colonel Emile Mayer, the influential theorist of mechanized and air warfare, whose most famous acolyte was Charles de Gaulle; General Sir John Monash, Australia’s greatest military leader, whose name graces a major Australian university and a $100 million museum in France commemorating the role of the Anzacs in World War I; and Major General Jack Faraj Rafael Jacob, who led the Indian forces that liberated what became Bangladesh in their smashing 1971 victory over Pakistan.

Nor can one find sports figures such as the American baseball slugger and Hall of Famer Hank Greenberg, who ignored the anti-Semitism that accompanied his efforts to surpass Babe Ruth’s home run record (no anxiety there); or Maurice Podoloff, first president of the National Basketball Association, the league that is now a worldwide phenomenon, as the recent death of Kobe Bryant has again made abundantly clear.