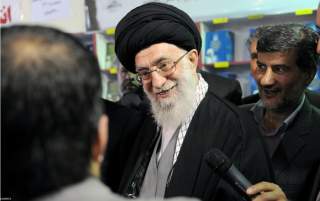 On May 6, Iran’s hardline Fars News Agency reported that “an informed Saudi source” had told them that a prominent Saudi Shiite cleric would be executed today, May 14. The cleric, Nimr Baqir al-Nimr, had been sentenced to death last October in a trial that Amnesty International had called “seriously flawed” and “part of a campaign by the authorities in Saudi Arabia to crush all dissent.” Nimr had been arrested in 2012 over remarks critical of the Saudi government; his violent arrest and his apparent mistreatment afterwards prompted significant protests. Fars News’ claim of his impending execution spread like wildfire in Iranian and Shiite press outlets, hyped by sharp remarks against the Saudi regime from within the Iranian government.

This morning, Vox’s Zack Beauchamp published an article stating that Saudi Arabia was “poised to” and “set to” execute Nimr. The sourcing on the story appears to go back to that original Fars News article.

How? Beauchamp hyperlinks his claim to a May 12 article on the website of Reprieve, a British organization which advocates against the death penalty and for the rights of people affected by the war on terror. Reprieve’s article states that “it emerged that the [Saudi] authorities plan to execute [Nimr] on Thursday [May 14].” This claim, in turn, is linked to a May 7 article on BBC Arabic. The article’s opening lines? “Saudi Arabia plans to execute Shiite cleric Ayatollah al Sheikh Nimr al Nimr, according to Iran’s Fars News Agency. The agency quoted a Saudi source saying that the execution will be carried out on May 14.” The article goes on to suggest that Saudi authorities haven’t confirmed or denied the date of the execution.

Fars News is not a reliable source. It is closely connected to hardline elements within the Iranian regime and regularly posts calumnious and far-fetched tales about those the worst elements within the Iranian regime want to target, along with more general conspiracy theories (a headline from last January: “Snowden Documents Proving ‘US-Alien-Hitler’ Link Stun Russia”).

It is, of course, still possible that Fars News actually does have a source within the Saudi system, and possible that Nimr was indeed slated to be executed soon. (A Fars story said on Tuesday that the execution had been postponed.) But it’s more likely that this was a bit of Iranian disinformation, consonant with a broader, ongoing Iranian propaganda campaign against the Saudi government linked to the war in Yemen. That the claim has seeped into the Western press in this roundabout way offers a cautionary tale in how a deliberate lie, repeated enough, can spread.