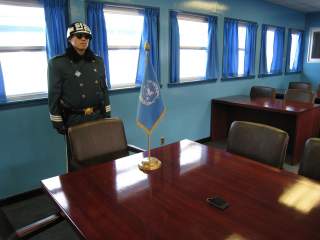 North Korean officials were set to gather with private American experts for unofficial talks this week in New York, but the Trump administration refused to issue visas for the North’s top representative. So no talks.

What does the administration believe it achieved by blocking the meeting?

Of course, the State Department refused to comment. One can only assume that it acted in response to Pyongyang’s recent missile test and apparent assassination of Kim Jong-nam, the older half-brother of North Korea’s leader. But cutting off talks hurts America as much as, if not more than, the Democratic People’s Republic of Korea. After all, the latter is used to being isolated.

The DPRK appears committed to being a nuclear state. Its missile and nuclear programs steadily expanded while the Obama administration largely refused to have contact. Estimates are fraught with uncertainty, but the North may have enough nuclear material for around twenty nuclear weapons today and in just a few years could be able to deploy an arsenal of as many as one hundred weapons.

At the same time, Pyongyang is proceeding to develop intercontinental missiles. At some point in the not too distant future, the DPRK will be able to miniaturize warheads and place them on missiles capable of hitting targets in America. Refusing to engage won’t make that prospect go away. Instead, it will maximize the fear, antagonism and pugnaciousness which have characterized North Korean policy for years.

As a presidential candidate, Donald Trump posited the possibility of meeting the DPRK’s Kim Jong-un, a stance he reiterated last week, but the Trump administration may believe it to be premature to take any initiative toward the North. Indeed, with virtually no one home at the State Department other than Secretary Rex Tillerson and professional staff, it’s not clear who could propose and implement policy toward the North. However, in this case, the administration need do nothing other than issue visas for visiting North Koreans.

The Trump administration, and certainly the United States, gain nothing by preventing private Americans from meeting with North Korean officials. The so-called track 1.5 talks (track two talks normally involve nongovernmental participants on both sides) were organized by Donald Zagoria of the National Committee on American Foreign Policy and would have involved Victor Cha, Robert Gallucci and other seasoned Korea hands. Similar talks have occurred in the past, but these would be the first in America since 2011.

The North Korean delegation was to include Choe Son-hui, head of the American affairs bureau at the DPRK Foreign Ministry. She has previously met with Americans and remains influential in Pyongyang’s uncertain political climate.

The purpose of the meeting was to unofficially explore possible options for defusing crises, solving problems and improving relations. Policymakers could pick up any ideas which seemed to have promise.

No one was predicting a breakthrough. The North’s latest missile test was routine, just another day in the office, so to speak, in Pyongyang. The mid-range missile was nothing new and couldn’t reach America.

However, the decision to use a deadly nerve agent to kill a member of the ruling family in a public area of an airport in the capital of a friendly state was an extraordinary breach of international norms. It showed callous disregard for the lives of the traveling public and a willingness to abandon even the pretense of restraint.

Moreover, add to Kim Jong-nam’s assassination the newly reported execution of state security officials in Pyongyang. This suggests a leadership that is fearful, not secure. It might be as ill-prepared as the Trump administration.

Nevertheless, time and effort could yield some progress. Almost certainly, time and effort would be necessary to achieve even modest progress. Thus, the sooner contacts occur, the better. Indeed, with the Trump administration unready to act, this is a particularly good time for private initiatives.

But there will be no talks this time. So the North Korean horror show will continue regardless of bad reviews. In another couple of months, the North may add another nuclear weapon, warns Siegfried Hecker of Stanford University’s Center for International Security and Cooperation. And another after that. And after that.

Everyone is concerned about the DPRK. No one has any good ideas for how to dissolve tensions. Military strikes could lead to full-scale war. Sanctions have so far been a dead end. China isn’t inclined to destroy its ally and hand Washington, DC a geopolitical victory. The Trump administration’s choices seem to come down to hoping for a change of policy or a miracle—perhaps a North Korean Moses to let loose a modern plague or two on the North.

There is no obvious answer as to what will work. But despite the understandable reluctance to appear to acknowledge the Kim regime by opening communication channels, engagement shouldn’t be seen as a reward. It’s simply what states do with other states, irrespective of their opinions of one another.

Certainly, talking isn’t likely to make the problem worse, and it appears to be the only path that moves forward. Although where it would ultimately lead, no one knows.

In any case, Washington shouldn’t stand in the way of private discussions with Pyongyang. Doing so isn’t going to make the North any more pliant. And tossing aside what might have been used by Kim to open a dialogue could make him less likely to respond in the future.