Divided We Fall: Why the ‘America First’ Policy Has Created New Problems 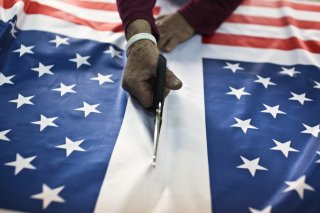 It was the kind of spectacle that only Hollywood could produce. Scores of searchlights crisscrossed the night sky, illuminating fancy floats below. Ten live bands filled the grounds with music fit for the extravaganza. And the stars came out in force because everyone wanted to be there. John Wayne was there, and so was Mickey Rooney. The “Brazilian Bombshell” Carmen Miranda enchanted the crowd, while others swooned at the French-born actor Charles Boyer, still glowing from his performance in the hit film Gaslight. More than one hundred of the most renowned celebrities performed, mingled, and jockeyed to be seen. Half a million spectators braved the cold November chills since most did not yet own a television. In 1947, TV was just beginning to penetrate American homes as the long postwar economic boom began, and TV crews were there to capture the event. The comedian Danny Thomas got a raucous laugh by shivering on stage, reflecting what the crowds were feeling. He bowed in mock reverence at California’s Governor Earl Warren, who was seated with his wife on stage. The mood that night was ebullient, a striking contrast to the abject suffering that had brought them all there.

Across the Atlantic, Europeans were starving. The war had crippled food production. The massive bombing of roads, bridges, canals, and railway lines had shattered transportation routes, making the transit of food to cities that much harder. Drought had withered crops, further depleting what little food remained. More than two years had passed since Germany’s surrender, but the lives of average people had only worsened. Tens of millions of children were enduring malnutrition, stunted growth, and disease. Mothers jostled and shoved their way into the scrums surrounding canned food distribution sites. Others picked through garbage dumps, searching for any edible scraps. With winter rapidly approaching, Europeans desperately needed sustenance or millions would soon die. The continent was facing a grim postwar apocalypse, and America had been asked to help. The half a million people who gathered that night in Hollywood had come to launch a distinctly American solution: the newly minted Friendship Train.

It began as a publicity stunt, the brainchild of Drew Pearson, America’s best-known syndicated columnist. Pearson had witnessed Russian Army forces in France being lauded for supplying food aid while American shipments went unnoticed. Pearson wanted America to get credit for the humanitarian efforts it was making. Since 1946, Americans across the country had voluntarily gone hungry several days a week, eating less to make more food available for shipment to Europe. At President Harry Truman’s urging, Americans observed “meatless Tuesdays,” cut down on bread consumption and tried to reduce food waste. Exports rose but that was not enough to rectify the problem. By the fall of 1947, the situation had grown dire. The government intensified its efforts, but the public had to pitch in more. In one of Pearson’s columns, he proposed a Friendship Train that would race across America collecting food for Europe’s hungry masses. He thought that if celebrities could accompany the train, the crowds would gather and donations would rise. Europeans would then see the true heart of the American people. But neither Pearson nor any others could have imagined just how ardently Americans would get on board with the simple idea of giving.

As the train prepared to leave Los Angeles, the nation’s most celebrated songwriter, Irving Berlin, led the crowd in a round of God Bless America, a song he had introduced less than a decade earlier. Hollywood’s show-stopping sendoff contained eight freight cars full of food, including 160,000 pounds of sugar given by Hawaii, whose Governor of course attended the glamorous event. From Hollywood, the train sped through California’s breadbasket. Bakersfield supplied 80,000 pounds of grain. Fresno donated crates of raisins. Merced gave more dried fruit and canned milk. In Stockton, people held up signs reading “Hunger is the enemy of peace,” “Food for our Friends,” “and Bonjour, vive La France.” Oakland, San Francisco, and Bay area cities provided even more, throwing in a $10,000 cash donation.

The train picked up more food in Reno, where both the Mayor and Governor came out to greet it. Omaha added 50,000 pounds of flour plus more cash contributions. Stunned by the extent of the average American’s generosity, French foreign minister Henri Bonnet flew to meet the train in Omaha and witnessed for himself the spontaneous outpouring of support. He called it “America’s far-reaching gesture of amity.”  And that reach just kept extending.

It was not just white Americans who joined in giving. Black people donated across the country. A group of Black Americans in Los Angeles pooled their funds to purchase a truckload of groceries for the train. Native Americans gave as well. Sioux chief Ed White Buffalo, his wife and their three children, all in traditional dress, presented the train with seventy-eight ears of corn. Rich, as well as poor folks, gave. Henry Kaiser, a leading industrialist and future founder of the healthcare company Kaiser Permanente, made sure to be photographed loading boxes onto train cars as part of his contribution. A seventy-three-year-old small-town grocer, Frank Tessier, donated a sack of flour from his store. Even little children joined in the event. One four-year-old boy donated four hundred pennies to the cause, providing perfect footage for the newsreels.

Cities vied to give the most of whatever they had. The tiny town of Sidney was not even on the schedule for a visit, but the town’s leaders convinced the train to stop and accept the contributions of its residents. One boy literally offered the shirt off his back, which was immediately auctioned for the cause. Though the town barely numbered ten thousand residents, it raised $12,000. In Aurora, John Crumm made a special effort to gather food for the train. Crumm had been a prisoner of the Japanese during the war and knew the pain of hunger. He organized a group to pick the corn that still remained in the fields and otherwise would have gone to waste. It was enough to sell for $825 worth of flour. By the time the train reached Council Bluffs, it stretched to fifty-seven cars. And that town added five more. The train then rumbled on through Iowa, picking up more food and money everywhere it went. But Kansas broke all records, adding eighty-three boxcars of wheat. Governor Frank Carlson addressed an audience of thousands saying, “We have so much, the need is so great, and it takes so little from the individual that we must not fail to do our duty.”

Try as they did, no city could top the fanfare that New Yorkers gave: forty cars of food plus a ticker-tape parade. More than 100,000 New Yorkers lined the streets to celebrate this extraordinary act of giving. Even Hollywood’s audacious sendoff could not compare to the show that New York put on. Two railway barges laden with food took victory laps around the Statue of Liberty as jets of water one hundred feet high arched across them in majestic streams. Then the Friendship Train’s supplies were loaded onto the first of four ships that would cross the Atlantic to deliver its cargo to France. With the smashing of a champagne bottle on its bow, the USS Leader was re-Christened the “Friend Ship” and sent on its way. Those shipments would go not just to the French, but to Italians, Germans, and Austrians, America’s former foes.

Politicians of both parties attached themselves to the popular phenomenon. New York’s Republican Governor Thomas E. Dewey, eyeing yet another run at the presidency, called the train “an important contribution to world peace.”  New York City’s Democratic Mayor, William O’Dwyer, convened a ceremony at City Hall, where thousands of children, released from school, were invited to participate in the festivities. The Mayor proclaimed the episode “a  material symbol of the desire of  our people to relieve the hunger  and suffering of our fellow humans  in Italy and France.” Warren Austin, America’s Ambassador to the United Nations, simply called it an act of “peace-mongering.”  New Yorkers gave an additional $73,000 toward the purchase of food. And throughout the episode, every corporation and labor union—from teamsters to dock workers, from railways to shipping lines—provided its services entirely free of charge. The hope had been to deliver the food to France and Italy by Christmas. At the ceremony, the French Consul General called the Captain of the Friend Ship “a real Santa Claus.”

In the end, the Friendship Train had swelled to an astonishing 481 cars, with the first shipment of food to France weighing more than eight million pounds. The film producer, Harry Warner, Chairman of the train committee, declared that “no other humanitarian appeal in history ever had such a quick and tremendous response.” The committee had chosen Warner (of Warner Brothers Studio) to oversee the effort precisely because it wanted him to generate footage to play in movie theaters across Europe. The entire project was intended as a propaganda bonanza, a chance to showcase America’s goodness on film. It was as if Americans were desperate to show the world who they truly were. But why?