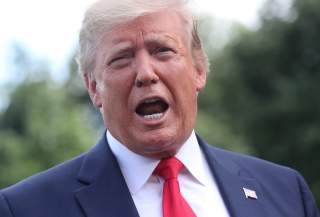 This evening President Donald Trump will officially launch his reelection campaign at a rally in Orlando, Florida. The campaign’s first hiccup occurred before it even began, when a leak (a ubiquitous problem for this administration) over the weekend of internal poll numbers has dampened enthusiasm from supporters.

From March 15 to March 28, the nascent campaign conducted polling in seventeen states using multiple possible Democratic nominees, according to ABC News. Not every state poll was leaked, and all of the polls show President Trump facing former Vice President Joe Biden, who’s been the frontrunner since his announcement in late April.

The Trump campaign’s polling shows Biden beating the incumbent by double digits in crucial states like Wisconsin, Pennsylvania, and Michigan. The numbers show Biden leading Trump by seven points in Florida, the state where the president has spent the most time outside the beltway since his inauguration. In Texas, a requirement for any Republican victory in the Electoral College, Trump beats Biden by only two points.

“Only Fake Polls show us behind the Motley Crew. We are looking really good, but it is far too early to be focused on that. Much work to do! MAKE AMERICA GREAT AGAIN!” President Trump tweeted. The denial didn’t stop the campaign from cutting lose three of its five pollsters, either out of frustration with their numbers or an attempt to stem the leaks. One of the polling firms kicked to the curb was Kellyanne Conway’s, who is now senior counselor to the president.

“Polls are always bad for me. They were against Crooked Hillary also. Something weird going on at Fox. Our polls show us leading in all 17 Swing States,” Trump tweeted in part, dismissing the poll’s accuracy. While not calling them fake, 2020 campaign manager Brad Parscale was quick to portray the March polling as an outdated snapshot. According to Parscale, major events had changed the political playing field in the past two and a half months, including the conclusion of the Mueller investigation. Attorney General Barr released his memo on the Mueller report on March 24, halfway through the poll.

Despite his derision towards “Sleepy” Joe Biden, the former vice president appears to be the best positioned to challenge Trump in the general election. His familiar face and his plea for a more ethical, humane political discourse have kept his primary polling in the low to high thirties. In a primary field of over twenty candidates, Biden is the unquestioned frontrunner. This is to the consternation of the progressive wing of the Democratic Party and candidates such as Senator Bernie Sanders, who believe they have just as strong a chance at defeating Trump in the Midwest.

While possibly an accurate picture of the race three months ago, the March polling will not be relevant to the November 2020 election. Statistician Nate Silver described the waste of a news cycle as “preposterous.” Previous polling this early had Walter Mondale beating incumbent Ronald Reagan by ten points, Bob Dole defeating incumbent Bill Clinton, and Barack Obama losing reelection to a standard Republican.

Likewise, Biden must maintain his support against an array of opponents for another eight months before the first Democratic primaries. For a candidate with two failed presidential bids under his belt and some behind-the-times behavior, the need for continuous momentum might be more than he can bear.

Hunter DeRensis is a report for The National Interest.