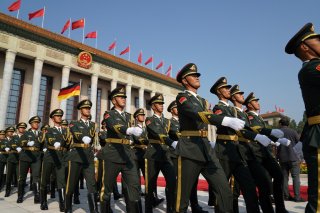 SEVENTY-FIVE years ago, George F. Kennan, who was charge d’affaires in the American embassy in Moscow, sent what has become known as the “Long Telegram” to the State Department. The frustration that Kennan had felt for years over what he believed was a naïve and excessively concessive policy toward Joseph Stalin and the Soviet Union welled up in him as he drafted an 8,000-word missive. In it, he ranged widely across history to warn about the Soviet threat. Kennan diagnosed a uniquely dangerous ideological amalgam of traditional Russian imperialism and Marxism-Leninism that had emerged after 1917 to constitute

a political force committed fanatically to the belief that with US there can be no permanent modus vivendi, that it is desirable and necessary that the internal harmony of our society be disrupted…the international power of our state be broken if Soviet power is to be secure.

But Kennan was also careful to note that the Kremlin, or, to put it more precisely, Stalin, was no gambler and usually withdrew “when strong resistance is encountered at any point.” The Soviet challenge to the international order could be checked but only if America mustered the gumption to recognize that it faced a dire adversary. Kennan’s stark depiction of Soviet intentions had a cataleptic effect in Washington. Secretary of the Navy James Forrestal, an anti-Soviet hawk par excellence, was riveted by the essay and disseminated it to President Harry S. Truman and his cabinet, as well as to senators and congressmen. A year later, Kennan expanded upon it at the behest of Forrestal, who had helped install him as head of the Policy Planning Staff, enunciating a new doctrine that he published under the byline “X” in Foreign Affairs. It was called containment.

No sooner did Kennan’s essay appear than Walter Lippmann denounced it. In a series of newspaper columns that were subsequently published as a book called The Cold War, Lippmann, a firm realist thinker, deemed X’s proposed containment policy a “strategic monstrosity”—one that would prove fiscally and militarily unsustainable. Kennan was mortified. In his memoirs, Kennan lamented that Lippmann had misconstrued his recommendations: “He interpreted the concept of containment in just the military sense I had not meant to give it.” Perhaps. But with the North Korean invasion of the South, the die was cast. Under the guidance of Paul Nitze, who was Kennan’s successor at the Policy Planning Staff, the Truman administration drafted NSC-68. It codified containment by stipulating that the Soviet Union was “animated by a new fanatic faith” and that a nuclear arms buildup was imperative.

If Lippmann attacked the containment doctrine for being too bellicose, many on the Right decried it for not being aggressive enough. Rollback, not containment, was in order. Senate Republicans such as William Jenner flayed Truman’s Secretary of State Dean Acheson as a “Communist-appeasing, Communist-protecting betrayer of America.” Nor was President Dwight D. Eisenhower exempted from the charge of appeasement: William F. Buckley, Jr. declared that permitting Soviet Premier Nikita S. Khrushchev to journey across the United States in 1959 signified the “death rattle of the West.”

When the Cold War ended peacefully on American terms, Kennan was widely hailed as the prophet who had helped make the West’s triumph possible. But the dissolution of the Soviet Union didn’t usher in a new era of unanimity about American foreign policy. Instead, it triggered a prolonged search on the Right for a fresh crusade, one that led to the invasions of Afghanistan and Iraq. Containment was out. Regime change was in. In his second inaugural address, President George W. Bush almost made Woodrow Wilson sound timorous by comparison: “It is the policy of the United States to seek and support the growth of democratic movements and institutions in every nation and culture, with the ultimate goal of ending tyranny in our world.” The results were calamitous. Bush’s successors endeavored to clean up the mess but often ended up compounding the original damage. Early on, President Barack Obama preached self-effacement on a tour of the Middle East, but lurched into a misbegotten war in Libya that ended up inflaming tensions in Syria and exacerbating the flow of refugees to Europe. Next, President Donald J. Trump tried to promulgate a new foreign policy based on “America First” that antagonized American allies, failed to improve relations with Russia, and wavered between flattering and insulting China.

SO, IS the moment propitious for a return to an older containment doctrine that might serve as the animating spirit of the Biden administration? In this issue, Robert D. Kaplan and Hal Brands each suggest that Kennan’s original conception deserves a fresh look. Like Graham Allison, who attracted widespread attention with his book Destined for War: Can American and China Escape Thucydides’ Trap?, Kaplan and Brands identify China as the principal challenge confronting America. Brands argues that the containment doctrine allowed an imperfect democracy to outperform

an enemy that often seemed to epitomize authoritarian discipline. There is no guarantee that America can replicate this feat against China, a country more economically and technologically dynamic than the Soviet Union. But neither does it seem wise to bet that a country with all of China’s internal and geopolitical challenges will ultimately be a world-beater.

Kaplan stresses the need for a sober analysis of the China challenge. According to Kaplan,

Like Kennan’s Long Telegram and X article, a successful grand strategy towards China should describe the root of the problem, the sources of Chinese regime behavior, and lay out a plan emphasizing what not to do. Concentrating on what not to do will eliminate extreme viewpoints, and identify practical constraints on our China policy: constraints originating, as with Kennan’s containment theory, with an implicit understanding of what the American people can tolerate and what they can afford.

Any China policy must be based on a realistic assessment of Beijing’s intentions and capabilities. As Paul Heer, a former National Intelligence Officer for East Asia and a distinguished fellow at the Center for the National Interest, has noted, China does not seek to head a new global order and exhibits few qualms about engaging in peaceful coexistence with democratic capitalism. Unlike the former Soviet Union, it is not a missionary state. Rather, in classic realist fashion, it aspires to maximize its power and influence, whenever and wherever it can, without incurring unsustainable costs or engaging in feckless adventures, something that has been a conspicuous feature of American foreign policy over the past decades. It’s also the case that Chinese nationalism is not a recent phenomenon but rooted in grievances that date back to the nineteenth century, when the country was carved up by the imperial powers during the Opium Wars. Put otherwise, Xi is not concocting Chinese resentments but expressing them. Publicly belittling and berating China is likely to foment the very nationalist impulses that the West should be seeking to allay.

IT HAS become an article of faith among many in Washington that a clash with China is inevitable. China, we are told, is a great power in statu nascendi that not only threatens to rival but surpass America. Perhaps it should not be surprising, then, that the Biden administration has evinced a confrontational stance towards China. During the first meeting in Anchorage between the Biden administration and Chinese officials, Secretary of State Antony J. Blinken stated that America has “deep concerns with actions by China, including in Xinjiang, Hong Kong, Taiwan, cyberattacks on the United States, and economic coercion toward our allies. Each of these actions threaten the rules-based order that maintains global stability.” The Chinese delegation responded that America has habitually “exercised long-arm jurisdiction and suppression and overstretched the national security through the use of force or financial hegemony.” These tense exchanges may have masked the common interest that each side has in dealing with the other, whether the issue is trade or the environment.

Indeed, Kurt Campbell, who is serving as Indo-Pacific policy coordinator, and Jake Sullivan, who is national security advisor, proposed a fairly cautious strategy toward China in a joint article in Foreign Affairs. It is considerably more nuanced than the showdown in Anchorage might suggest. They call for “managed coexistence” and “sustained competition,” observing that both Washington and Beijing “will need to be prepared to live with the other as a major power.” There is nothing predestined about great power rivalries leading to war, as Gregory Mitrovich notes in this issue. Great Britain was able to accommodate the emergence of the United States as a great power by the end of the nineteenth century. Eventually, Washington came to play the role of Rome to Britain’s Greece, as Harold Macmillan put it. Elbridge Colby in his essay for this issue audaciously explains that Washington can fortify its position, not by emphasizing an alliance of democratic states that seek to balance China, but by pursuing “an interest-based approach to its network of allies and partners. …In this approach, shared values can play a valuable role as a supplement to our fundamental approach but should not be the focus or driver of Washington’s strategy.”