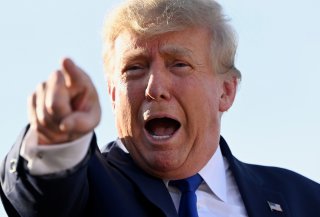 Political tea leaves are best read warm, but sometimes things get in the way. The horrendous massacre of Texas school kids even as last Tuesday’s primary voters were casting their ballots resulted in an understandable distraction from the results the day after. Nevertheless, there were some interesting trends and patterns, and perhaps a few clues as to what lies ahead in November.

If one had to pick a single quote to sum up the lessons of the May 24 primary results, it would be the one uttered by former Vice President Mike Pence on the eve of the voting in Georgia.

“Elections,” the laconic old gray veep declared, “are about the future.”

Sometimes it’s that simple, and last Tuesday was one of those times. The most dramatic race of the night, the battle for the Republican gubernatorial nomination in Georgia, pitted the GOP governor, Brian Kemp, a popular, conservative incumbent endorsed by Pence, against former Senator Dave Purdue, who lost his 2020 bid for re-election in a run-off just weeks after Donald Trump’s unsuccessful bid for a second presidential term. Many election analysts think that one of the reasons Purdue lost in the 2020 run-off was Trump’s wild attacks on Governor Kemp and Georgia secretary of state Brad Raffensperger, whom he blamed for his defeat.

The Trump charges of a rigged election in Georgia, never legally proved, may have persuaded some angry Trump supporters to sit out a run-off election that their hero had already declared fixed. If this was the case, Trump was at least partially responsible for Purdue’s being out of a job—and the Democrats in control of the Senate—when Joe Biden was sworn in as president. It also adds an element of farce to loser Purdue’s willingness to join Trump’s vendetta against Kemp on behalf of the very man who may have cost him his own job in the Senate.

Whatever the case, rank-and-file Georgia Republicans voted overwhelmingly against Purdue and for Kemp last Tuesday, proving that, like Pence, they think elections are supposed to be about the future, not paying off old scores. Lest there be any doubt about this, Raffensperger also ran far ahead of his Trump-endorsed opponent, easily passing the 50 percent mark and thereby avoiding a runoff.

The race for the Georgia GOP senatorial nomination was won by Herschel Walker, of football fame, and a celebrity whom Trump urged to run. But just how important Trump’s endorsement was is difficult to say. Walker, an apolitical local hero state-wide probably has stronger positive numbers—and much lower negatives—in Georgia than the man who endorsed him.

Indeed, if you look at the most ballyhooed Trump endorsement victories to date, you have to wonder just how important the endorsements really were. Like Walker in Georgia, in Ohio, best-selling author (Hillbilly Elegy) and successful financier J.D. Vance was already a celebrity with an inspirational rags-to-riches personal history before The Donald decided to embrace him as his own. The same applies to TV superstar Dr. Mehmet Oz whose razor-thin lead in the race for the Pennsylvania senate nomination may yet face a recount.

With candidates like Walker, Vance, and Oz, Trump’s endorsements may have been a case of the tail wagging the dog. Indeed, the main benefit to the candidates may not have been the endorsements themselves. Their real impact may have been the excessive coverage they received from the Trump-obsessed mainstream media. This meant that the names and faces of the endorsees dominated the headlines and sucked some of the air out of the candidacies of qualified but non-celebrity opponents.

It is also highly unlikely that candidates like Walker, Vance, and Oz will play the role of mindless Trump pawns if elected. In fact, having rather healthy egos themselves, they might quickly come to resent Trump if he characteristically tries to hog the credit for their own hard-fought victories.

And then there is the matter of the big pivot from intramural to intermural political competition. This will soon begin as more and more GOP House, Senate, and gubernatorial candidates, having clinched their nominations, shift into general election mode, seeking the support of not only Trump voters but swing constituencies of suburban women, moderate to conservative Democrats and independents, and a growing segment of the so-called Hispanic vote. Inflation, lawlessness, resecured borders, tax and regulator relief for ordinary Americans, and a firm but measured foreign policy are all issues that Republican candidates across the country can rally around, with or without a Trump endorsement. This is especially true at a time when, as even the New York Times has reluctantly conceded, only 21 percent of Americans believe that the country is “headed in the right direction,” and Republicans continue to outperform Democrats as the party of preference in generic polling.

When the dust settles come November, the results will be keyed to the future—not the politics of vengeance—to a promising new crop of Republican elected officials rather than to Trump’s sour grapes.