Does Russia See a War Threat in Warsaw? 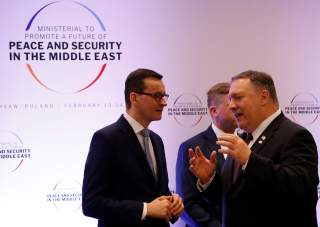 In a surprising twist on Ostpolitik, the United States has become entranced by the charms of Poland. Warsaw has diligently sent contingents off to Afghanistan, and agreed last year to increase their numbers. It has also become a reasonably large market for U.S. armaments. While Washington admittedly did not get too excited about Poland’s global climate change conference last fall in Katowice, U.S. leaders chose to host a major Middle East Conference in Warsaw earlier in February 2019. However, the grand “dessert” following this diplomatic buffet is likely still to come: the opening of “Fort Trump” for the permanent stationing of U.S. troops on Polish soil. Indeed, Warsaw has made it clear that it is willing to commit significant financial resources to such a novel basing arrangement.

That move would be quite consistent with the Trump administration’s hard line on Moscow. If imposing additional economic sanctions and expelling diplomats was not enough, Washington opted to arm the Ukrainian government with lethal weaponry to wield against the breakaway eastern regions. Russian nationals were apparently killed by U.S. special forces in Syria last year. The U.S. military has been involved in exercises taking place all around Russia’s borders from Georgia to Ukraine to the Baltics to the Arctic, including the largest ever post–Cold War NATO exercise that was held in Norway during late 2018. President Donald Trump has sharply criticized NATO allies for failing to pay for adequate defenses (although NATO aggregate defense expenditure is over ten times that of Russia) and for pursuing cooperative energy projects with Russia, especially Berlin’s Nord Stream Project. Most recently, the Trump administration is going all out to drive the pro-Russian leadership out of power in Caracas, and has declared that the United States will leave the Intermediate Nuclear Forces (INF) Treaty. Yet, somehow the current United States president is still accused of being a “Russian stooge,” so that a shiny, new U.S. base in Poland remains a distinct possibility, if only to prove once and for all that the president has anti-Moscow credentials.

This Russian-language analysis regarding the ever-stronger bond linking Warsaw and Washington provides a window into contemporary Russian strategic thinking. Journalist Mikhail Korostikov published a detailed analysis of the Warsaw Middle East Summit in the Russian-language newspaper Kommersant in mid-February. The subtitle of the piece conveys accurately enough the goal of the conference that “discussed steps for the containment of Iran [обсудили меры сдерживания Ирана]. Predictably, the article spends much time chewing over attendance at the summit, noting that Moscow refused to send a delegation. Korostikov observes that London had dispatched its foreign minister, but that both Berlin and Paris had declined to do so, and the EU’s top diplomat Frederica Mogherini also took a pass.

Displaying a Russian fondness for military analogies, Korostikov writes caustically: “The paucity of high-level diplomats from other countries was compensated for by a large-scale American landing [Отсутствие высокопоставленных дипломатов из других стран компенсировалось масштабным американским десантом].” He quotes Vice President Mike Pence in explaining that Tehran is the source of radicalism in the Middle East and that Abraham, biblical father of three great religions, provides a “sound basis for peace [хорошая основа для мира]” in the region. Korostikov also says that Pence promised to increase the number of U.S. troops in Poland that he says is now estimated to number around four thousand soldiers. This Russian coverage of the Warsaw Middle East Summit was not entirely negative. For example, Korostikov mentions the call made by the Polish prime minister for greater support of Turkey and Lebanon, which have carried the humanitarian burdens of accepting very large numbers of refugees from Syria. However, the general thrust of the article, not surprisingly, holds that the arrival of such a large, high-profile American delegation was “obviously intended to reward Poland for its tough, pro-American position on foreign policy and defense issues, sometimes at odds even with those of other EU countries. [очевидно, наградой Польше за ее жестку проамериканскую позицию в вопросах внешней политики и обороны, порой расходящуюся даже с позицией других стран ЕС].” Understood as another step along the lengthy journey of Middle East peace, perhaps this conference in Warsaw could not be termed a complete failure. Any conference on that subject that has both Israel and also Arab countries coming together at one event, could be seen as a partial success. But one is left wondering about the optics of a Middle East Conference that is somewhat near, but not actually in the Middle East itself—kind of like U.S. Africa Command in Stuttgart. Maybe American officials just like to sip cappuccinos in nice European cafes?

But let us return to the “grinding gears” of European security. Among the ways in which the U.S.-Polish intimate partnership is altering the strategic landscape of northern Europe is that Warsaw is beginning to import major quantities of U.S. weapons, including a system called High Mobility Artillery Rocket System (HIMARS). Unsurprisingly, Russia views this as a serious threat, especially to the Baltic Fleet anchorage in the Russian enclave of Kaliningrad, as explained in a mid-February analysis that appeared in the Russian-language newspaper Izvestiya. It is asserted that the system, when based along the shores of Gdansk Bay, will be sufficient to blanket the Russian Baltic Fleet with anti-ship cruise missiles in well under ten minutes’ flight time to target. The author mentions the area’s air defense umbrella [зонтик], but also talks about the possibility of deploying Russian naval special forces [морского спецназа] against the new missile sites. These mobile-strike systems that Poland is deploying will require for Russia that “locations of basing and their movements will be closely monitored by various forms of intelligence [Места их базирования и перемещения тщательно отслеживаются разными видами разведки].” If all else fails, then there is always the Iskander-M (that can carry a nuclear warhead) to defend Kaliningrad. No matter that the escalation problem in Eastern Europe grows ever more acute, the zloty/rubles will keep rolling for the military-industrial complex in both the United States and also in Russia.

As to the so-called “Fort Trump” concept, Russian media seems to have taken the proposal in stride, for now at least. One Russian-language survey of the issue from last fall quoted a member of the Polish parliament (Sejm) who said that “from a military point of view one base or one division means nothing. And in a political context, this always mean giving up a part of sovereignty. As a Polish patriot, I am opposed to the presence on the territory of Poland of any foreign troops—American, Russian, Chinese—any” [с военной точки зрения одна военная база или одна дивизия ничего не значит. А в политическом контексте это всегда означает отказ от части суверенитета. Я как польский патриот являюсь противником присутствия на территории Польши любых иностранных войск—американских, российских, китайских—любых].” Yet, even if such a symbolic base is very popular in Poland, this does not mean the new base is automatically good for U.S. national interests—far from it. With eight hundred or so military bases scattered across the globe, America should be looking to trim, not add.

The United States need not further inflame the new cold war with unnecessary and provocative basing arrangements in Eastern Europe. The idea of rejecting “Old Europe” in favor of “New Europe,” moreover, is patently ridiculous, confusing as it does sentimentalism and ideology for national interests and big countries for small. The road to Middle East peace evidently does not run through Warsaw. Nor does the road to stability and security in Europe, more generally. Brussels is the superior waypoint in all respects.

Lyle J. Goldstein is Research Professor in the China Maritime Studies Institute (CMSI) at the United States Naval War College in Newport, RI. In addition to Chinese, he also speaks Russian and he is also an affiliate of the new Russia Maritime Studies Institute (RMSI) at Naval War College.  You can reach him at   [email protected]. The opinions in his columns are entirely his own and do not reflect the official assessments of the U.S. Navy or any other agency of the U.S. government.