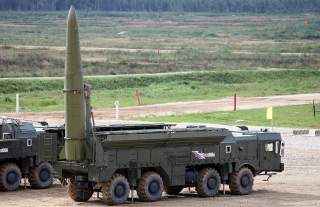 In 2019, the Russian garrison in Moscow's Kaliningrad exclave will get a powerful new rocket, the Kremlin announced.

Russian ground troops in the Western Military District will receive Iskander-M ballistic missiles in 2019, "completing" the "rearmament of the missile formations of the land forces," the Kremlin stated on Jan. 1, 2019.

The Iskander-M deployment escalates a years-long missile race pitting the Russians against the Americans and their European allies. The new rocket can carry a conventional or nuclear warhead.

The Russian defense ministry's announcement apparently refers to the Western Military District's 152nd Missile Brigade, whose base is at Chernyakhovsk in Kaliningrad, a wedge of Russian territory between Poland and Lithuania that's geographically separate from the rest of Russia.

The western unit's missile brigade possesses more than 50 vehicles, including launchers, command and maintenance vehicles and other support vehicles, according to the defense ministry.

The Iskander-M, which in its ground-launched version can hit with a roughly thousand-pound warhead targets as far as 300 miles away, is popular in the Kremlin. Iskander-M and other new weapons "confirmed their effectiveness" in combat in Syria, Deputy Prime Minister Yury Borisov said in September 2018.

Perhaps most surprisingly, the Kremlin modified Iskanders for aerial use. The resulting Kinzhal air-to-surface missile is a sort of "instant" hypersonic weapon that Russian officials have claimed can penetrate any defenses.

The Kremlin routinely declares its new weapons to be unrivaled and invincible. "The Iskander-M is the best missile system in its class, which is able to overwhelm any missile defense," government-run news agency TASS stated. “The Kinzhal has no analogues in the world,” the Russian defense ministry boasted.

In fact, many ballistic missiles, even shorter-range types, are hypersonic. That makes them difficult, but not impossible, to intercept. U.S.-made missile-interceptors such as the SM-3, Patriot and Terminal High-Altitude Area Defense, or THAAD, in theory can hit an incoming Iskander.

In July 2017, a THAAD interceptor destroyed a medium-range ballistic missile target during a test over Alaska. The SM-3 also has been successful in many of its recent tests.

The Kremlin previously had deployed Iskander-Ms to Kaliningrad on a temporary basis. A permanent deployment is provocative. Moscow reportedly plans to preemptively fire Iskanders in the early hours of a major war in the hope of destroying U.S. and NATO air and missile defenses.

Iskander-Ms in the exclave could hit targets in Poland, the Baltic states and southern Sweden. Citing Russian missile deployments, in October 2018 the United States said it would withdraw from the 1987 Intermediate Nuclear Forces Treaty, which banned rockets with ranges between 310 and 620 miles. The treaty did not apply to the Iskander-M.

The Iskander-M's earlier appearances in Kaliningrad reportedly spurred the Polish government to order from the United States eight Patriot missile batteries worth around $6 billion.

But Moscow has claimed that it was the United States and NATO that started the back-and-forth missile deployments when it began installing SM-3 missiles in Romania and Poland in order to defend against an Iranian rocket attack.

The Kremlin rejected the Iran rationale for the West's missile build-up. A popular Russian conspiracy theory claims that the West's missile-shield is a cover for a forces planning to preemptively strike Russia.

“The Russians sincerely believe the U.S. missile defenses in Poland and Romania will be armed with nuclear weapons and used as covert INF forces to decapitate the Russian leadership,” explained Jeffrey Lewis, a nuclear expert with the Middlebury Institute of International Studies at Monterey.

"From the very outset we kept saying that in the opinion of our experts the deployment of an anti-missile defense poses a threat to Russia," Russian spokesman Dmitry Peskov said. "The question is not whether measures will be taken or not; measures are being taken to maintain Russia’s security at the necessary level."