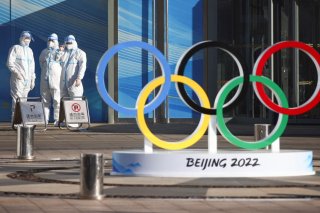 Citing China’s state-directed genocide of Uighur Muslims in Xinjiang province, the United States, the United Kingdom, Australia, and Canada earlier last month announced they won’t send diplomats to the Beijing Games. That’s a good first step, but Washington, its allies, and the private sector should do more to hold the CCP accountable for its human rights violations and counter Beijing’s increasingly belligerent politicization of sports.

Under Xi Jinping, the CCP has attempted to silence critical sports figures and to strongarm sports institutions into legitimizing the regime’s authoritarian rule. For example, when Boston Celtics center Enes Freedom criticized Xi on social media in October and then tweeted that China shouldn’t be allowed to host the Winter Olympics, Chinese streaming partners ceased their coverage of Celtics games. In 2019, when then-general manager of the Houston Rockets Daryl Morey tweeted in support of Hong Kong protesters, Beijing similarly pulled national broadcasts of NBA games and even asked the NBA to fire Morey.

Sensing that Peng’s disappearance had ignited a firestorm, Beijing turned to its longtime supporters at the International Olympic Committee (IOC), which has previously faced criticism for turning a blind eye toward China’s human rights record. Beijing rejected external inquiries concerning Peng’s safety and invited only IOC president Thomas Bach to a monitored video call with Peng and other IOC officials. Following the call, the IOC released a statement saying Peng is “safe and well,” but didn’t make the video or transcript available.

Rightly dissatisfied with the IOC’s inquiry, Washington and the Women’s Tennis Association called for further investigations. In response, Beijing has returned to a tried-and-true tactic: painting itself as the victim of unfair politicization of sports—the precise inverse of the truth.

Of course, Xi is not the first Chinese leader to harness sports for national goals, though his approach has been much more combative than that of his predecessors.

After a serendipitous encounter between Chinese and American table tennis players at the 1971 World Table Tennis Championships, Chairman Mao Zedong invited the U.S. team to China for a series of exhibition matches. This sequence of events became known as “Ping Pong Diplomacy” and is often credited with reviving diplomatic relations between the two countries, culminating in President Richard Nixon’s visit to Beijing the following year.

More recently, President Hu Jintao treated the 2008 Summer Olympics as an opportunity to demonstrate China’s economic and political maturation to the rest of the world. Though Beijing still faced international criticism for its human rights record, Hu pledged to loosen control of the media and sought to use the Olympics to showcase China’s rise and present the regime as a global leader.

Fast forward to the present, and Beijing is once again poised to host the Olympics, even as the CCP continues its genocide in Xinjiang. The CCP surely hopes the pomp and circumstance will drown out growing international criticism over its rampant abuses, such as forced sterilization of Uighur women.

This time, however, China will host the Games while facing a U.S. diplomatic boycott. But the Biden administration should not congratulate itself yet. The White House sat on its hands for almost a year, limiting current options for recourse. Had it acted sooner, the administration could have placed more pressure on the IOC to consider relocating the 2022 Games over China’s human rights violations. The Biden administration missed another opportunity to hold the CCP accountable when it declined to ask Olympic sponsors to reconsider their business agreements with China.

The White House’s inaction has elicited bipartisan concern. Sen. Rick Scott (R-FL) called the diplomatic boycott a “weak choice” and said that the president ignored his repeated calls to select an alternate location for the Games. Rep. Tim Ryan (D-OH) argued the president did “not go far enough,” claiming that Beijing’s misbehavior does not earn China the honor of hosting the Olympics in any capacity.

While a full boycott would unfairly punish American athletes, there are other measures Washington should take. The Biden administration should begin by urging other American allies to join the United States in a diplomatic boycott of the Games. UN high commissioner for human rights Michelle Bachelet has stated that her office will soon publish its findings of human rights abuses in Xinjiang. The White House should trumpet this report to encourage others to boycott the Games—particularly the UN secretary-general, who plans to attend the event.

In addition, American broadcasters should not shy away from using the Games as a chance to educate their audiences on the realities of China’s repressive system. To prevent China from controlling the public narrative, U.S. networks should highlight the CCP’s abuses in Xinjiang.

It may be too late to relocate the Winter Olympics, but there’s still time to ensure they are forever remembered as what many critics have called the “Genocide Games.”

Zane Zovak is a research analyst at the Foundation for Defense of Democracies (FDD), where he focuses on the diplomatic and military actions of the People’s Republic of China. FDD is a Washington, DC-based, nonpartisan research institute focusing on national security and foreign policy.