Will the NBA Stand Up to China’s Bullying for Enes Kanter? 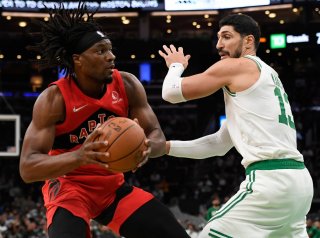 Boston Celtics center Enes Kanter made headlines last week when he uploaded videos to social media calling Chinese president Xi Jinping a “brutal dictator” and criticizing Chinese repression in Tibet and Xinjiang. The last time an NBA employee criticized the Chinese Communist Party (CCP), the league offered an abject apology to Beijing. This time, the NBA should defend its players’ right to speak their minds about abuse overseas, the same way it encourages them to speak out against injustice here at home.

In 2019, then-general manager of the Houston Rockets Daryl Morey tweeted, “Fight for Freedom. Stand with Hong Kong.” He promptly deleted it amid growing pressure from China as well as prominent players around the league. Fellow Rocket James Harden said, “We apologize. You know, we Love China.” Lebron James suggested Morey was “either misinformed or not really educated on the situation.” In retaliation for Morey’s tweet, Chinese companies pulled their NBA sponsors and refused to air Rockets games, costing the league hundreds of millions of dollars.

Morey received a measure of bipartisan support in Washington, however, where Sen. Ted Cruz (R-Texas) accused the NBA of “shamefully retreating” in pursuit of profit, while former presidential hopeful Julian Castro tweeted that the United States must “not allow American citizens to be bullied by an authoritarian government.” President Donald Trump declined to take an explicit stance on the matter, saying that the NBA and China “have to work out their own situation.” However, he did assert that silence from the coaches was “pandering to China.”

Despite undermining Morey and his support of the Hong Kong protests, the NBA has attempted to rebrand itself as an organization committed to social justice. During the 2019-20 playoffs, players from six teams refused to take the court in protest of police violence and the death of Jason Blake. The playoffs resumed after the NBA reached an agreement with the players union to establish a social justice coalition to promote civic engagement through voting drives and advocate for police reform.

In a letter to league employees, Commissioner Adam Silver declared, “I wholeheartedly support NBA and WNBA players and their commitment to shining a light on important issues of social justice.” Kanter’s recent videos are poised to test whether the NBA’s commitment to social justice stops at the water’s edge.

From Turkey, Kanter previously sparked controversy in his home country with partisan attacks on President Recep Tayyip Erdogan, at one point calling him the “Hitler of our century.” Kanter is a vocal supporter of former Erdogan ally Fethullah Gulen, a cleric who presides over a shadowy network that used to be highly influential within Turkey’s media and law enforcement circles. Gulen’s network helped Erdogan consolidate power by eliminating his secular opponents through smear campaigns and show trials, only to become a target of Erdogan’s ire.

As a supporter of Gulen, Kanter may not be an ideal representative of democratic values. But free speech is not reserved for those who have the most admirable opinions. Despite Erdogan’s attempts to intimidate him, Kanter continues to be outspoken on human rights issues both within Turkey and beyond, and has expressed gratitude for the voice the NBA has given him. “This platform allows me to speak my mind,” he said in 2019.

Yet antagonizing Beijing is much more expensive than offending Ankara. Tencent, the NBA streaming partner in China, has temporarily ceased live-streaming its coverage of Celtics games. Beijing responded similarly to criticism from another prominent Turkish athlete, Mesut Ozil, who was playing for the British soccer club Arsenal when he expressed support for the Uyghur minority in Xinjiang. Beijing removed Arsenal from the national broadcast schedule.

China’s response to Kanter may narrow the NBA’s profit margins, but now the league has a second chance to show it won’t capitulate to Beijing. The NBA along with the Celtics should issue a formal statement supporting Kanter’s right to express himself freely. President Joe Biden should also issue such a statement, projecting a united front against Chinese authoritarianism. Congress and the administration should also reaffirm the Tibetan Policy and Support Act, which asserts Tibet’s right to select its own leader, and the Uyghur Human Rights Protection Act, which requires U.S. government agencies to report on human rights abuses against the Uyghur Muslim minority.

The NBA is not the only organization guilty of subverting its values to protect its access to the Chinese market. Hollywood has frequently issued apologies for referring to Taiwan as a country or cut images of the Taiwanese flag from movies. Tech companies have blocked apps such as Yahoo Finance or the New York Times to comply with arbitrary Chinese complaints.

Kanter posted his videos about Tibet and Xinjiang just one day after the Olympic torch arrived in Beijing, amid consistent calls from human rights groups to boycott the games over Chinese treatment of Tibet, Uyghur Muslims, and Hong Kong. How the United States and the NBA respond to Kanter’s video will likely set the precedent for how others vocalize their concerns in the lead-up to the games. If the United States wants to send a message regarding China not only to Beijing but also to the international community, then America must first stand with Kanter.

Zane Zovak is a research analyst at the Foundation for Defense of Democracies (FDD), where he focuses on the diplomatic and military actions of the People’s Republic of China. He contributes to FDD’s China Program and Center on Military and Political Power (CMPP). For more analysis from the author, the China Program, and CMPP, please subscribe HERE. Follow FDD on Twitter @FDD and @FDD_CMPP. FDD is a Washington, DC-based, nonpartisan research institute focusing on national security and foreign policy.