Donald Rumsfeld Was the Last Good Secretary of Defense 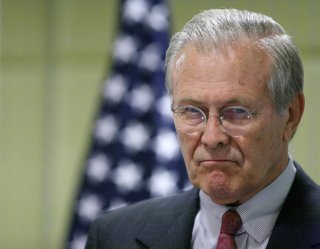 Rest in peace Donald Rumsfeld, who died today at age 88. He will be remembered most for two separate tenures as secretary of Defense, the last of which was particularly remarkable.

Plenty will rush to blame Rumsfeld for the shortcomings of the U.S. invasions of Afghanistan and Iraq, conducted respectively in 2001 and 2003 on his watch. I take a different view: that those extremely complex military missions were conducted magnificently and only later turned to disaster at the hands of establishment mediocrities other than Rumsfeld.

It’s important to think back to the terrifying days after the September 11, 2001 attacks on America. Everyone in the country was stunned at the sick horror inflicted on our country by the Islamists of Al Qaeda. No one had expected war and we looked for leadership. Rumsfeld had been confirmed earlier that year on the day George W. Bush became president and set out to make the military more agile. But less than 10 months later, we still had a military largely designed to fight the Cold War, impeded further by eight years of neglect and reductions under Bill Clinton.

And yet in less than a month, the Pentagon under Rumsfeld launched a comprehensive air campaign that was soon accompanied by light and agile ground forces. They partnered with local Afghans opposed to the Taliban, who had hosted Al Qaeda boss bin Laden.

Two months and one day after the 9/11 attacks, Kabul fell to allied forces—an unprecedented military accomplishment in world history considering its remoteness and the logistical difficulties involved. Al Qaeda never regained its ability to strike the United States.

Alas, Rumsfeld was just one voice among many in the senior ranks of the Bush administration. Along with his deputy, Paul Wolfowitz, Rumsfeld was far more inclined than others to perceive that the Free World was at war with a hostile ideology—call it Islamism, political Islam, or radical Islam—that animated opponents as diverse as Al Qaeda, the Muslim Brotherhood, and the Iranian regime. Others in the administration, especially Bush, his national security advisor Condoleezza Rice, and Secretary of State Colin Powell, were clueless and resorted to politically correct bromides: that “Islam is peace,” as Bush said, or that Iran could be a partner in our fight.

That last assumption would lead to disaster in Iraq. Whereas Iraqi dictator Saddam Hussein was just barely tolerable before 9/11, the fear that a subsequent attack on America could use weapons of mass destruction pushed the administration to invade and take out the dictator. There was also a charitable view of Iraqi culture—naively held by many including myself at the time—that it was ready for liberal democracy, which in turn would deflate the impetus for both Islamism and the fascist Baathist ideology used by Saddam.

Regardless, Rumsfeld’s Pentagon delivered a masterstroke of an invasion. Emphasizing “shock and awe” with unprecedented accuracy and speed, the U.S.-led coalition defeated the Iraqi military in just under a month.

From there, matters went downhill. It was never Rumsfeld’s idea to disband the Iraqi military or put a Foreign Service Officer, Paul “Jerry” Bremer, in charge of Iraq as de facto viceroy—a move that was part of Rice’s machinations from the White House, aided by Powell. Nor did Rumsfeld and his lieutenants pretend that Iran was anything other than a malevolent force in Iraq.

After it was clear that our intelligence bureaucracy had let down America for neither the first nor last time in wrongly asserting Saddam had weapons of mass destruction, Bush allowed the mission in Iraq to morph into democracy building. We still suffer the consequences of that decision today.

Perhaps there is utility in that our political system blames civilian leaders for our military misfortunes instead of our military leaders. This factor helped the military remain the sole institution in America that had broad public support until recently. But it also obscures historical reality, which in the case of Iraq and Afghanistan has involved nearly two decades of generals and defense intellectuals lying to the American public about progress against top national threats and the very nature of those threats.

Rumsfeld, in contrast, told it like he saw it. His press conferences were adored by the public and hated by much of the media. They were so popular that a jealous White House put an end to them. He foreshadowed a facet of Donald Trump in that he refused to allow the media to set the terms of the debate.

Hopefully, history will be fairer to Rumsfeld than those who demonize him to cover up their own incompetence. The job of Secretary of Defense is effectively an impossible one at which to succeed, but Rumsfeld had two good runs, including a first tenure after the collapse of the Nixon administration and as the military reeled from defeat in Vietnam. He was succeeded in his second stint by Bob Gates. Gates, in turn, has been followed by a long string of abysmal leaders who have left us with a 1930s-style posture of unreadiness to deter war with China, while bogging down our military with pointless commitments elsewhere. We could really use a Rumsfeld now to clear out the deadwood in the defense establishment.