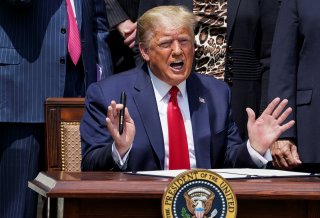 In May 2003, George W. Bush gave his infamous “mission accomplished” speech that the U.S. had won the Iraq war. This was followed by many years of blood, sweat, and tears in that country as the U.S got bogged down in a conflict that never seemed to end.

One has to wonder whether something similar might happen to President Trump in the months ahead following the victory lap he took today in his economic coronavirus war with the announcement of a very good monthly employment number. Like President Bush before him, he might find that complicated wars are not so easily won.

In looking at today’s surprisingly very much better than expected U.S. employment numbers, one has to hope that despite Mr. Trump’s victory lap, U.S. policymakers will not be lulled into a false sense of complacency about the US economic outlook. While these most welcome employment numbers certainly indicate that the coronavirus induced collapse of the U.S. economy has been very much less pronounced than most economists had feared, they have not dissipated the major downside risks both at home and abroad that the U.S. economic recovery still faces.

It would be a gross understatement to say that Wall Street economists were excessively gloomy about the current state of the US labor market. While they expected that an additional 8.5 million jobs would be lost in May, it turned out that 2.5 million jobs were created. Similarly, while they expected that the rate of unemployment would surge from 14.7 percent in April to 19.5 percent in May, it turned out that unemployment declined to 13.3 percent.

Before jumping to the conclusion that these numbers signal that the worst of the recession is over and that we are now well on our way to a sharp V-shaped recovery, we might pause to reflect that, at 13.3 percent, unemployment today is still very much higher than it was in the depth of the 2008-2009 Great Economic Recession. We might also want to reflect that as much as half of the gain in last month’s welcome employment numbers came from the restaurant, lodging, and entertainment sectors of the economy. Those latter gains would be vulnerable to any second wave of the coronavirus epidemic.

The truth of the matter is that we cannot rule out the possibility of a second wave of the pandemic later this fall that could eliminate at least part of the employment gains made last month. Indeed, this is precisely the risk about which many epidemiologists are now warning us. They are doing so on the basis of what they consider to be a premature lifting of the lockdown as well as the apparent lack of social distancing in the large political demonstrations that are now sweeping the country.

Today’s strong employment numbers also do not eliminate the risk that the pandemic might have given rise to profound changes in behavior that might make it difficult for a strong economic recovery to gain traction. Scarred by unemployment, households might be more inclined to save than to spend. Overburdened with excess office space as a result of an accelerated trend to work at home, construction companies might be less inclined to undertake new construction projects. Uncertain about the security of supply chains, companies might be less inclined to invest.

Yet another risk to the U.S. recovery that does not receive the attention that it deserves is those that might come from abroad. This is all the more to be regretted given the record wave of debt defaults that are now expected to occur in the emerging market economies. It is also to be regretted given the very parlous state of the European economy that could be paving the way for another Eurozone sovereign debt crisis.

After several months of unprecedented economic gloom, it is understandable that we would want to celebrate any real positive news. However, policymakers would be ill-advised to let their guards down and to take their eyes off the many downside risks that still confront the U.S. economic recovery. Rather they should stand ready to provide the economy with more budget support if needed.