Is Donald Trump Preparing for War with North Korea? 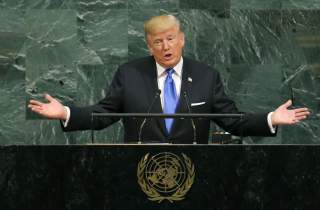 Harry Kazianis recently wrote that if some sort of major action is not taken, Kim Jong-un will have a weaponized hydrogen bomb in relatively short order. An excerpt of the article can be found below:

North Korea’s hydrogen bomb test is a game changer. The trendlines are clear: Unless some sort of major action is taken, in relatively short order, Kim Jong Un will have a weaponized hydrogen bomb—the most powerful of all nuclear weapons—and the missiles to deliver them to all points in the continental United States.

And once again, the world gets this terrible news from Kim’s now favorite delivery method—what amounts to a selfie with his new atomic menace and accompanying nuclear test. Far from being a maniac, he has shown himself to be a shrewdly calculating leader who has repeatedly backed up his boasts with successful atomic tests.

Now to be fair, we don’t have any real confirmation, besides a picture and a news clip from North Korean state media that Kim has an operational Hydrogen Bomb that is miniaturized or a missile that can carry it aloft to a target and an atomic test. But experts are already concluding that the scale of the test indicates that North Korea does indeed have a hydrogen bomb capability.

I for one am not shocked that Kim seems to have achieved a working design. Last month, I cited a Pentagon source declaring that Pyongyang was 6-18 months away from a Hydrogen Bomb. As of now, my source is still sticking to that assessment but added nothing Kim does or can do shocks him anymore.

Indeed, we must remember a few additional benchmarks Kim would need to hit in order to have an H-bomb for the battlefield. For Kim to have confidence in such an advanced nuclear weapons design, he would want to test it, potentially on several occasions, to ensure a working system, as well as multiple yields. So far, despite what Pyongyang has told us, Kim has never tested anything with the destructive power of a Hydrogen Bomb—except for maybe last night.

My assessment is that Kim does not yet have an operational H-Bomb, but is doing what he always does—proving to the world he has the resources, technology and capability to deploy a powerful nuclear deterrent. But he could have taken an important first step towards testing a viable design.