Donald Trump Should Capitalize on Trade Opportunities in Asia 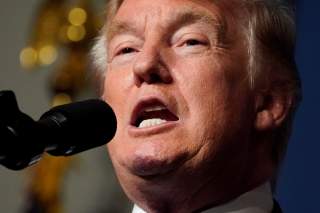 I have previously laid out an American vision for Southeast Asia with security, economic and governance pillars. On the economic front, I argued that the United States should seek to shape a Southeast Asia that embraces free-market economics and is more deeply integrated with global trade and financial flows.

President Trump’s decision, even if warranted, to withdraw from the Trans-Pacific Partnership (TPP), a free trade agreement that included four Southeast Asian states, along with the president’s generally negative outlook on trade have made this vision look unrealistically aspirational. But as the president heads to Vietnam to attend the Asia Pacific Economic Cooperation (APEC) summit and to Manila for meetings surrounding the East Asia Summit (which the president will not attend), there are steps that he can take to embrace an economic approach to Southeast Asia that would benefit regional countries and the United States.

The case for doing so is clear. Within the subregion, Vietnam, Indonesia and the Philippines are particularly important due to the size of their gross domestic products ($191 billion, $859 billion and $292 billion, respectively), their GDP growth rates (6.3 percent, 5.2 percent, 6.6 percent), and their large populations (92.7 million, 258.7 million, 104.2 million). Vietnam’s national wealth has grown from $72 billion in 2000 to $342 billion in mid-2016; wealth per adult has tripled over that time frame to $5,275 last year. The middle class, meanwhile, is expected to double between 2014 and 2020, growing from twelve million to thirty-three million people.

Indonesia’s national wealth more than quintupled between 2000 and mid-2016. Its middle class is currently expanding from eight to nine million people each year, a trend expected to continue through the end of the decade. More than 60 percent of the country’s population is working age, and the labor force is set to grow due to the country’s young population. Indonesia’s median disposable income is forecast to reach $11,300 in 2030, up from $6,300 in 2014.

The Philippines’ national wealth has expanded at a similar clip as Indonesia’s since the turn of the century. The Asian Development Bank, meanwhile, has reported that the Philippines could join the ranks of the upper middle-income countries by 2020. The number of middle class households is projected to grow by 41.8 percent between 2015 and 2030, when it will reach 8.4 million; median disposable income may grow from $6,710 in 2014 to $11,429 in 2030, a 70 percent increase.

In short, potential opportunities for American businesses and American workers abound. President Trump should work to ensure that those opportunities materialize.

A Trade Agenda for Southeast Asia

How can President Trump accomplish that goal? Not long after his inauguration, the president discussed his preference for bilateral trade deals. His participation in the APEC summit affords him an opportunity to prove that was more than just talk. The White House press secretary’s statement on the agenda for the president’s Asia trip announced a speech at the APEC CEO Summit, in which President Trump “will present the United States’ vision for a free and open Indo-Pacific region and underscore the important role the region plays in advancing America’s economic prosperity.”

Assuming agreeable consultations with Prime Minister Abe beforehand, the president should announce his intention to quickly conclude an FTA with Japan and that he expects it will serve as a model for additional FTAs going forward. Why should the Trump administration’s economic approach to Southeast Asia begin with Japan? First off, TPP negotiations laid the groundwork in controversial areas, like agriculture, for a bilateral effort—trade talks would not need to start from scratch. Better yet, Derek Scissors and Dan Blumenthal, in a recent study for the Project 2049 Institute, point out that a bilateral FTA “can be more effective than the TPP at opening services trade, protecting intellectual property [IP], and limiting state-owned enterprises [SOEs], which would be vital in winning American political support.” Importantly, a U.S.-Japan trade agreement “involves no fear of job loss due to low wages.” In short, if Washington and Tokyo are willing to look at the full range of possible economic gains, they could do so in relatively speedy fashion, thus signaling American seriousness in continuing to expand trade relations abroad and undoing some of the damage the president’s earlier anti-trade rhetoric has done.

A high-standard bilateral FTA is a realistic goal. Per Scissors and Blumenthal, on agriculture, Japan would likely need to maintain its TPP commitments to reduce tariffs and expand country-specific quotas in a number of categories. Japan and the United States would seek to agree to specific rules for digital trade, with the “free flow of data” serving as the “guiding principle.” In the highly politicized energy sphere, the United States should look to liberalize its export controls and protect exports to Japan against future U.S. administrations interested in reducing fossil-fuel production; both countries should commit to lowering barriers to energy investment, whether in production or infrastructure. An FTA could also see investment barriers reduced in America’s transportation sector and in Japanese industries relating to national security.

Finally, a bilateral Japan-U.S. FTA could “ban SOEs from nearly all sectors, using a broad definition of what qualifies as an SOE.” Ideally, both countries would commit to “very tight limits” on their own SOEs.

Scissors and Blumenthal argue that a U.S.-Japan FTA of this nature could lay out a path for Vietnam, Indonesia and the Philippines to become “richer, stronger, more market-oriented, and perhaps more democratic.” As noted above, of the ten ASEAN countries, these three economies are particularly attractive for the expansion of trade ties. To be sure, Singapore will remain important as a financial and shipping hub in the region, but there does not exist the potential for a significant expansion of trade ties. Thailand has a large economy and is a top  twenty-five U.S. trade partner, but has been suffering from weaker growth; Malaysia has a large economy and healthy GDP growth (5.4 percent), but a relatively small population. Vietnam, Indonesia and the Philippines are not ASEAN’s only important economic actors, but they are likely to drive economic growth in a way the others will not. America should be poised to both support and reap the benefits from that growth.

Having announced negotiations for a U.S.-Japan FTA, President Trump should tell his Vietnamese counterparts that Hanoi, which has made clear its interests in a bilateral FTA, will be next in line and that he expects the U.S.-Japan agreement to set useful benchmarks, particularly on SOEs and IP, for any future deals. The president should explain that a deal that does not set strict limitations on SOEs and does not meet the high standards for protecting IP is a deal that is not in American economic interests.

A bilateral U.S.-Vietnam trade pact makes sense for the United States. In 2015 and 2016, Vietnam was the United States’ fastest growing export market (23.3 percent in 2015; 42.3 percent in 2016) and also the largest—exports grew by more than $4.4 billion over those two years, more than twice as much as the second-largest growth market. Such exports are abetted by a booming middle class, as Stuart Schaag and Barbara Banas of the State Department have argued:

According to a 2013 study by the Boston Consulting Group, Vietnam represents the fastest growing middle class in the region. In fact, Vietnam’s middle class is predicted to double by 2020, exceeding 30 million consumers. We are already experiencing the benefits of this rising middle class. In 2015, there were over 18,700 Vietnamese students studying in the United States. That same year, over 85,000 Vietnamese travelers visited the United States, representing the largest growth in Asia (up 30% from 2014). Vietnam is now ranked among Asia’s top 5 retail markets. Consumer confidence is among the highest in Asia, where more than 90% of residents in Ho Chi Minh City consider themselves to be part of the middle class, a response rate higher than in Singapore, Jakarta or Kuala Lumpur.

A high-standard U.S.-Vietnam FTA would go beyond the TPP in lowering tariff and nontariff barriers and in creating conditions in Vietnam conducive to American business and American investment. The growth rate of U.S. exports to Vietnam could exceed that forecast under the TPP

A decision to pursue consecutive Japanese and Vietnamese FTAs may not mark a particularly ambitious trade agenda for Southeast Asia in particular, but it has potential. A successful U.S.-Vietnam FTA should offer encouragement to the region’s other (potential) economic dynamos, Indonesia and the Philippines, which had both previously expressed interest in the TPP (though with some trepidation), to reform and further open their own economies. A web of high-standard bilateral FTAs, or better yet, as Scissors and Blumenthal suggest, the evolution of the U.S.-Japan deal into a regional FTA could lead to greater prosperity at home and in Asia and shore up America’s strategic footing in Asia.