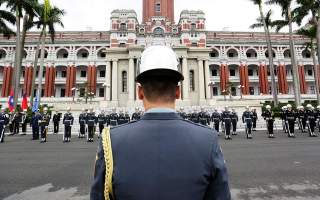 AMONG THE four traditional geopolitical flash points in East Asia—the Korean Peninsula, the South and East China Seas, and the Taiwan Strait—cross-Strait relations between China and Taiwan have been the least likely to generate troubling headlines in recent years. This changed in early December, when President-elect Donald Trump made the controversial decision to take a congratulatory phone call from President Tsai Ing-wen—the first official interaction between a U.S. president or president-elect and Taiwan’s leader since the abrogation of formal ties between both countries in 1979. In an interview shortly afterwards, Trump appeared to question Washington’s future commitment to the “one-China” policy that had guided the U.S. approach to cross-Strait relations for nearly four decades. Trump’s actions sparked a furious reaction from Beijing and set in motion a string of provocative Chinese moves that thrust the frozen conflict over Taiwan back into the international limelight.

But at the time of Trump’s intervention, relations between Beijing and Taipei were already rapidly deteriorating, with the fragile status quo that hitherto sustained them now fraying. The renewal of cross-Strait tensions was triggered by last year’s general election in Taiwan, which swept the Beijing-critical Democratic People’s Party (DPP) into power, whose leader Tsai Ing-wen was inaugurated as the island’s first female president in May. Tsai’s landslide defeat of the pro-Chinese Nationalist Party Kuomintang (KMT) marked the end of an era spanning nearly seven decades in which the KMT, with its coalition partners, had not once lost its majority in Taiwan’s parliament.

During the period of KMT preponderance under Tsai’s predecessor, former Taiwanese President Ma Ying-jeou, relations between Taipei and Beijing had been tranquil. A champion of integration and eventual unification with the mainland, Ma initiated a policy of continuous improvement of relations with Beijing. During his eight-year tenure, the two sides signed twenty-three cooperation agreements on issues such as trade, transit, aviation, tourism, joint crime fighting and judicial assistance. Considering how limited the interaction between Beijing and Taipei had been in the past, their rapprochement during the Ma presidency proceeded at an astonishing pace. Few things illustrate this better than the upsurge in people-to-people exchanges: Whereas prior to 2008 there were no regular direct flights operating between China and Taiwan, their number rapidly soared to nearly nine hundred scheduled commercial flights a week. More than four million Chinese visited Taiwan in 2015 alone, while approximately one million Taiwanese are now living on the mainland. These unprecedented developments culminated in a historic meeting between Ma Ying-jeou and China’s President Xi Jinping in November 2015, the first ever personal encounter of the Chinese and Taiwanese leaders since the establishment of the People’s Republic of China in 1949.

The “new normalcy” in bilateral relations brought on by Ma’s course of rapprochement with Beijing mitigated cross-Strait tensions and yielded a substantial “peace dividend” for businesses on both sides of the strait. But even if the KMT had not suffered a historic defeat in the 2016 elections, the long-term viability of these policies would have been doubtful. Opposition against Ma’s Beijing-friendly course had long been mounting in Taiwan. The policy of rapprochement masked the fact that both sides of the strait have been drifting further and further away from each other. Opinion polls have shown that the vast majority of Taiwanese support an improved dialogue with Beijing and the maintenance of the status quo in cross-Strait relations, but the proportion of those backing the idea of reunification with the mainland has long been dwindling. Around 60 percent of the people (and an even higher proportion among the younger generation) now regard themselves as “Taiwanese,” with only a third identifying as “both Chinese and Taiwanese.” In 1992, the number of those identifying themselves as Taiwanese had still been less than 18 percent.

This decisive shift in self-identification is a fairly new development. It found a particularly stark expression in the Sunflower Movement, a student movement that was formed in March 2014 to protest against the planned ratification of the Cross-Strait Service Trade Agreement. This comprehensive association treaty with Beijing would have opened up sensitive industries such as banking, healthcare, or telecommunications to Chinese investment, leading to an unprecedented degree of economic integration with the mainland. The Ma government tried to pressure the parliament into ratifying the agreement, avoiding public debate and communication with the affected actors and industries. But the vehement student protest movement, which proceeded to occupy the chamber of the Taiwanese parliament for twenty-four days, succeeded in stalling the agreement indefinitely. The Sunflower Movement, which at one point saw as many as half a million people take to the street, petered out, having achieved most of its immediate goals. But the potential for further mass protests has remained strong, as was illustrated in July 2015, when hundreds of students stormed Taiwan’s Ministry of Education in response to a proposed revision of the national school curriculum, which they claimed was aimed at promoting a pro-Beijing stance and the one-China principle.

Taiwan’s vibrant and assertive civil society stands in marked contrast to recent political developments in mainland China. Since Xi Jinping became China’s president in 2013, he has centralized power in a manner unseen for decades, including a distinct reideologization of Chinese politics and a tightening of repressive measures. China’s neoauthoritarian policymaking streak has widened the political gulf between Taiwan and the mainland even further, and it makes it particularly difficult for Beijing to come to terms with the kinds of policies represented by the DPP. Public disenchantment in Taiwan about a closer association with the mainland—especially among the younger generation—has been strongly reinforced by Beijing’s erosion of civil and political rights in neighboring Hong Kong. The Chinese leadership’s uncompromising reaction to the 2014 Umbrella Movement in Hong Kong (which maintained close contacts with Taiwan’s Sunflower Movement) and its recent ousting of elected parliamentarians from the city’s legislative council have magnified the political impasse that Hong Kong now finds itself in, demonstrating how little genuine progress there has been in implementing the principle of “one country, two systems” in practice. Considering that one country, two systems can be understood as Beijing’s proposed template for the (re)integration of Taiwan, the situation in Hong Kong has made the prospect of eventual unification with China even less palatable for large parts of the Taiwanese public.

But the primary source of discontent for Taiwanese voters has been the state of Taiwan’s ailing economy, which entered a recession in the second half of 2015 and grew by little more than 1 percent in 2016. Exports have languished, wages have stagnated for years, real income has declined, and social inequality has deteriorated. Considering that the prospects of the economy are intimately tied up with the state of cross-Strait relations—China and Hong Kong account for roughly 30 percent of Taiwan’s trade, 38 percent of its exports, and more than two-thirds of its total foreign investments—most of the Taiwanese public would be unlikely to endorse a policy of increasing antagonism towards the mainland. At the same time, however, cross-Strait economic relations have now lost much of their luster for the Taiwanese. Not only have polls shown that a majority of Taiwanese are worried about the potential consequences of deepening economic dependence on Beijing. The business environment for Taiwanese investors and producers in the PRC—who are estimated to have invested between $60 and $200 billion in mainland China—has been deteriorating in recent years. Taiwanese entrepreneurs are increasingly irked by China’s rising labor costs, the problems associated with environmental pollution, and the persistent bureaucratic hurdles erected by China’s central and regional governments. In addition, due to the technological upgrading and growing sophistication of China’s own manufacturing sector, many Chinese companies that used to form the supply lines of Taiwanese manufacturers have begun to engage in cut-throat competition with them. In light of the growing complications that Taiwanese businesses have been facing in China, they have begun to shift many of their production sites to South and Southeast Asia. Between 2001 and 2015, Taiwan’s trade with Southeast Asia increased from around $30 billion to almost $80 billion, and Taiwanese companies’ foreign direct investment into the six largest Southeast Asian economies doubled in the past five years. The DPP has actively endorsed this strategy of diversifying trade and investment away from China, and has pushed for a “Go South” economic policy of bolstering alternative trade ties with South and Southeast Asian countries. One of Tsai’s first acts as president was to establish a designated office to coordinate this “New Southbound Policy,” and her government has begun to launch trade offices in the states of the region and to offer credit lines to businesses investing there.

FOLLOWING TSAI’S inauguration as president of Taiwan, cross-Strait relations between Beijing and Taipei swiftly deteriorated. Although Tsai had previously served as a cabinet member during the presidency of Chen Shui-bian (2000–2008), a fierce critic of Beijing, she was generally regarded as a highly pragmatic politician capable of doing business with the Chinese leadership. It was during her tenure as Minister of Taiwan’s Mainland Affairs Council—the highest body coordinating relations with Beijing—that the “Little Three Links” were arranged in 2001 that provided the first trade, transportation and postal connections between Taiwan and the mainland. Throughout the election campaign and prior to her inauguration, Tsai had refrained from taking a clear position on the future of cross-Strait relations, but she had repeatedly expressed the desire to maintain the status quo.