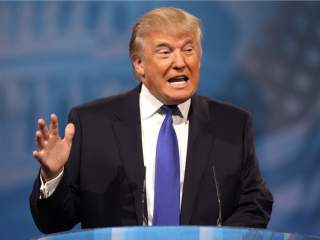 When it comes to national security, Donald Trump cannot be pigeonholed. He is neither a neocon, nor a true realist, nor a liberal interventionist. Nor, for that matter, is he a neo-isolationist. In fact, he seems to combine elements of all of the foregoing, and to be driven primarily by reflexive gut instinct rather than by a carefully thought-out set of policies. As he has himself acknowledged, "I watch the shows" to obtain national security advice. And why should he? He claims to have had more training at the (middle and high school level) New York Military Academy  "than a lot of guys that go into the military." Similarly, he has no supporting team of national security experts; after all, such a team would have to draw heavily upon the very Washington/Boston/New York crowd that Trump professes to despise.

With nothing but his gut to go on, Trump's Syria policy is not unattractive: He would "bomb the shit out of ISIS," have American boots on the ground in Syria, refuse to train rebels "we can’t control,” live with Assad because "his replacement would be worse" and work out a modus vivendi with Putin (who has reciprocated by endorsing his candidacy), which would include Russian bombing of ISIS. His reluctance to engage America in every humanitarian crisis will appeal to realist Republicans. His rejection of the Iran deal, on the grounds that Tehran cannot be trusted to adhere to its provisions, reflects the consensus among mainstream Republicans and seems vindicated by recent Iranian missile violations. And his Nixonian refusal to telegraphing his future policy moves stands in stark contrast to President Obama's counterproductive timetables for withdrawing forces from Iraq and Afghanistan.

On the other hand, the same Trumpian gut would cashier the Trans-Pacific Partnership, and, in violation of World Trade Organization ground rules, impose a 20 percent tax on imported goods. Trump would "correct" trade imbalances not only with China, but with Japan as well. Doing so not only would probably also violate WTO rules, but also, and crucially, most certainly would infuriate America's key Asian ally at a time when Tokyo has been building up its military capability to offset Chinese adventurism in the region.

Trump's gut also leads him to some very confusing, and fundamentally unrealistic notions about other American alliance relationships. He would have Germany defend Ukraine, although Chancellor Angela Merkel opposes arming Kiev's forces. He would "get India involved" to deal with  Pakistan's nuclear weapons program, although those weapons are aimed at India. He would support Israel unhesitatingly, indifferent to its settlements policy. His proposal to ban all Muslim immigration, and even travel to the United States, has infuriated America's friends in the Arab world in general, and in the Gulf in particular. And he remains committed to the policy that essentially launched his candidacy for the Republican nomination, namely, that he not only would ship millions of illegal immigrants to Mexico, but he also would get Mexico to pay for a wall to keep immigrants from entering the country illegally. Presumably, in order to implement the latter policy, he would invade Mexico, capture Mexico City and install an American puppet government that would authorize the payments he seeks.

Trump asserts that what passes for his foreign policy would be backed up by a powerful military that he promises to build up from its current underfunded state. He asserts that under his leadership it will be "so strong and so great and so powerful. . . . Nobody's going to mess with us." How the military would help him implement his proposals, and prevent others from ‘messing with us’ is far from clear.

Equally uncertain is exactly just what kind of military Trump has in mind. He would increase the defense budget. But how would he allocate it? Would he retain the current all-volunteer force? And, if so, would he propose pay increases higher than the 1.3 percent increase that was included in the Omnibus Appropriation that President Obama signed on December 18, and that was higher than Mr. Obama's original proposal to increase military pay by one percent? Would he reduce the Basic Allowance for (military) Housing, per the President's budget request, or increase it, as the Congress voted? Would he overhaul the Tricare health insurance program, as recommended by the Military Compensation and Retirement Modernization Commission (of which I was a member) or join the Department of Defense in making only marginal changes to Tricare? Would he save billions by closing down excess base structure, as the Pentagon requested, or leave bases untouched, as the Congress has preferred? In fact, where does Mr. Trump stand on any sort of Pentagon reform? Has he even heard of Goldwater-Nichols, much less taken a stand on the debate over the need to update the three-decades old initiative?

Watching televised discussions of defense issues has not led Mr. Trump to make any pronouncements about whether to increase, decrease or leave steady the funding for cyber related operations, for space based systems, for missile defenses or for special operations forces. He has said nothing about the role of the National Guard and Reserves, which was a major focus of debate between the Pentagon and the Hill, with the latter prevailing, at least with respect to the Guard's continuing to operate Apache attack helicopters. And, while emphasizing that he would strengthen the military, he has not indicated whether that means more larger ships like the DDG-51 (the Omnibus Appropriation funds a DDG-51 AEGIS destroyer above the President's budget request) or more smaller ships like the Littoral Combat Ship; more funding for F-35 aircraft or for unmanned aerial systems; increasing Army end strength, and if so, to what level.

One of Trump's very few concrete proposals, which he unveiled aboard the battleship USS Iowa, does relate to the Navy. In the course of what he billed as a national security speech aboard the battleship Iowa, Trump proposed to recommission battleships. In fact, this was done once before, in the 1980s, when battleships saw action off Lebanon and again during Operation Desert Storm. The ships proved too costly to maintain, and were deemed not cost-effective. They were mothballed again in the early 1990s and virtually no serious analyst has proposed recommissioning them.

It is true that much of the detail regarding the defense budget does not rise to the level of a candidate's pronouncements. But much does: a quick look at the national security speeches of successful Republican nominees from Reagan to Romney reveals considerable specificity about their plans for the military were they to be elected president. Moreover, those candidates relied on more than just short sound bites by televised talking heads to formulate their proposals. Instead, they drew heavily on the types of experienced national security advisors that Trump has studiously avoided.

Trump's gut instincts may serve him well in some cases; but it is far from sufficient for the commander-in-chief to rely on nothing more than gut. Donald Trump's simplistic sense of what it takes to lead the free world may score debating points, or rouse a campaign audience. But it seriously undermines whatever minimal credibility he still retains outside his hard core support, except of course, for Mr. Putin, whose primary he clearly already has won.