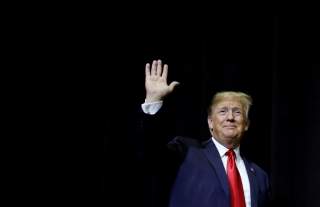 Bob Woodward’s book Fear: Trump in the White House and the anonymous op-ed in the New York Times attacking President Donald Trump have raised a predictable firestorm inside the Beltway. Many assert that the book and op-ed prove Trump’s fundamental unfitness for the presidency, while others worry they will merely serve to reinforce Trump’s suspicion that he can’t trust those around him, thereby leading him to become even less receptive to expert advice.

Nevertheless, while it’s certainly true that Trump’s pronouncements as described by Woodward and “anonymous” frequently come off as disjointed or impulsive, he also raises some critical foreign-policy questions that challenge the longtime Washington foreign-policy consensus but deserve to be taken seriously.

Consider Russia. In the New York Times op-ed “anonymous” writes that Trump “complained for weeks about senior staff members letting him get boxed into further confrontation with Russia, and he expressed frustration that the United States continued to impose sanctions on the country for its malign behavior. But his national-security team knew better—such actions had to be taken, to hold Moscow accountable.” This is part and parcel of the Beltway commentariat’s tendency to view Russia as the greatest threat the U.S. faces.

Despite the increasing tension between Washington and Moscow, however, Trump’s desire to improve U.S.-Russia relations actually represents a refreshing rethink. While today’s Russia is not the Soviet Union, Moscow still retains a spoiler's ability to impact America’s interests. For one thing, despite its conventional military weakness vis-a-vis the United States, Russia remains a nuclear superpower with the capability to destroy the United States a hundred times over.

Russia could also choose to openly increase economic and political support for North Korea—thereby weakening Washington’s ability to pressure North Korea to curtail its nuclear program—and the growing risk of an American-Russian military clash in Europe should not be underestimated either. Finally, it’s worth wondering about the efficacy of an American approach towards Russia that appears to simply be driving Moscow to align with Beijing. Given that China is clearly America’s greatest long-term geopolitical rival by dint of an increasingly powerful military, an economy that is expected to eclipse the United States’ economy with its size, and a strategy arguably designed to kick the United States out of Asia, shouldn’t Washington policymakers at least consider trying to improve relations with Russia to prevent the Moscow-Beijing alliance from turning into a formal anti-American alliance?

Woodward also reports that Secretary of Defense Jim Mattis grew frustrated when Trump repeatedly questioned the fairness of American military alliances, particularly Trump’s assertion that “we’re being played [as] suckers, especially NATO.” While Trump’s formulation may indeed be overly simplistic, the president was right to raise the so-called “free rider” issue with his advisers regarding NATO—something former President Barack Obama did as well.

For one thing, the United States comes out on the short end of the stick financially. NATO recommends that each member spend a minimum of two percent of its gross domestic product (GDP) on defense, yet according to NATO statistics for 2017 only four countries besides the United States meet this target. And realistically, if a conflict on NATO’s Eastern flank occurs, its American troops who will likely be doing the majority of the fighting and dying.

Germany represents a particular problem. Berlin possesses by far the largest economy in Europe, with a GDP approaching $4 trillion. Yet in 2017, Berlin spent barely 1.2 percent of its GDP on defense—representing a shortfall of tens and billions of dollars. Moreover, while the United States takes the lead in confronting Russia, Berlin builds the Nordstream 2 pipeline with Russia. Nord Stream 2 bypasses Germany’s central and east European allies—including Ukraine—costing them transit revenue and weakening their leverage over Russia. Germany has every right to pursue its own interests—even if a deal like Nord Stream 2 weakens Western sanctions against Moscow. But this type of self-interested behavior certainly lends support to Trump’s criticism of NATO.

Afghanistan represents another case where Trump’s instincts are correct while those of his officials are wrong. Woodward’s book presents Trump complaining about the war in Afghanistan during a July, 2017 meeting at the Pentagon and wondering “why you are jamming this down my throat?” Trump was asking a good question.

However almost seventeen years, thousands dead or injured and over one trillion dollars spent since American troops were first deployed to Afghanistan, the Taliban contests almost half the districts in country and American troops are still dying—and frequently at the hands of our Afghan ally troops no less.

While proponents of continued U.S. military involvement in Afghanistan assert that American troops must remain to prevent Afghanistan from being used as a base for terrorist attacks there’s a better way to solve this problem than continuing to keep fifteen thousand American troops fighting an unwinnable war. As MIT’s Barry Posen suggests, the United States should withdraw from Afghanistan but “tell the Taliban that our dispute with them is over, so long as they do not host international terrorists. If they are complicit in terror, the U.S. will retaliate.” Perhaps not surprisingly, no evidence exists that any of Trump’s advisers ever offered the president a solution like Posen’s solution.

To be clear, no excuse exists for Trump’s crude language or his disparagement of his top advisers. Moreover, Trump’s lack of intellectual curiosity and inability to think either tactically or strategically significantly diminishes his ability to turn his ideas into actual American policy.

Nevertheless, the disdain that Washington’s insiders have for Trump’s views also reveals a disturbing staleness in how its foreign-policy establishment has a stubborn refusal to think outside the box when it comes to promoting America’s national interests. And sadly, it’s not clear if this groupthink will change anytime soon.