Drones Have Wreaked Havoc in the Armenian-Azerbaijani Conflict 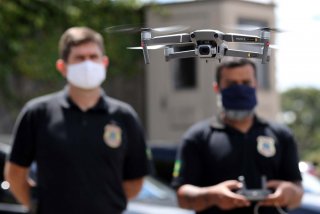 Worldwide military use of unmanned aerial systems (UAS) or drones has grown by leaps and bounds since the mid-1990s when the first General Atomics MQ-1 Predator took to the air.  Over the last twenty-five years, the number, type, and mission set of drones has expanded considerably, and the ongoing Armenia-Azerbaijani conflict suggests that drones will play an increasingly significant role in future conflicts.

Originally, the Predator served exclusively as a reconnaissance platform. That changed in 2001 when an MQ-1 successfully launched a Hellfire missile and hit its target on a test range in Nevada.

The MQ-1 and its younger sibling, the MQ-9, have been used as if they were manned light reconnaissance and attack platforms instead of autonomous systems. They have logged more hours per aircraft than any other manned reconnaissance platform and probably more than all manned fighters in the U.S. arsenal. These two aircraft are at the upper end of tactical drones with regard to size, weight, complexity and cost, and they have been incredibly effective for the United States and its allies.

Military UAS platforms in the medium to small categories run from hand-launched, short-range reconnaissance drones with electro-optical/infrared sensors, to medium-sized drones with several hours of endurance that can be used for reconnaissance and/or attack. And every system is capable of delivering significant tactical effects for the warfighter.

In January 2018, a swarm of “home-built” drones carrying small explosive devices attacked Russian forces at Hmeimim Air Base (AB) and Tartus Naval Base in Syria.  While neither the damage inflicted nor the effectiveness of Russian counter-drone systems has been independently verified, there is little doubt that the swarm of thirteen drones presented a significant targeting challenge to the defenders. The small size of the drones and their low radar cross-section made them hard to detect, and recent engagements of state of the art hunter-killer drones prove that, when the drones get through, they are deadly.

In the ongoing Nagorno-Karabakh conflict, the Azerbaijanis have employed three different drones against Armenian armor and personnel to great effect. The Turkish Bayraktar TB2 is a large drone, in the same class as the MQ-9 Reaper. It carries laser and infrared-guided anti-tank munitions. The Israeli Obiter 1K and Harop drones have been used for reconnaissance and recovered to fly again, or employed as kamikaze attack drones.  Collectively, these three types of drones reportedly destroyed more than eighty Armenian armored vehicles in the first few weeks of fighting.  Each has a significant loiter capability, and video from the ongoing Armenian-Azerbaijani conflict appears to show numerous systems operating in concert.

Saturating an area with unmanned hunter-killer systems like the Orbiter 1K and Harop drones can overwhelm even the best air defense artillery and missile systems currently fielded, which is one reason both China and the United States are researching technologies that feature swarms of drones.

China’s recent swarming experiments involve dozens of explosive-filled suicide drones launched simultaneously from specially designed vehicles and aircraft.  Once airborne, the drones can loiter over the battlefield hunting for targets or an operator can designate a target and send the drones to move together and destroy it.

While it may be hard to visualize the size and overwhelming nature of swarming drones, testing conducted by the U.S. Navy in 2016 graphically demonstrated the hopelessness one would feel as a target in the center of such an attack.

In that test, three FA-18s released 103 micro-drones over China Lake, California. The UAVs executed several missions/maneuvers showing the ability to operate together, deconflict flight paths and then simultaneously attack a single target.  The eyewatering video demonstrates the incredible tactical impact even the smallest drones will have on battlefields of the future.

For now, the Armenian-Azerbaijani conflict highlights the deadly mechanisms at play in modern warfare where drones can find and destroy virtually any target on the battlefield.  As long as these unmanned aerial systems have free movement above the enemy, they will wreak havoc on their armor, vehicles and fielded forces.

America has both a technological edge and decades more operational experience with offensive unmanned aerial systems than its global competitors. While that is a significant advantage, the losses that will come without an effective means of detecting and then countering or destroying the offensive drones of those who would do us harm will be substantial.

The Defense Department’s first joint strategy to counter small drones is about to hit Defense Secretary Mark Esper’s desk. That’s a step in the right direction. But DARPA and the Defense Department as a whole must put the development of counter-drone systems that can handle swarms of drones near the top of its growing list of priorities.

A twenty-five-year veteran of the U.S. Air Force, John “JV” Venable is a senior research fellow in The Heritage Foundation’s Center for National Defense.