Drug Cartels are Poisoning America, Data Analytics Can Stop Them 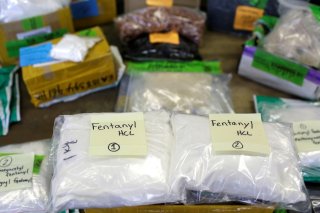 In the past two years, opioid deaths have spiked by 49 percent, hitting 69,710 in 2020. This under-reported national health crisis could soon get much worse.

For starters, there is the U.S. withdrawal from Afghanistan, which according to the United Nations Office on Drugs and Crime (UNODC) produced 83 percent of the world's opium from 2015-2020. For fifteen years, the United States tried to eradicate opium production in Afghanistan and failed. The Taliban taxed opium to help finance its insurgency.

“The Taliban have counted on the Afghan opium trade as one of their main sources of income,” said Cesar Gudes, head of the Kabul office of UNODC. As Afghanistan’s economy implodes, higher levels of opium production will likely be an important economic underpinning.

On September 27, the U.S. Drug Enforcement Administration (DEA) issued a Public Safety Alert, its first in six years, about “the alarming increase in the lethality and availability of fake prescription pills containing fentanyl and methamphetamine.” As DEA administrator Ann Milgram said, “Counterfeit pills that contain these dangerous and extremely addictive drugs are more lethal and more accessible than ever before.”

The DEA also reported that “The vast majority of counterfeit pills brought into the United States are produced in Mexico, and China is supplying chemicals for the manufacturing of fentanyl in Mexico.”

With nearly all opioids manufactured outside of the United States, a concerted national response is essential to fight the scourge. International drug cartels are sophisticated, creative marketers and shippers who use the Internet to market their products, while relying on the world’s postal services as a critical distribution component.

And there are no indications they have had supply chain bottleneck problems.

Law enforcement regularly tout in press releases how they have intercepted large amounts of illegal drugs through the international mail system.

A July 30, 2021, news release from the U.S. attorney for the Southern District of New York concerned the sentencing of a criminal nicknamed “Fentmaster” who was arrested after law enforcement “intercepted several packages containing kilogram quantities of fentanyl analogues imported from Hong Kong.”

A July 16, 2021, news release from the U.S. attorney for Utah announced the conviction of seven codefendants in “a drug trafficking organization that imported fentanyl and alprazolam from China and used the drugs to manufacture fake oxycodone pills made with fentanyl and counterfeit Xanax tablets.” The U.S. Attorney’s Office noted “more than 90” customers of the organization “died of drug overdoses.”

The above and other crimes can be deterred by enforcing the requirements for advanced electronic data (AED) on all in-bound packages to the United States. Shortly after the September 11 attacks, Congress passed the Trade Act, requiring AED on all in-bound international shipments delivered by private carriers.

The Trade Act envisioned that the U.S. Postal Service would soon be required to have AED, but that did not happen. In fact, the absence of AED led drug cartels to openly advertise to U.S. customers that they wanted to send them opioids via the international postal system.

In 2018, Congress voted overwhelmingly on a bipartisan basis to enact the Synthetics Trafficking and Overdose Prevention Act (STOP Act). Interim regulations from U.S. Customs and Border Protection (CBP) issued on March 15, 2021, however, still allow packages without AED to be delivered and more than 100 countries have exemptions from the AED requirement.

Whichever countries are now sending opioids to the United States, AED must be a central component of our drug interdiction arsenal. Due to its potency, fentanyl is ideally suited to go through the mail. DEA reports that one kilogram of fentanyl has the potential to kill 500,000 people.

AED requirements under The Trade Act curtailed potential mischief from the Taliban and other foreign adversaries. Nearly twenty years after that effective action, it is imperative to demand full enforcement of the STOP Act.

Furthermore, the hyper-growth in the sophistication of advanced electronic data considerably increases the success rate in going after dangerous packages in the mail. CBP has seen this in various enforcement exercises.

At a time when America is using advanced data analytics for scientific and cutting-edge technology research, which are used to better understand sports matchups and decision scenarios, why would we hesitate to use this to enforce our own laws and protect our own citizens from drug cartels?

The time for renewed rigorous federal law enforcement against international drug cartels is now. We must act before the Taliban allows opium production to be further ramped up and before drug cartels, including counterfeiters, are further emboldened. We must use our powerful, untapped information technology and data analytics expertise to keep as much of this poison out of America as possible.