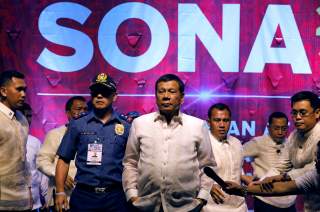 “I will be chartering [sic] a [new] course [for the Philippines] on its own and will not be dependent on the United States,” Duterte declared right after securing electoral victory. Without a doubt, it was an audacious statement from the then newly-elected Filipino president, who was set to take over one of America’s oldest and most loyal allies in history. At first, not many, including those within the diplomatic community, took his words too seriously, with some dismissing the “nationalistic” statements as soaring rhetoric bereft of policy substance.

After all, Duterte himself began to communicate a more pragmatic strand of leadership as he inched closer to formally occupying the highest office in the land. Weeks before his inauguration, Duterte sought to reassure the media that it will be his “last time as a rude person.” Duterte promised that, “[w]hen I become president, when I take my oath of office…There will be a metamorphosis,” whereby he will “steadily [evolve] from a caterpillar [and] blossom into a butterfly.” The same message of reassurance was more than abundant during his inauguration and first State of the Nation Address (SONA) speeches. “On the international front and in the community of nations, let me reiterate that the Republic of the Philippines will honor treaties and international obligations,” he remarked during his unusually subdued inauguration speech (June 30).

During his first month in office, Duterte held broadly cordial conversations with senior American officials. He met Kristie Kenney, counselor at the State Department and former Ambassador to Manila and Bangkok, as well as then Secretary of State John Kerry, who vowed to beef up American assistance to Philippine law enforcement agencies. There were some disagreements over the direction of Philippine foreign policy, particularly towards China in light of the South China Sea disputes, but there was little indication of an outright, irreconcilable rift. In fact, right after Duterte’s election victory, President Obama was the first foreign leader to call and congratulate the new Filipino leader. At this juncture, many observers presumed that bilateral relations would move forward without any major hiccup.

Despite his prior misgivings about America, Duterte was clearly in his pragmatic, Machiavellian mode, realizing that as the president of the Philippines he should initially try to maintain some modicum of stable relations with America, which remains deeply popular among the security establishment and broader Philippine populace. But this didn’t mean that Duterte would stick to the status quo and view Washington with the same level of deference as his predecessors. By now, the strategic terms of bilateral engagement had changed, but only a few noticed it.

Soon, it became increasingly clear that Duterte’s ascent signaled the beginning of a new phase in Philippine foreign policy, particularly in terms of relations with the Southeast Asian country’s chief security partner (America) and chief security concern (China). Under Duterte, relations with America became no longer as special and ties with China became no longer as hostile.

In effect, the former mayor of Davao sought to anchor his country’s foreign policy in a post-American episteme, where Western allies are just a component of a more geographically diversified basket of strategic partners and interlocutors. This was the true “revolution” in Philippine foreign policy under Duterte.

To understand Duterte’s emerging foreign policy, which has jolted both allies and rivals as well as much of the Philippine public, one should analyze the intersection of five key elements.

The first thing to keep in mind is that Duterte’s political success has been built on a full-fledged “antiestablishment” brand of populism, which represents a wholesale—at least in terms of style and rhetoric—rejection of the Philippine political elite and their entire policy paradigm.

For Duterte, the presidential election wasn’t only about selecting the Philippines’ next political leader, but also a referendum on the three-decades-old elite democracy, which replaced the Marcos dictatorship in 1986, but miserably failed—even during its heydays under the Benigno Aquino administration—to deliver on its fundamental promise of freedom and prosperity for the majority of the population.

In this sense, Duterte shares significant similarities with other successful strongmen such as Recep Tayyip Erdoğan and Vladimir Putin, who upended the politics of their respective countries by promising an alternative form of governance and political worldview under a firm and decisive style of leadership. Both Erdogan and Putin, for instance, not only rejected the domestic policies of Atatürk’s and Yeltsin’s heirs respectively, but also their Western-looking foreign policy.

But Duterte’s ability to overhaul the Philippines’ business-as-usual politics and position on the South China Sea wouldn’t have been possible absent his domination, albeit tenuous and temporary, of the political class and, to a lesser degree, the state apparatus.

And this brings us to the second factor, which is the “authoritarianization” of Philippine political system. The rapid concentration of power in Dutetre’s hands, as normal institutions of checks and balances fell into a state of hibernation, provided him a unique space to almost unilaterally refashion Philippine foreign policy.

The third factor is the lack of clear American commitment to the Philippines in the South China Sea. Year after year, the Obama administration refused to clarify whether it would come to the Philippines’ rescue in an event of conflict with China in the South China Sea. In terms of military assistance, Washington, Duterte and his supporters fret, has been significantly more generous, both in quantity and quality of military aid, to countries such as Egypt, which neither face a direct threat from external powers nor have a formal alliance with America.

In a survey conducted between December 6–11 of 2016 by Pulse Asia, a leading public opinion polling body in the Philippines, fifty percent of respondents were either undecided (thirty-three percent) or disagreed (seventeen percent) when asked if “security/defense relations with the US have been beneficial to the Philippines.” That is a remarkably high number in a country, which has had a century-old security alliance with America. The implication is clear: America suffers from a credibility gap, and Duterte has exploited this with conviction and verve.

Interestingly, when respondents were asked in December 2016 whether the “Philippines should explore security/defense cooperation with China and Russia than the United States,” forty-seven percent expressed support. And this brings us to the fourth factor: in contrast to the Obama administration’s strategic equivocations, China made it clear, from the very onset, that it is willing to offer the Philippines both maritime and economic concessions in exchange for Manila setting aside the arbitration issue and, if possible, downgrading ties with America.

In 2016, Chinese ambassador to Manila, Zhao Jian, met Duterte more than any other foreign dignitary. During these extensive discussions, which gained pace right after Duterte’s electoral victory, Beijing and Manila discussed most sensitive issues, including the South China Sea disputes. The Asian powerhouse also made the sticks clear: The Philippines risks military confrontation, diplomatic isolation, and significant foregone investment opportunities if it refuses to change gear in the South China Sea.

Senior Western diplomats often quip that their Chinese counterpart has become a de facto adviser to the new Filipino president. Some have described the Chinese envoy, quite derisively, as “the whisperer,” given his unusual proximity to the Filipino president.

Lastly, it is important to take into account Duterte’s “personalization” of foreign policy. Not only he has strengthened his grip on the state apparatus, but he has also injected more of his own personal emotions into the policymaking process as well as diplomatic pronouncements.

As studies show, the emergence of such Sultanistic administrations is usually accompanied by wild swings, often both in rhetoric and substance, in foreign policy, as has been observed in the case of Turkey (under Recep Tayyip Erdoğan) and Russia (under Vladimir Putin). His tirades against America, for instance, are largely driven by his personal antipathy toward America, which stretches back to his years as mayor of Davao City. These historical wounds were rekindled when America began to criticize Dutetre’s signature policy, the campaign against drugs, in his first month in office.

Meanwhile, China has consistently expressed its support for Duterte’s war on drugs and has offered to help in terms of logistics, equipment, criminal investigations, presidential security and the establishment of rehabilitation center for drug users. Like a small-town mayor perched comfortably among familiar folks, Duterte often cites his own experiences, his personal preferences and his emotions when discussing foreign affairs. His foreign policy-related discussions are more sprinkled with “I, me and my” than any of his predecessors. He has often cited his bitter experiences with foreign powers, particularly during the Meiring incident in 2002 or the alleged visa rejection and how he felt insulted and disrespected by American officials.

To be fair, there is a significant gap between Duterte’s often-hyperbolic rhetoric, on one hand, and the more subdued policy of his administration, on the other. This is largely due to the fact that while Duterte retains high popularity ratings and continues to enjoy firm grip over the other branches of the government, he has had to take into consideration the views of the powerful defense establishment, which toppled two presidents, Ferdinand Marcos and Joseph Estrada, in the past three decades.