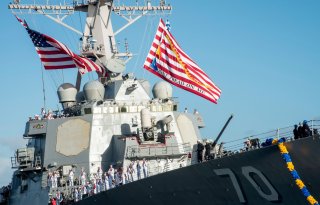 Eighty years ago today, December 7, 1941, critical airfields and ports across Southeast Asia and the Pacific were ablaze and in ruin. In just seven hours, Imperial Japan’s surprise attacks crippled British and American forces in the Far East, exposed the Dutch East Indies to invasion, and pushed Thailand into submission. The bombing of Pearl Harbor was but one of many that day. Casualties of the “Associated Powers,” likely exceeded those in Hawaii. One result of these unprovoked attacks was the creation of alliances that endure to this day.

Japan coordinated attacks on the U.S. territories of the Philippines, Guam, Wake Island, Howland Island, and Midway and the British Empire in Malaya, Singapore, and Hong Kong. Japanese forces invaded and bombed Thailand’s airfields. In Shanghai, Japan took control of the International Settlement after blowing up the last two British and American gunboats on the Yangtze, the HMS Peterel and the USS Wake.

The first attack, seventy minutes before Pearl Harbor, was on British-Indian forces at Kota Bharu, on the eastern side of Malaya. Hours before, a British flying boat was shot down by Japanese aircraft while monitoring the progress of the Japanese fleet. The British Royal Air Force crew and their Royal Australian Air Force observer became the first Allied casualties of the war. The ensuing defense of northeastern Malaya was fierce and savage with high casualties on both sides.

Soon after, Bangkok was bombed, and Japanese troops landed to its south and at various points along the Kra Peninsula on the southeastern coast of Thailand. Again, the invaders met with stiff resistance. Despite determined Thai forces, the fighting lasted only five hours. Prime Minister Plaek Phibunsongkhram agreed to a ceasefire and formed an alliance with Japan. The Kota Bharu landings were a prelude to the drive down the eastern side of the Malay peninsula, while the Japanese troops landed in Thailand advanced with Thai soldiers down the western side to seize Singapore and its naval base—the cornerstone of British power in the Indo-Pacific. Japanese planes bombed Singapore that day in warning.

Japan’s early morning attack on Pearl Harbor on Hawaii’s Oahu, was followed by the bombardments of the American airfields on Midway and Howland Island in the equatorial Pacific. Two of the four Hawaii settlers on Howland were killed. For his selfless defense of Midway, First Lieutenant George H. Cannon became the first U.S. Marine in World War II to receive the Medal of Honor.

Guam was shelled, bombed, and invaded. The American territory fell two days later. Of the nearly 500 American military personnel taken to Japan from Guam as prisoners of war, five were female nurses. Japanese troops occupied Batan Island above Northern Luzon in the Philippines before mounting a full-scale invasion. This approach on Aparri on the coast of Cagayan Valley, believed by American war planners as impractical, caught the defenders off-guard and unprepared. The success of the surprise assault was played out just this past fall when U.S., Filipino, and Japanese forces held their first joint amphibious exercises near this Northern Luzon town.

Six hours after the Pearl Harbor attack, the Japanese bombed Hong Kong’s Kai Tak Airport and pushed the defending British and Commonwealth troops to the defensive Gin Drinkers Line. The territory, however, was long regarded as indefensible. Nevertheless, British, Indian, Canadian units along with the Auxiliary Defence Units and Hong Kong Volunteer Defence Corps (HKVDC) held out for two weeks against a Japanese force twice its size.

The Japanese attacked Wake Island about the same time as they bombed Hong Kong. The Americans on Wake Island were composed of 400 Marines, a handful of soldiers and sailors,  forty-five Chamorro Pan Am employees, and 1,146 unarmed civilian contractors building an airfield. They proceeded to do what had never been done before or after, hold off an Armada for nearly two weeks. They did not surrender until December 23.

The last Japanese actions on December 7 were the bombing of the Iba and Clark airfields in southern Luzon, the Philippines. As in Hawaii, the Japanese caught the American planes on the ground and the defense weak. The guns of neither the aging artillery batteries nor tank battalions defending the fields could reach the high-flying Japanese planes. Whereas the attack on Pearl Harbor damaged the Pacific Fleet, the attack on the Philippines and other U.S. territories destroyed the Far East Air Force.

The first battle casualty of the Armored Force in World War II, Pvt. Robert Brooks of Kentucky’s Company D, 192nd Tank Battalion, took place on Clark Field. Back at Fort Knox, the home of the newly formed Armored Force, the Commanding General Jacob Devers responded to the news by ordering that the main parade ground at the base be named after the young tanker. This distinction was particularly significant as Brooks turned out to be African American.

On December 7, 1941, Japan expanded its war on the Asian mainland south and eastward into the Pacific. The primary objective was to knock out American and British opposition to its advance into Southeast Asia. The ultimate goal was occupation of the Indo-Pacific, control over its valuable natural resources, and supremacy over the region's seas. As the sun set, Japan's success seemed possible.

Instead, the day’s debacles forged alliances with a resolve to fight fascist expansionism East and West. The “Associated Powers” (Britain, the Netherlands, and the United States) became the Allies and expanded to include India, Canada, Australia, New Zealand, and free forces from Japan’s occupied territories. The shared bitter experience of Imperial Japan’s wanton brutality and deceits provided the emotional bond to this warfighting coalition. Ironically, these very alliances are what Japan today looks to in defending its homeland.

Mindy L. Kotler is director and founder of Asia Policy Point, a Washington think tank focused on Northeast Asia. She is also an adviser to the American Defenders of Bataan and Corregidor Memorial Society that represents the American POWs of Japan and their families.