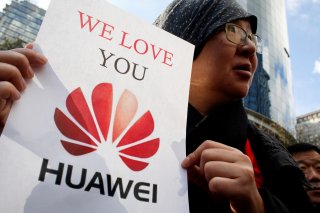 The rise of a hegemonic Chinese Communist Party (CCP) is the uncontested leading geopolitical threat posed this century to the survival of the American republic and the American way of life. The CCP’s full-spectrum threat manifests itself in many forms, including military, diplomatic, and economic means.

Intellectual property (IP) also plays a notable role. China is a serial thief of American IP and trade secrets, and Google’s unfortunate triumph in its recent high-profile Supreme Court case against fellow Silicon Valley behemoth Oracle will, in the words of a Hudson Institute friend-of-the-court brief filed in that litigation, “provide a roadmap” for China to “circumvent U.S. international copyright protection for computer code.” No Chinese company plays a greater role in the CCP’s intellectual property espionage campaign—indeed, it is possible no Chinese company is more closely enmeshed with the sprawling CCP apparatus, in general—than telecom giant Huawei, and it is for that reason that the Trump administration worked so diligently to cut the company off from building the 5G networks of the United States and its allies.

It is against this backdrop that Americans must consider a patent infringement case that Ericsson, the Swedish telecom giant, recently filed against Korean conglomerate Samsung at the International Trade Commission. As summarized by Reuters, “Ericsson said the Samsung products infringing on its patents” in the context of 4G and 5G telecom infrastructure systems “are on the tower side of cellular communications, including antennas, radios and base stations and core network products that wirelessly connect to mobile phones and other cellular equipment.”

Although Ericsson and Samsung have announced a settlement of their dispute, the issues raised by Ericsson’s complaint still deserve attention. The complaints came as both companies were in the midst of patent licensing negotiations, and the peculiar timing seems to indicate that Ericsson’s goal was to inflate the negotiated price to license its patents. Specifically, Ericsson requested that the International Trade Commission (ITC) grant an exclusion order and a cease and desist order that would “stop Samsung from selling or importing the products in question.”

But Ericsson’s exclusion order request, if it had been granted, would threaten the United States’ national security and provide a roadmap to giving China the upper technological hand at a time of grave concerns over Chinese equipment infiltrating U.S. networks. If the ITC granted these exclusion orders, then U.S. companies would likely face a supply shortage of telecom networking equipment from trustworthy providers.

And in this instance, the shoe fits: Ericsson has aggressively lobbied for Huawei to be allowed to sell sensitive IT infrastructure in its home country of Sweden, despite the widely recognized national security threats posed by the Chinese giant. Remarkably, Ericsson’s irksome lobbying campaign included CEO Börje Ekholm reportedly sending a series of text messages to the Swedish foreign trade minister pressing her to review Huawei’s exclusion.

The close ties of Ericsson to Huawei should raise concerns for any future ITC activity and sound the alarm for U.S. national security interests, particularly as pertaining to 5G infrastructure development. A future ITC exclusion order, along the lines of what Ericsson recently requested, would give the Swedish company the opportunity to crush Samsung’s budding competition in the 5G space and potentially open a backdoor to CCP-dominated telecom titans that pose a dire threat to the integrity of next-generation 5G infrastructure. Overall, at a time when the U.S. government is working to prevent Chinese technologists from undermining U.S. security, intellectual property, and innovation, the ITC granting a similar exclusion order to Ericsson would have the precise opposite effect. Such an exclusion order would raise serious national security concerns at a time when all hands on deck are required to oppose the CCP’s spreading of its nefarious communist tentacles across all areas of American life. Despite the settlement, China hawks must remain vigilant.

At a time when the news cycle moves a mile a minute and is nearly impossible to keep up with, it is easier than ever to neglect what may, at first blush, seem like a somewhat arcane and recurring intellectual property tussle between two multinational conglomerates. But while American citizens can be forgiven for failing to stay completely abreast of every nook and cranny of the news cycle, American national security would suffer—and the CCP would be emboldened—if Ericsson were to ultimately get its way at the ITC. A recent ITC victory for Ericsson would have been a victory for Huawei, and a victory for Huawei is necessarily a defeat for the American way of life.