The EU Is Facing an Historic Economic Crisis Thanks to Coronavirus 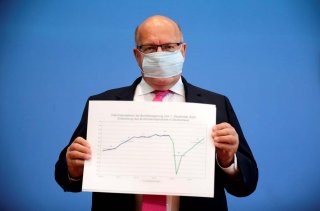 The last thing that a highly indebted and weak European economy now needs is another supply-side shock that could tip it into a double-dip recession and a prolonged period of price deflation.

Yet that is precisely what a renewed wave of the coronavirus pandemic is now threatening to do to Europe. This does not bode well for the European economy nor for the rest of the global economic recovery. This is especially the case given Europe’s large share in the world economy and the real risk that there could be another round of the Eurozone sovereign debt crisis.

Even before the latest wave in the pandemic, the European economy was not in good shape. While the economy did experience a strong bounce from its earlier spring collapse, it still remains well below its pre-pandemic level. As a result, it has now lapsed into deflation.

At the same time, European budget deficits have ballooned as a result of bold fiscal measures taken to fight the pandemic as well as of a collapse in tax collections in a weaker economy. As budget deficits have widened, the public debt levels in highly indebted countries like Italy, Portugal, and Spain have skyrocketed to postwar records. This is now raising questions anew about the ability of those countries to repay their debts.

The pandemic’s renewed wave now threatens to cause a double-dip in the European economic recession, which would exacerbate the Eurozone’s deflation problem. This would seem to be especially the case considering that France,  Germany, Italy, and Spain have all already been forced to substantially roll back the earlier easing in their lockdown restrictions. In the same way that the earlier lifting of the lockdown caused the economies of those countries to bounce, the world must now expect that the reimposition of coronavirus restrictions will cause the European economy to relapse into recession.

Another leg down in the European economy and a prolonged period of price deflation will increase the Eurozone’s debt servicing burden and make it all the more difficult for Italy, Portugal, and Spain to grow their way out of their debt problems. As underlined by their 2010 experience with budget austerity during the Eurozone sovereign debt crisis, any attempt by those countries to improve their public finances by budget belt-tightening would only deepen their economic recessions. Stuck within a Euro straitjacket that has deprived them of their own currencies, those countries would not be in a position to cushion the economic blow of fiscal austerity by reducing interest rates or by resorting to currency depreciation.

A double-dip economic recession would also highly complicate the European Central Bank’s (ECB) fight against deflation, never mind allow it to meet its “close to but below 2 percent” inflation target. With European interest rates already in negative territory, any attempt at interest rate reduction would run the risk of putting further stress on Europe’s already shaky banking sector. At the same time, any effort to substantially increase the size of the ECB’s bond-buying program would run the risk of inviting a strong political backlash against such activities especially in Germany, the ECB’s largest shareholder.

In principle, the Eurozone does have a way out of its present dismal economic predicament. It would be to move rapidly to a fully-fledged fiscal union.  Such a move would allow a large region-wide fiscal stimulus package for Europe of the sort in which the United States periodically engages. That would provide a way of getting around the present constraints on a further budget stimulus that very high debt levels place on those countries in the Eurozone’s periphery.

The fly in the ointment, however, is that such a move is highly improbable anytime soon. It is not only that there is strong German political resistance to any notion of a European fiscal union. It is also that there is similar opposition to such an idea in the so-called frugal four countries of Austria, Denmark, the Netherlands, and Sweden.

At a time that U.S. health experts are warning of a dark U.S. coronavirus winter, one has to hope that U.S. economic policymakers are taking note of the gathering of European economic storm clouds and of the implications that this might have for the global economic outlook. Maybe then they will realize the urgency of finding an early compromise on a large second U.S. stimulus package to ensure that the United States, too, does not succumb to a double-dip economic recession.