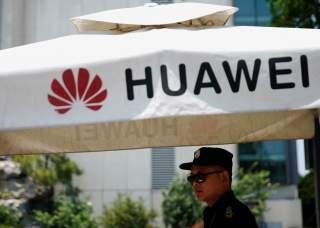 At the conclusion of the Revolutionary War in 1783, Americans already made up the second largest group of traders (after the British themselves) at the famous thirteen factories of old Canton, today’s Guangzhou.

The first American-flagged ship arrived in China in 1784, carrying a cargo of ginseng. Thirty tons of the stuff. They couldn’t think of anything else that China might want. The Empress of China made a handsome profit when it returned to the United States in 1785 carrying tea—and the cups to drink it in.

Then, as now, China ran a huge merchandise trade surplus with just about everyone, including the United States. The United Kingdom, then China’s biggest trading partner, famously turned to drug trafficking to make up its deficit. When China seized an illegal shipment of British opium from India, the United Kingdom declared war.

By contrast, the first treaty between China and the United States, the 1844 Treaty of Wanghia, prohibited Americans from trading opium—and placed Americans accused of smuggling and drug trafficking under the jurisdiction of local Chinese courts.

European countries are infamous for concluding a hundred years of unequal treaties with China. The United States, by contrast, usually promoted an equal and open Pacific trading regime.

When U.S. Marines were sent in to help suppress the Boxer Rebellion (1899–1901), they only advanced far enough to ensure the safety of the foreign civilians besieged in Beijing and Tianjin. At the end of the war, twelve European countries plus Japan extorted an indemnity from China—another unequal treaty. Under the treaty, the United States received an indemnity, too, but after compensating American victims of the war, Washington applied the bulk of the money toward education for young Chinese scholars. Tsinghua University, Xi Jinping’s alma mater, was the result.

In the heat of the Boxer Rebellion, U.S. Secretary of State John Hay formalized America’s long-standing China policy and gave it a name: the Open Door. In a series of diplomatic notes to the United Kingdom, Germany, Russia, France, Italy, and Japan, Hay spelled out American opposition to their plans to carve China into “spheres of interest.” He insisted that any customs duties collected in the ports they occupied should not be kept. Instead, they should be forwarded to the Chinese government.

In a second note to American diplomats, he made clear that “the policy of the Government of the United States is to seek a solution which may bring about permanent safety and peace to China, preserve Chinese territorial and administrative entity, protect all rights guaranteed to friendly powers by treaty and international law, and safeguard for the world the principle of equal and impartial trade with all parts of the Chinese Empire.”

This, at a time when the American embassy in Beijing was actually under siege by Chinese Boxer troops, acting with the support of the Chinese government.

The Most Favored Nation

The United States was the first country to negotiate a reciprocal most favored nation agreement with China, the Burlingame Treaty of 1868. Under the terms of this treaty, China enjoyed the same rights in the United States as America did in China. Anson Burlingame, the American envoy who negotiated it, resigned his post in order to lead China’s first diplomatic mission to Europe. He later became sick and died in a cold Russian winter, giving his life in service to the Chinese government.

Even after the Communists came to power in China, the United States still proffered its “traditional support for the Open Door and for China’s independence and administrative and territorial integrity,” as Secretary of State Dean Acheson put it in the famous but unjustly maligned China White Paper of August 1949.

Acheson reiterated American support for Chinese self-government but warned that any “attempt to engage in aggression against China’s neighbors” would be opposed. The final split with China didn’t come until October 1950, when the Communist Chinese government did indeed “lend itself to the aims of Soviet Russian imperialism,” exactly as foreseen in the White Paper, by intervening in Korea—at the request of the Soviet Union.

A Tear in the Fabric

China regained most favored nation status with the United States in 1979, at first conditionally, and then (in 2000) permanently. When China joined the WTO in 2001, that status was embedded into the very fabric of the international trading system. But free and fair trade is only possible in a regime governed by the rule of law. Without it, treaties are meaningless.

In the nineteenth and early twentieth centuries, the United States consistently stood up for the rule of law in China. American support for Chinese sovereignty repeatedly embroiled the United States in diplomatic disputes with European countries. In 1941, it led to war with Japan.

Today, it is China itself that is undermining the rule of law in China. Donald Trump’s so-called “trade war” is nothing more than an American effort to get China to enforce its own WTO treaty obligations to an open trading system.

The international trading regime centered on the WTO only works when every participant enshrines its international obligations in domestic law. China’s blatant refusal to do this—not just now, but for the last eighteen years—represents a tear in the fabric of the international trading system. And China makes up such a large proportion of global trade that the “patch and mend” approach of the last several decades can no longer cover the damage.

No one outside China who is engaged in the “trade war” debate argues that the rule of law functions properly for American companies operating in China. Until it does, free trade is empty rhetoric. China does not practice free trade. But if the Trump administration stays the course, free trade might finally come to Communist China. Ultimately, that might prove as good for China as for the United States, and for the global economy as a whole.