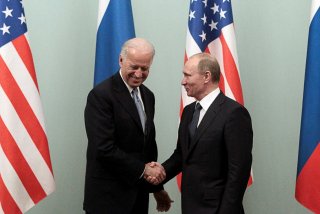 Watching Russians employ old-fashioned Kremlinology in attempting to analyze American foreign policy can sometimes be a surreal experience. A case in point is a new article by Andrei Sviridov in Moskovskiy Komsomolets, a popular Russian newspaper, that concocts a bogus narrative to depict the Biden administration as contemplating a new policy of cultivating possible successors to Russian president Vladimir Putin. Most notably, Alexey Kudrin, head of Russia’s Accounting Chamber, is floated as its favored successor to President Vladimir Putin. But as President Joe Biden pushes for a summit meeting with Putin in June and appears eager to negotiate with him, it would constitute rank unprofessionalism and even schizophrenia to espouse such a course. If the newspaper has secret evidence of Biden attempting to oust Putin, it should provide it rather than indulging in conspiracy thinking.

Instead, Sviridov grasps at straws in an effort to create much ado about nothing in Moscow. The United States must be shifting toward support for Kudrin, he argues, because The Hill and this publication had each published separate opinion pieces urging the Biden administration to reach out to Kudrin as a genuine liberal reformer. The TNI piece was written by Ivan Sascha Sheehan, a professor at the School of Public and International Affairs at the University of Baltimore. The one in the Hill was written by Ariel Cohen, a non-resident Senior Fellow at the Atlantic Council and director of the Energy, Growth and Security Program at a small organization called the International Tax and Investment Center.

In imputing a desire to undermine Putin to the National Interest, however, the newspaper attributes motives where there are none. For a start, as editor of this publication, I can attest that we publish many articles by scholars who provide intriguing perspectives on international affairs, but that they invariably constitute official administration policy would come as much of a surprise to me as to most of our readers. It’s also the case that the Moskovskiy Komsomolets article doesn’t seem to take into account that the National Interest has published dozens of recent articles on the contentious topic of U.S.-Russian relations, many of which offer starkly contrasting views.

We have no fixed editorial position on what policy America should adopt toward Russia; rather, we seek to provide a forum for expert analysis of Russia and other nations, and to offer a diverse range of views on how the United States can understand and protect its national interests. Indeed, since its founding in 1985, TNI has always published multifarious views on international affairs. As it happens, last summer, we published a much-debated article by Putin himself examining and explaining the Soviet Union’s role in the period leading to World War II—and rejoinders to it. The original article by Putin attracted considerable attention in global media, including a news article in the New York Times.

Sviridov suggests that the Hill is far more influential than TNI. Needless to say, the two are very different publications. But we do share a number of authors. And while it is not for us to calibrate our influence, the authors we publish, ranging from former national security advisers to cabinet officials to legislators, speak for themselves.