Follow America’s Lead: Why the West Must Sanction Russian Oil and Gas 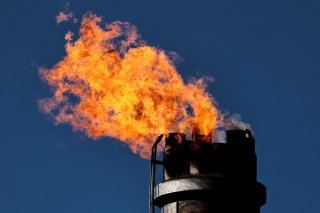 U.S. president Joe Biden announced a ban on Russian energy imports, but now America’s allies must also stop funding the Russian war machine by sanctioning Russian oil and gas. Energy sanctions will carry some costs, yet they are increasingly feasible for the West and a small price to pay to end the Kremlin’s efforts to upend the post-Cold War order.

Even just a few weeks ago, it was unreasonable to assume that the United States, European Union (EU), and NATO could have the resolve to sanction Russian energy, yet the calculus is changing each day. The United Kingdom also announced on March 8, just before Biden’s announcement, that it would phase out oil and oil products by the end of 2022. The EU announced that it would phase out Russian fossil fuels by 2027—too late to constrain the Kremlin’s war in Ukraine raging today.

The numbers speak for themselves. Russian military spending was $62 billion in 2020 while the EU purchased $64 billion worth of Russian energy & minerals the same year, a number considerably lower than average due to reduced energy consumption in light of the Covid-19 pandemic. New 2021 estimates suggest that the EU and United Kingdom’s imports of oil and products from Russia were worth a whopping $104 billion dollars, well exceeding the Russian military budget. Oil exports are Russia’s primary revenue source. In 2021, oil products sold globally earned Russia three times more income than gas exports.

It is no surprise that Washington is taking the lead in the sanctions—it’s in the strongest position to do so among the Western allies. Having emerged as an energy superpower in the past decade, the United States is the world’s leading producer of oil and natural gas. It is also a net exporter of refined petroleum products. Only about 3 percent of America’s oil imports recently came from Russia, while last year that number was about 8 percent.

As it stands, there is little rationale for the United States to keep importing Russian oil, as these small volumes could be made up by boosting America’s own oil production. Even renewables advocate Elon Musk recently wrote on Twitter: “Hate to say it, but we need to increase oil & gas output immediately. Extraordinary times demand extraordinary measures.”

Another alternative for the United States is importing more oil from its current key suppliers such as Canada, Mexico, or Saudi Arabia. Some will point to the 1 percent of oil refined in the United States is Russian due to its unique properties. There are controversial discussions with potentially replacing it with the heavy oil from Venezuela, where its own authoritarian regime has been under U.S. sanctions.

U.S. sanctions on Russian oil will have some but limited domestic implications. Most of the energy price increases will be due to global market panic regarding Russian oil supply and looming sanctions given that Russia accounts for about 8 percent of the global oil trade. U.S. gasoline prices reached a record high of $4.17 on March 8 and could reach $5 per gallon, while global oil prices have continued to soar.

In the European Union, which is dependent on imports for 97 percent of its oil products, sanctioning Russian oil will be more challenging. Today, the European Union buys about one-quarter of its oil from Russia. Countries like Slovakia, Poland, Finland, and Lithuania are among the most dependent on Russian oil imports, but the equation is more impacted by Germany, Poland, and the Netherlands, the leading buyers of Russian crude oil, who account for about half of the EU’s crude oil imports. Yet there are many alternatives to Russian oil today due to the global oil market’s flexibility and liquidity—EU countries would be able to source their oil elsewhere.

Meanwhile, natural gas earns less for the Russian budget than oil but has served as a source of leverage and diplomacy for the Kremlin in Europe and beyond. Vladimir Putin has struck gas deals and developed friendships with a number of European leaders, eventually even employing some of them, like former German chancellor Gerhard Schroeder, former French prime minister Francois Fillon, and former Austrian foreign minister Karin Kneissel, who went to work for Russian state-owned energy companies.

The EU depends on Russia for about 1/3 of its gas imports. Here, diversification against Russian gas will be more difficult but still feasible. Some European countries that have not done their homework in diversification and still remain almost completely dependent on Russian gas include Czechia, Latvia, North Macedonia, Bosnia and Herzegovina, Moldova, and Hungary. Nonetheless, many previously gas vulnerable states like Poland, Lithuania, and Finland have built liquified natural gas (LNG) import terminals and have been able to successfully diversify away from Russian piped gas.

Because of Europe’s interconnected pipeline infrastructure, many states without LNG terminals rely on neighboring countries to tap into the global LNG markets and access to American, Qatari, and Norwegian LNG. The new Southern Gas Corridor natural gas pipeline is also bringing Caspian gas to Europe for the first time.

However, it is the big European gas players that matter more in the equation than the small yet undiversified countries. For instance, Germany is Europe’s preeminent industrial power, largest gas importer, and Gazprom’s top customer on the continent. About 94 percent of German gas needs are met by imports and two-thirds of those needs are served by Russia.

Until Chancellor Olaf Scholz’s recent epiphany, Germany seemed married to Russian gas. After Russia’s invasion of Ukraine, Scholz announced that the Nord Stream II pipeline’s certification is tabled for 2022 and that Germany will aim to build two LNG import terminals. This turn-face was extraordinary since President Barack Obama and President Donald Trump’s diplomacy and even American sanctions were unable to convince Berlin to stop building Nord Stream II.

The costs of reducing Russian gas imports will be most painful for Germany where its Energiewende (energy revolution) policy will close all nuclear reactors by 2022 and phase out coal by 2038—leaving the country with an energy shortage. Germany faces the highest electricity prices in Europe and potential grid blackouts from 2022-2025. Building LNG terminals will also take at least two to three years, so in the meantime, Berlin could opt for smaller, quickly-implementable LNG floating terminals and could take advantage of Warsaw’s offer to connect to the Polish-Norwegian Baltic Pipeline that will deliver Norwegian gas.

LNG imports will remain Europe’s first and foremost solution to its Russian gas dependency. Already by 2025, Europe is projected to account for nearly 15 percent of global LNG demand and that estimate will only grow given the war in Ukraine. Europe’s LNG import capacity, though unevenly distributed across the continent, is 237 billion cubic meters, or 40 percent of Europe’s gas demand, while the share of LNG in the total EU gas imports continues to grow beyond the current 20 percent. American LNG has been growing its market share in Europe and in 2021 met 26 percent of the EU and UK’s LNG imports, followed by Qatar with 24 percent, and Russia with 20 percent—which is also trying to gain a strong foothold into European LNG markets.

Make no mistake about it: sanctioning Russian oil, gas, and other energy sources may be somewhat inconvenient and costly for the United States and its European allies. Yet it is feasible today in the global oil and LNG markets. It is also a cost Europe should be willing to bear to stop funding the Kremlin’s war given that it is an easier option than military involvement. The costs of Ukrainian refugees, bombed-out cities, ruined industries, and devastated agriculture in this “breadbasket” of Europe carry a far greater price. So too would the cost of not stopping Putin’s aggression in Ukraine and waiting for it to spill over into NATO countries.

Dr. Agnia Grigas, senior fellow at Atlantic Council, is the author of The New Geopolitics of Natural Gas, and Beyond Crimea: The New Russian Empire.