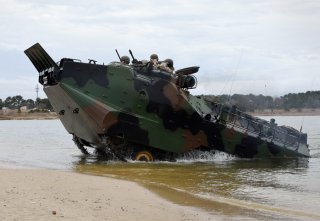 As the United States Marine Corps seeks to organize, train, and equip itself for contending with existing and emerging twenty-first-century security challenges, it has become clear that the developers, advocates, and critics of Force Design (FD) 2030 have very different visions of the future global security environment.

The latest FD 2030 proponent to weigh in on the debate is defense analyst Dakota Wood with his article “The U.S. Marine Corps Has a Choice: Transform or Die.” An advocate for the FD 2030 initiatives, Wood argues that the FD 2030’s proposed technological, doctrinal, and organizational changes are necessary for the Marine Corps to maintain its relevance by developing unique capabilities that will differentiate it from the Army and special operations community.

The developers and advocates of FD 2030 are confident that they alone can successfully interpret military theory, history, technological advancements, and the global security environment. Furthermore, in a historical first, they believe they also have the absolute clarity to apply them to a future organization designed to fight and win as part of a joint force against a peer competitor, China, in the geographical confines of their choosing, the South China Sea and First Island Chain. Rather than engage in an open debate on the strengths and weaknesses of the FD 2030, they neither seek nor desire other viewpoints.

Critics refuse to accept the conclusions drawn by FD 2030 advocates. We agree that the Marine Corps must maintain a current relevant role in the defense establishment, but we see FD 2030 as significantly limiting Marine Corps’ capabilities to respond to global crises and contingencies, undermining a path to future success. Unlike the advocates, we make no pretense that we can clearly see the future and maintain that a flexible and scalable combined arms force is the best contribution the Marine Corps can make to national defense and global security and reduce risk in an unknown future.

FD 2030 advocates maintain that the Marine Corps’ recent experience in the Global War on Terror turned the force into a second land Army, possessing increasingly heavy equipment ill-suited to meet the demands of a fight in the Indo-Pacific region. They support the divestment of combined arms capabilities (those already jettisoned, and others planned) that have been honed over the last half century and replace them with long-range surface, aerial, and unmanned delivered precision weapons designed to help defeat the Chinese People’s Liberation Army Navy (PLAN). They do not define the political or military end state that their vision leads to; instead, they confuse the proposed activity of sinking ships with progress. In their quest to avoid becoming a second Army, they miss that they will instead create a Marine Corps that duplicates strike warfare capabilities already resident in the Navy and Air Force. Marine Corps F-35 stealth fighters flying off amphibious ships to conduct anti-shipping missions is the antithesis of the primary reason Marine Corps aviation was created and continues to exist, which is an indispensable component of the Marine Air-Ground Team. How soon before the question is asked why those aircraft have Marines painted on the side instead of Navy, beginning a slippery slope towards the dissolution of the Marine Air Ground Task Force? The historical strength of the Marine Corps is its ability to take capabilities that the other services singularly possess and meld them into combined arms teams of unparalleled strength and flexibility.

FD 2030 proponents misuse “primary threat” as synonymous with “only threat,” leading to a singular focus on China, while ignoring threats from Russia and challenges in the Middle East, Africa, and the Arctic. These “other threats” are all areas where the Marine Corps can make significant contributions. Also missing is the recognition that the competition with China spelled out in the recently released National Security Strategy, while most pronounced in the Indo-Pacific, increasingly plays out around the globe. While FD 2030 maintains a myopic focus on the South China Sea and First Island Chain, China seeks to expand its reach to the Solomon Islands, Kiribati, New Guinea, across the Pacific to the West Coast of South America, and across the Indian Ocean. Like the war planners in the 1920s and 1930s who envisioned a conflict focused on the Western Pacific only to be stunned when the Japanese decided to open the Pacific War with a simultaneous strike on Pearl Harbor and throughout the expanse of the Pacific, the champions of FD 2030 risk a future institutional Pearl Harbor by opponents who play by a different set of rules than those used by FD 2030 wargames and simulations.

FD 2030 champions make a leap of logic and faith when they claim that the niche capabilities specifically developed to support FD 2030 apply to other potential global trouble spots. “Enemy” magically becomes “enemies” with no support from any war gaming, simulations, or demand from regional commanders. The divestitures proposed and underway to support FD 2030 have weakened the Marine Corps’ combined arms capabilities and threaten to significantly impair Marine Corps’ capabilities to meet worldwide contingency response. The tanks, cannon artillery, engineers, and short-range attack aviation seen as less relevant today are all outgrowths of General Thomas Holcomb’s reimagination of the Marine Corps that Wood rightfully points to as making profound contributions to the victory in World War II. FD 2030 will turn back the clock and return the Marine Corps to a pre-World War II force incapable of conducting large-scale operations. The Marine Corps must be able to respond to a wide range of contingencies and always succeed when tasked, if it is to continue its 247-year history of unparalleled service to the nation. What advocates of FD 2030 propose will ultimately result in an increasingly irrelevant Marine Corps, not its transformation into a force that is adequately prepared to act and serve in the twenty-first century.

Michael P. Marletto is a retired Marine Corps Colonel with over thirty years of service in a wide variety of command and operational assignments. He is a graduate of the National War College and the U.S. Army School of Advanced Military Studies.