Fund Israel's Military, Not Its Settlements 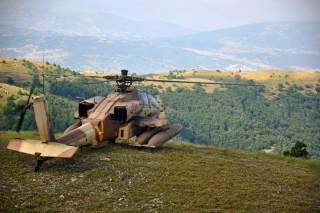 ON JUNE 19, 2016 the Israeli cabinet approved an additional 82 million shekels (about $20 million) for Jewish settlements in the West Bank. At roughly the same time, it was reported that President Obama was seeking to phase out the Offshore Procurement (OSP) program that permits Israel, unlike any other country, to spend just over 26 percent of its total aid package on indigenously produced weapons, equipment and other military products. That program currently totals $815 million, more than twice what the United States spends on any other country, bar Egypt. It has enabled Israel to become a major international arms supplier, at times even competing with American firms for third-country contracts.

There was no linkage between the two announcements. But there should be. Money is fungible, and the money that Washington provides Israel for domestic defense-industrial spending allows Jerusalem to divert funds from its defense-technology accounts to support its settlement projects in the West Bank.

Estimates of just how much Israel spends to support West Bank settlements vary widely, in part because the Israeli Finance Ministry buries its funding of settlements in a variety of accounts. A conservative estimate of spending on West Bank settlements in the past few years amounts to no less than $250 million annually. It is that sum that is indirectly provided by the United States by means of OSP funding.

ISRAEL WAS first granted Foreign Military Financing (FMF) for domestic expenditures in 1977, under an agreement reached two years earlier, when Jerusalem asked for and received permission to use $107 million in FY 1977 FMF funds to develop the Merkava tank (added to the Israeli arsenal in 1979). Several years later, Israel asked for a similar waiver to develop the Lavi multipurpose fighter aircraft, and Congress responded with legislation allowing Israel to spend $250 million of FMF in Israel to develop the Lavi.

The United States, after initially supporting the Lavi, had by 1985, shifted its position and increasingly opposed its production. As the cancellation of the Lavi became a realistic prospect, Congress enacted legislation that permitted Israel to expend OSP funds on programs other than the Lavi, thereby creating other claimants for these dollars. When the Lavi was cancelled in August 1987, the United States agreed to defray Israel’s termination liabilities with its indigenous contractors, even though the largest of them, Israel Aircraft Industries, was a government-held corporation (for a time, its chief executive officer, David Ivri, also served as director-general of the Ministry of Defense). In any event, the Congress went along with the request and agreed to raise the FMF earmark for offshore procurement for FY 1988 to $400 million to defray the cancellation costs of the Lavi program. The Reagan administration agreed to maintain the OSP program at this higher level. Since FY 1988, the Offshore Procurement program has been incorporated into the annual Foreign Assistance Act.

The OSP provision remains unique to Israel; it is not available to any of America’s other allies and friends worldwide. Moreover, with the passage of time, OSP has come to consume an ever-larger portion of military assistance to Israel. By 1991, OSP spending in Israel amounted to $475 million, or about 25 percent of the total level of military assistance to Israel. Beginning in FY 2009, the Congress approved legislation that enabled Israel to spend 26.3 percent of the foreign military-assistance funds to support its indigenous defense industry.

Israel was once a poor country. During the 1980s, as OSP became institutionalized, Israel suffered from runaway inflation. This is no longer the case. Israel is a member of the OECD, the club of the world’s wealthiest states. Its per-capita gross domestic product exceeds that of Italy, Spain, Portugal, Greece and Russia. It rightly has earned the reputation of being the “start-up nation” par excellence. For the better part of the past decade Israel has produced more start-up companies on a per-capita basis than all of Europe, Canada and the major economic powers of East Asia. Indeed, Israel is second only to the United States in the number of companies it has listed on the NASDAQ—second only to Silicon Valley in technical start-ups.

In particular, Israel’s defense industry is one of the most sophisticated in the world. In the early-to-mid 1980s, when Israel was developing the Lavi in the midst of an economic crisis, it was an innovative, but relatively small, arms exporter. Israeli remote-piloted vehicles, as drones or unmanned aerial vehicles were then called, were perhaps the most sophisticated in the world. It even sold a small number of drones, called Mastiff, to the U.S. Marine Corps, which had no such aircraft in its inventory. By the late 1980s, Israel arms sales approximated $1.5 billion, including sales to some nations with which it had no diplomatic relations. Still, it had far fewer markets open to its products: the USSR, China and India were all closed to Israel’s defense industry.

No longer. Israel is now the world’s fifth-largest arms exporter on a per-capita basis, and the ninth-largest exporter in absolute terms. Israel maintains excellent relations with China and India, and has sold billions’ worth of military equipment to both since the late 1990s. The USSR no longer exists, and Israel has sold military equipment to both Russia and many of the Soviet Union’s successor republics. All told, Israel’s arms sales in 2015 amounted to $5.7 billion, to which the OSP program clearly has made an important, if indirect, contribution. In light of its economic prowess and sophisticated arms industry, surely Israel can afford to finance its settlement policy without American funds that, in effect, get redistributed through its domestic accounts.

WHICH BRINGS us back to President Obama’s desire to scale back and ultimately eliminate OSP, and the recent announcement of additional Israeli government support for West Bank projects. Obama is not proposing to reduce the absolute level of military assistance to Israel; he wishes, rather, to transfer OSP funds into Israel’s Foreign Military Financing (FMF) account. The president’s proposal does not compromise the other unique aspects of American assistance—notably, cooperation on missile defense that has resulted in ongoing support since 1988 for Israel’s Arrow program, as well as more recent funding for both Israel’s Iron Dome and David’s Sling antirocket programs. Beginning in FY 2016, Congress passed legislation that provided for American financial support for, and cooperation with, Israel’s tunnel-defense program, which addresses a key threat from Hamas in Gaza. The Obama administration, moreover, is negotiating a ten-year military-assistance agreement with Israel that would increase current FMF levels, in addition to funding line items for rocket, missile and tunnel defense that are part of the Department of Defense budget. The United States produces many cutting-edge military products of its own, such as the F-35 fifth-generation fighter that it will continue to make available to its Israeli ally. In other words, phasing out the entire OSP account would not jeopardize America’s commitment to maintaining Israel’s “qualitative military edge.”

For years Israel has received its military-assistance funds at the beginning of each fiscal year. What if Washington withheld part of that initial payment—not all Offshore Procurement funds, but up to one half of the OSP program that equated to Israeli spending on settlements, their infrastructure and the economic support that sustains them? To the extent that during the fiscal year Israel expended funds on settlement expansion, those withheld U.S. funds, initially earmarked for OSP, would instead be reprogrammed, or transferred from the OSP account, on a dollar-for-dollar basis into Israel’s regular FMF account. Should Israel reduce the level of its support for West Bank settlement expansion and infrastructure, more OSP funds would be made available. Such a policy would force Israel to choose between supporting its defense industry and supporting the settlements, a choice that Jerusalem has never had to make in the past.

The United States has long been committed to a two-state policy in the territory between the Jordan River and the Mediterranean Sea. So is Israel, at least nominally. It is widely recognized, including by the Israeli government, that a one-state solution, in which Palestinian Arabs would never have a state of their own, is impractical. It is not merely a matter of losing the Jewish character of the State of Israel if the Arab population of the West Bank were ever given the right to vote in national elections, something that they have been denied for nearly five decades. Even if the Palestinians were never to attain a majority, they would constitute a large, resentful and embittered minority population, and would pose a constant danger to the lives of Jewish Israelis.

A one-state solution could only work if predicated on the expulsion of Israel’s Arab population, both those living inside and outside the Green Line. This radical notion, which finds favor among a small number of the most extreme settlers, is infeasible. To begin with, no Arab state is likely to accept Palestinian refugees, especially after taking in hundreds of thousands of Syrian refugees (and some Arab states have refused to do even that). Moreover, no Israeli government is likely to risk international isolation, including a rupture with Washington, to implement such a plan. Jerusalem would risk an outright Arab uprising coupled with the potential outbreak of war with its neighbors. In addition, it would confront the real possibility that, in such a scenario, even the United States would not come to its rescue, as it did in the 1973 Yom Kippur War. It is precisely because it has been loath to take such risks that Israel has never contemplated what in other circumstances has been described as “ethnic cleansing.” The truth is that the only solution for Israel is a two-state solution, however difficult it may be to implement.