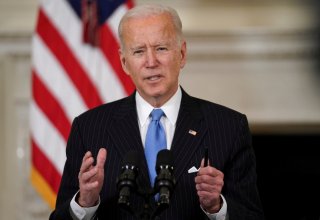 In early March, the Biden administration released the Interim National Security Strategic Guidance 2021, its first official statement of how it understands the United States’ national interests, the threats to those interest, and the appropriate response to those threats.

Although it doesn’t use the term explicitly, the document clearly reflects the view that America’s enlightened self-interest is best served by reversing the ongoing erosion of the liberal international order (LIO) that the United States established in 1945. As the document puts it,

Amid rapid change and mounting crisis, the system’s flaws and inequities have become apparent, and gridlock and inter-state rivalry have caused many around the world—including many Americans—to question its continued relevance. The United States cannot return to business as usual, and the past order cannot simply be restored. But this, too, presents an opportunity—to act, adapt, reform, and embrace bold initiatives that bring like-minded states and influential non-state actors together in new ways. Together with our allies and partners, we can modernize the architecture of international cooperation for the challenges of this century, from cyber threats to climate change, corruption, and digital authoritarianism.

But what is this liberal international order that “cannot simply be restored” but must instead be modernized and made fit for purpose? And is the modernization of this order an appropriate goal of U.S. grand strategy in the years ahead?

According to the prevailing mythology, the so-called LIO is a constellation of international norms and institutions that was created by enlightened American statesmen in the aftermath of World War II in order to avoid a repeat of the missteps that led to first to economic depression and then global war in the 1930s. Drawing on the lessons of the interwar era, far-sighted visionaries like Franklin Roosevelt, Harry Truman, George Marshall, Dean Acheson, Arthur Vandenberg, and Dwight Eisenhower deployed American power to create a peaceful and prosperous world order grounded in liberal principles and enlightened American self-interest.

There were three key elements of this vision of postwar order.

Second, it was meant to be a truly international order. The postwar liberal international order was not envisioned as an American empire. Rather, it was imagined as a truly multilateral system comprising at least nominally equal states cooperating politically and trading economically. American leadership was assumed to be both necessary and welcome; American rule and domination were not. Moreover, the LIO was envisioned as being (or becoming) truly global in scope—a planetary “federation of free states,” even if they didn’t use that Kantian language.

Finally, it was meant to be a peaceful order. The postwar LIO was meant to eliminate the scourge of war by, on the one hand, eliminating the beggar-thy-neighbor economic practices believed to have been at least partly responsible for the outbreak of war in 1939, and on the other by creating a better system for the peaceful resolution of disputes than the failed system constructed in the aftermath of the First World War.

Did such an order ever exist? Did the vision of the American wise men ever come to pass? In a word, No. Since 1945, there have been three iterations of what we continue to mislabel the LIO—none of which have been particularly liberal, truly international, or even terribly orderly.

The first iteration, lasting from 1945-1991, was the era of the “Cold War order.” This was in fact two discrete geopolitical orders, tenuously linked by a few institutions like the United Nations. Within that overarching structure, the United States created the first “actually existing” LIO—typically referred to as the “free world”—the first LIO. This was an association of democracies and anti-communist authoritarian regimes that coexisted uneasily with a parallel Soviet-led Eastern bloc and that competed with it for global domination. While the victorious United States initially dreamt of building a truly universal order capable of promoting a thoroughgoing liberalism around the globe, that project foundered on the shoals of the Cold War. What remained was an attenuated system of “managed trade” constructed behind a defensive carapace designed to keep the Soviets at bay. Floating above this bipolar order was a UN Security Council that was less the mechanism for peaceful conflict resolution its founders had hoped it would be than an arena in which the two superpowers competed for power, influence, and legitimacy. It was an order that displaced great power conflict into the developing world—inflicting millions of fatalities and making a mockery of the concept of peaceful order.

In the aftermath of the Cold War, that “free world” evolved into what was ambitiously, if without a firm grasp of the provenance of the phrase, called the “New World Order.” This was the moment when the postwar liberal project was reanimated as neoliberal globalization—that is, as the project of remaking the fragmented world of the Cold War into a single global community made up of liberal states linked by liberal institutions and underpinned by a single global market. But, as had happened in the late-1940s, this project proved ill-starred. Despite the initial euphoria occasioned by the demise of the Soviet Union and the absorption of many of its successor states into the “free world,” this project too ground to a halt; first in the killing fields of Iraq and Afghanistan, and then in the hollowed-out rustbelts of the post-industrial global North.

That brings us to today’s “rules-based order.” Some have suggested this is the LIO of the future—truly liberal, all-inclusive, and ordered around an agreed set of rules and a respected constellation of institutions that will promote peace, prosperity, and freedom. But this is far too Panglossian. To begin with, while this rules-based order may be more inclusively multilateral than its Cold War ancestor, it decidedly less liberal than any of its predecessors. Politically, the rise of China, the spread of populism/nationalism in the Western democracies, the upsurge of authoritarianism elsewhere, emerging regional orders, a general sense that democracy and liberal economics are not delivering the goods have left liberalism in retreat around the world. Whatever else the existing rules-based order might be, it is not a group of countries with common goals and shared commitment to preserving liberal values, norms, principles, and institutions. Indeed, many of its institutions have been captured by decidedly non-liberal powers, and many of its norms have been watered down to the point where they are little more than lowest-common-denominator ideals that are unobjectionable to liberal and authoritarian countries alike.

Which brings us back to the Biden administration’s interim strategic guidance. While signaling a recognition that the international environment has evolved in ways that pose a number of novel threats to American interests, the document leaves little doubt that the core threat is the continuing erosion of what is left of the American-built liberal order. Nor does it leave much doubt regarding the appropriate response to this challenge: The United States should focus on shoring up and modernizing the existing rules-based order and on resuming its role as an active leader of that order.

But does this make any sense? That depends. If, despite the rhetoric, the goal really is little more than reflexively defaulting to geopolitical nostalgia, attempting to breathe life into failed and only nominally liberal institutions, or merely reentering international agreements that are either toothless or downright harmful, then the answer is no. That is a strategic dead end.

But if, on the other hand, the goal really is to build a new coalition of countries sharing a commitment to liberal-democratic values, norms, and institutions—something like the D10 proposed by British Prime Minister Boris Johnson or a similar alliance of democracies—then the answer is yes. Such a strategy could have geopolitical legs.

Which course will the Biden administration take? Only time—or perhaps the full National Security Strategy, due out sometime over the next year—will tell.

Andrew Latham is a professor of political science at Macalester College in Saint Paul, Minnesota and a Research Associate with the Centre for Defence and Security Studies, Canada.  He has a Ph.D. in Political Science, with a concentration in International Relations and Strategic Studies.