The Irrational Logic of Leaving Troops in Iraq 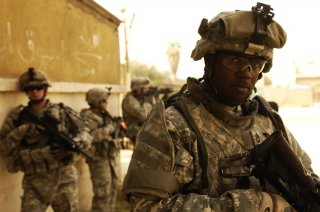 Iraq does not need “direct and military support, and support on the ground” from the United States, new Iraqi prime minister Mustafa al-Kadhimi said in an interview last week before his visit to Washington. His country might want U.S. “cooperation and assistance” at different levels in the future, Al-Kadhimi allowed, depending on “the changing nature of terrorism’s threat.” But the support he mentioned—military training and arms provision—would be a marked drawdown from the current U.S. role in Iraq.

American policymakers should take notice. After seventeen years of fighting, the war in Iraq is a demonstrable failure—and yet a failure with no end in sight.

The Trump administration has repeatedly promised to draw down the U.S. military presence in Iraq, but it’s not clear President Donald Trump really wants to leave. Apparently unguided by any coherent strategy, he threatens further escalation as easily as he condemns the initial invasion. His passion for ending “endless wars” is perhaps not all-consuming.

There are about five thousand American troops in Iraq now, basically the same deployment level as when this administration began. When the Iraqi parliament in January demanded all foreign troops leave their country, the administration rejected the request. “At this time, any delegation sent to Iraq would be dedicated to discussing how best to recommit to our strategic partnership,” said the State Department, “not to discuss troop withdrawal.”

This is unsurprising, as key administration advisers evince no urgency toward departure: the commander of U.S. Central Command, Marine Corps Gen. Kenneth F. McKenzie Jr., is open about his belief that the United States should continue to occupy Iraq forever, perpetually on hand to combat remnants of the Islamic State or whatever group succeeds it. Secretary of State Mike Pompeo on Wednesday promised the U.S. military would be busy in Iraq for a long time to come, refusing to discuss the possibility of withdrawal, asking reporters “not to focus on that.”

This dallying stasis is dangerous and counterproductive to U.S. security. It keeps U.S. forces needlessly in harm’s way, exposing them to unnecessary risks in pursuit of impossible ends. It is a constant opening to war with Iran—Trump has openly said he views Iraq as a base to “watch” Iran and, presumably, attack if he doesn’t like what he sees—which we ought to be avoiding, not courting. It is also a self-perpetuating chaos, as another of Al-Kadhimi’s comments shows. Recent militia attacks around the Green Zone, the fortified area of Baghdad including the U.S. embassy that was known as “little America” for years following the 2003 invasion, “are the result of many years of conflict,” Al-Kadhimi said. “It is not surprising then that criminals work here and there to destabilize security.”

U.S. withdrawal would not magically pacify Iraq, of course. But neither is the ongoing U.S. military presence a neutral condition, nor, whatever Washington might like to assume, a self-evident positive. It has unintended consequences, as the rise of ISIS in the post-invasion power vacuum showed well. The extremist groups that plague Iraq have always “derived some of their support on overt opposition to foreign (read: Western) interference in the Muslim world,” and they still do so today, notes Harvard’s Stephen Walt at Foreign Policy. “Guess what? Foreign powers are still interfering in the region,” he continues, and “[a]s long as this level of foreign involvement persists, the Islamic State and its brethren will be able to win a few recruits.” Staying in Iraq after repeated, explicit Iraqi requests for our departure will only help extremist recruiters, like ISIS among the Sunni population and pro-Iran factions among the Shiites. To a real extent, our presence in Iraq occasions our presence in Iraq, and the longer Washington stays without Iraqi support, the worse the consequences of staying will be.

But we do not have to stay, and Al-Kadhimi’s remarks could provide the opening to departure. The case for leaving is simple: Iraq says it doesn’t need American boots on the ground. Polling shows three in four Americans support withdrawing our troops. Prolonging U.S. military intervention is making it more difficult for Iraq to achieve stability and sapping American defense resources.

Staying in Iraq is a bad strategy, bad politics, and detrimental to peace. After seventeen years, it’s time to go.

Bonnie Kristian is a fellow at Defense Priorities and contributing editor at The Week. Her writing has also appeared at CNN, NBC, USA Today, the Los Angeles Times, and Defense One, among other outlets.