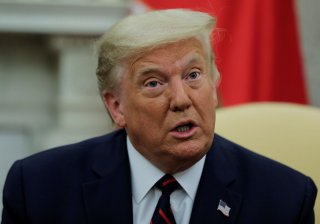 President Donald Trump said that the United States will be “leaving shortly” from Iraq as the two countries promised a “new phrase” of military cooperation in a joint statement.

Iraqi prime minister Mustafa Kadhimi is visiting Washington as the U.S.-led mission against the Islamic State (ISIS) winds down. The United States promised to keep up cooperation with the Iraqi government even as U.S. troops withdraw from the country.

“We were there, and now we’re getting out. We’ll be leaving shortly. And the relationship is very good,” Trump told reporters alongside Kadhimi on Thursday. “We’re making very big oil deals. Our oil companies are making massive deals. And that’s basically the story.”

Kadhimi thanked the United States for its support against ISIS, adding that “Iraq is open for American business and investment and for a better future for Iraq and Iraqi people.”

The Iraqi government has signed deals with General Electric, Honeywell UOP, and Stellar Energy during Kadhimi’s visit, as well as memoranda of understanding with Chevron and Baker Hughes, according to a joint U.S.-Iraqi statement released on Wednesday.

The statement also said that the U.S.-led military coalition in Iraq will “transition to a new phase focused on training, equipping, and supporting the Iraqi Security Forces.”

U.S. military forces re-entered Iraq in 2014 to combat ISIS and prevent a genocide against the Yezidi people.

Over the next six years, the U.S.-led coalition successful liberated all of the territory taken by the Islamist group, and U.S. military intelligence assessed in June 2020 that ISIS had been reduced to “localized” attacks.

But the U.S.-led forces have been increasingly caught up in the U.S.-Iranian conflict. Clashes between U.S. troops and Iranian-backed militias in Iraq led to a near-war in January, when Trump ordered the assassination of Iran’s Major General Qassim Suleimani as Suleimani was visiting Iraq.

The clashes continued more quietly over time and pushed U.S. forces to speed up their withdrawal from Iraq over the next few months.

“We’ve brought it down to a very, very low level,” Trump said during his joint press conference with Kadhimi. “When somebody hits us, we hit back harder than they hit us. So we handle it.”

“We have been taking our troops out of Iraq fairly rapidly, and we look forward to the day when we don’t have to be there,” he added.