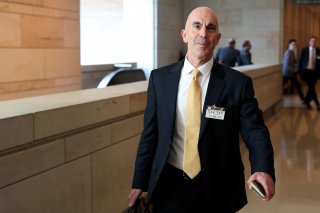 It started with an arms deal with Saudi Arabia. It ended with the surprise killing of an Iranian major general and ballistic missiles in the sky.

And it has implications for the U.S. Constitution far beyond Middle Eastern conflicts.

This would not be the first time, however, that String tried to consolidate Trump’s authority over war and peace. The arms sale, the killing of Maj. Gen. Qassim Suleimani, and the alleged attempts to quash Linick’s investigations were all part of a monthslong power struggle between Congress and the President.

Trump’s officials are reading from a playbook left by the Obama administration—and they’re leaving plenty of legal tools for the next president to use as well.

String became the State Department’s top lawyer on May 24, 2019. That same day, Trump and Secretary of State Mike Pompeo declared a state of emergency in the Middle East, allowing him to sell weapons to Saudi Arabia without asking Congress.

Pompeo wrote to lawmakers “that an emergency exists which requires the immediate sale” of $8.1 billion in weapons to Middle Eastern kingdoms “in order to deter further the malign influence of the government of Iran throughout the Middle East region.”

Former high-level Pentagon official Andrew Exum testified on Wednesday that such a move was never “part of the discussion” in 2015 and 2016—but Congress has not successfully overturned it so far.

Assistant Secretary of State R. Clarke Cooper denied that the emergency declaration had any role in String’s promotion. But Pompeo had apparently ordered officials to justify the arms sale however they could, running into opposition from more seasoned career officials,

The move also ran into opposition from Congress, which asked Linick to investigate both the declaration and String’s role in writing it.

Linick told Congress earlier this month that Under Secretary of State Brian Bulatao, a personal friend of Pompeo, had “sometimes . . . tried to bully me.” In one instance, Linick said, Bulatao and String approached him to say that the Saudi-related emergency declaration “was a policy matter not within the IG's jurisdiction.”

This is because, as Linick explained, “we don't engage in policymaking” but investigate “whether it's being carried out in an efficient, effective manner, and whether it's complying with rules and regulations.”

In other words, Linick thought that there could be a legal issue with the arms sale to Saudi Arabia, while String believed that it was a political question and up to the president.

Pompeo has denied firing Linick over any investigation. Instead, he has described him a “bad actor” in the State Department.

Meanwhile, String was engaged in a debate over presidential power that ended in a bloody confrontation between the United States and Iran in the first week of January.

Rising tensions with Iran began to worry congressional Democrats, especially as Pompeo attempted to draw connections between Al Qaeda and the Iranian government that could be used to justify a war.

Brian Hook, the State Department official in charge of Iranian affairs, told Congress on June 19, 2019 that “there is no talk of offensive action” against Iran but a “defensive move” is possible. He repeatedly told lawmakers to ask String’s office for more information.

The next day, Trump came within minutes of launching airstrikes on Iran to avenge a fallen U.S. drone.

The House Foreign Affairs Committee asked String for the Trump administration’s legal opinion on war with Iran. They focused on the Authorizations for the Use of Military Force, two laws passed in 2001 to green-light the campaign against Al Qaeda and, in 2002, to authorize the invasion of Iraq.

The State Department wrote back stating that it currently does not interpret either law as “authorizing military force against Iran, except as may be necessary to defend U.S. or partner forces engaged in counterterrorism operations or operations to establish a stable, democratic Iraq.”

But String accepted very few limitations on the president’s power when the Senate Foreign Relations Committee asked him to testify in July.

He acknowledged during a question-and-answer session that any military strike would have to be “necessary and proportionate” under international law and serve “a precise national interest.” And he said that only Congress can “take the nation to war in a constitutional sense.”

President Barack Obama, however, had already set the precedent for going to war without calling it war “in a constitutional sense.”

In a scene that would later echo with Pompeo’s push to sell weapons, Obama reportedly looked for a legal justification for war in Libya over the objections of career officials—and found one from the State Department’s legal advisor.

The Department of Justice later produced a legal opinion justifying why the president did not have to ask Congress.

The same argument bubbled up again in January 2020—this time, from Republican members of Congress.

After a few weeks of skirmishes between Iranian-backed militias and U.S. forces in Iraq, the President had U.S. forces kill Suleimani outside of Baghdad International Airport. Iran responded by launching ballistic missiles at a U.S. airbase, injuring over a hundred Americans.

It was an unprecedented, direct clash between the two militaries. Democrats almost immediately proposed a resolution that would order the President to “terminate . . . hostilities” with Iran.

“There is no clear line of delineation between actual war and the use of kinetic force,” Senate Foreign Relations Committee Chairman Jim Risch (R-Idaho) argued during a debate over the resolution. “There are things on this earth where we know it when we see it, but we can't define it.”

The Trump administration itself was reluctant to show its legal justifications in public.

The president first notified Congress of the attack in a classified memo and a classified briefing. String, Hook, and Deputy Assistant Secretary of State Joey Hood offered lawmakers a full hearing in late January, this one also classified.

Sen. Chris Coons (D-Del.) and Rand Paul (R-Ky.) said that they left the room with no “meaningful answers.”

Publicly, the Trump administration claimed that Suleimani was plotting an “imminent” attack on U.S. troops, but then switched to stating that killing him was a move to “restore deterrence” against Iran.

The administration finally released an unclassified memo justifying the operation the next month. Lawyers wrote that Suleimani was killed to stop Iran’s “strategic escalation” of violence in Iraq—and left the door wide open for the next president.

“Article II of the United States Constitution, empowers the President, as Commander in Chief, to direct the use of military force to protect the Nation from an attack or threat of imminent attack,” the administration lawyers wrote, “and to protect important national interests.”